“There’s A Tremendous Difference Between A Pansy & A Chimpanzee” …But both use gasoline? 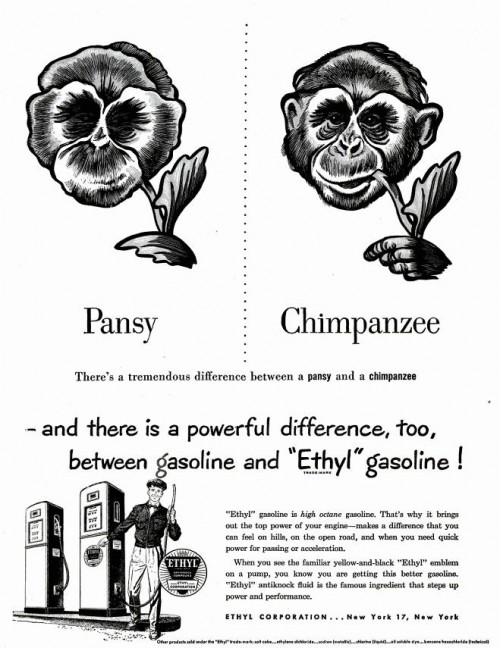 Vintage ad for Ethyl Gasoline, found in a 1950 Life Magazine; via GeriADtric.

Via the fabulous Chateau Thombeau, we find out just who robbed the rainbow to make us look gay — hey, why isn’t this guy in the Skittles ads? I bet he sounds just like the new Chester Cheeto.

I love drag queens because they can dress like women but without all of the pressure to look pretty or be sexy. I know there are plenty of women who dress like drag queens but they are few and far between and they tend to be Pop stars.

Umm, I could be wrong here, but I’m pretty sure the sole point of being a drag queen is to look pretty and be the (supposed) feminine ideal of sexy. 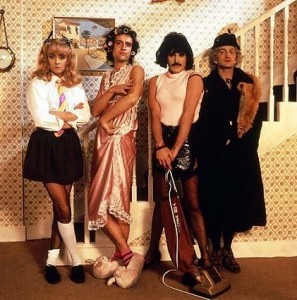 The simple & pure existence of a mustache sort of illustrates that point — and my point about a boundary pushing performance.

Danielle gets close to those distinctions when she writes the following (exactly as typed at her blog):

To me anyway, Drag culture is as much about attitude as it is about aesthetic. It seems to exude a sort of ‘Don’t give a fuck’ attitude which I think everyone could benefit from. Ultimately there is a humour born from sadness underlying the aesthetic. The theatricality used as a kind of armour against a world that is so un accepting of others.

If I could be a part of either world I just feel that I would be freer some how. I find myself, inpsite of a vast collection of clothes and accessories, dressing drably from day to day. I guess I fear judegement by small minded people and on a deeper level just want to dissapear sometimes (hard to do with electric coloured clothes, spiked accesories and gigantic hats).

The mythical non-mustached Drag Queen Mercury, like other Drag Queens, probably would have had a female name and completely distinct female persona to go with it. And none would have seen drag as an armor but as flamboyant exhibitionist expression — that people would still sling arrows at.

Mercury in drag wasn’t exactly like Travolta in Hairspray; Mercury’s dress was a theatrical application, use of imagery to make a point. Or at least a slightly different point.   And the whole point of Freddie Mercury et al and their obvious appearance as men in women’s clothing (along with other things in this video and aspects of Mercury’s life) was to expose absurdity, especially the norms of “normal,” to break free of everything — everything except that vacuum, that is. *wink*

The amazingly cute and gay lyrics to The Naughty Little Clock:

There once was a frivolous and giddy little clock,
A little French clock very gay;
Very trim and very neat but a creature of deceit,
When you wished to know the time of day.
It’s goings on would shock
The old hall clock, Till it held up its hand aghast;
I’m sure to tell the truth, It went wrong in early youth,
Had a natural inclination to be fast.

Chorus:
Tic-toc, tic-toc, said the silly little clock,
“Oh, life in the house is slow,
So cold and grim, very dull and prim,
I’m getting run-down I know”
So she sighed all day for a life more gay,
She longed for a shady past.
This naughty little, haughty little clock, tic-toc,
That had an inclination to be fast.

“I’m quite wound up,” declared the giddy little clock,
“I’m weary of the mantel shelf;
For years I’ve had to chime to give other folks the time,
Now I’d like to have a time myself.
I’d even run away
With a gay roué,
If he’s show me the town’s great sights;
So she took up with a lamp,
And incorrigible scamp,
Who smoked and always went out nights.

Tic-toc, tic-toc, said the foolish little clock,
“Oh, won’t you elope with me?
I’m yours from today if you’ll take me away
Where something of life I’ll see.
Well, they ne’er came back and the bric-a-brac
Had scandal enough to last
In gossiping about the little clock, tic-toc,
That had an inclination to be fast. 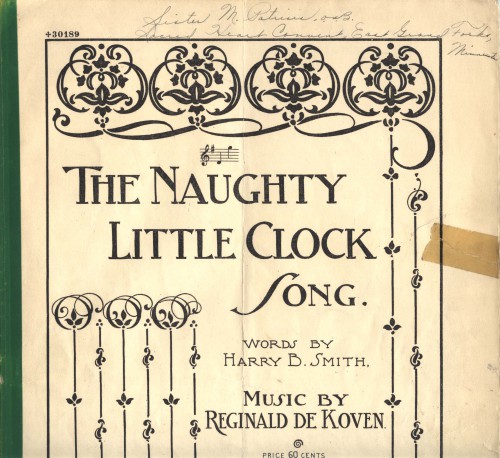 Copyright 1899; music by Reginald De Koven, lyrics by Harry B. Smith. (My copy of the sheet music states that the copyright was assigned 1930 to Theodore Presser Co.)