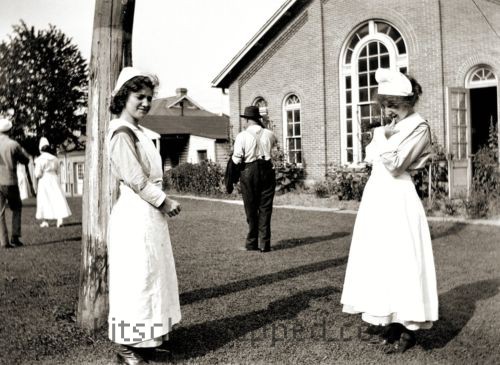 While nurses, like secretaries, may have been grudgingly accepted as appropriate occupations for women, the stereotypes about them were dangerously fed to men & women alike. And books like Cinderella Nurse by Jane Converse only helped the sexist notions.

This retro paperback novel, published in 1967, was part of not only A Signet Nurse Book series, but part of a very long line of nurse novels, mostly designed to make girls (and women) moon-eyed over the career — not for its noble work in healing, not for its healthy paycheck, but for its lucrative lure of marrying a rich male doctor. As such, Cinderella Nurse has a cast of comic (yet infuriating) characters — which were supposed to be serious lessons regarding society’s moral compass.

Before we get to our heroine, Rita Ambler, there’s her “eccentric” mom who finds “her answers in the cards” and other things “occult” — on Rita’s salary. And Rita’s “beautiful” sister, Nadine, who “can’t say no” (to anything but responsibility and nursing school) and yet the spoiled brat has devious plans…

At work, Rita’s supportive female cast includes Head Nurse Eloise Carrington, nicknamed “Giggles” because, of course, she is anything-but. “Giggles” is the old maid who has foolishly spent her life dedicated to healing — and the love-from-afar of a doctor she can never have (one who mocks “Giggles” & pursues our nurse Rita as well).

Rita doesn’t have a BFF, but the only friendly associate at work (or anywhere else) and therefore can loosely be called a “gal pal,” is nurse Connie Howell. Nurse Connie is a slutty but harmless-because-she’s-a-comical-hoot-of-a-cougar — as well as a good dedicated professional. But when Connie has a career high in which she assists in an operation — “not as a scrub nurse, as an operator” — she proves she’s at the hospital to go from RN to MRS and marry herself a doctor. Despite this professional thrill, nurse Connie doesn’t even consider pursuit of advancing her career but instead concentrates on young residents… And, of course, falls for the unrequited love Rita once had.

But it’s our heroine, nurse Rita, who is probably the worst of all pandering role models in this book.

Long suffering, self-abusive, her first chance at love with Glenn Seabrook was ruined by her inability to stop being a “dishrag” or doormat for her widowed mother and younger spoiled sister. That’s what we are sold on. But really, Rita’s failed at love because she’s failed to make herself a dishrag for hubby-to-be. Glenn can’t stand Rita’s kowtowing — and she must prove she’s no dishrag by kowtowing to his wishes and dropping the caretaker’s role in her family. When Glen won’t marry Rita because he’s too proud to live off of her nursing salary while he continues his very important doctor education, the couple splits up.

This has all happened before our book begins and we meet over-worked and under-appreciated Rita after she has soiled herself with a failed marriage.

To make her likable — pitiable, even — she’s redeemed by widowhood (via the tragic death of her frivolous alcoholic husband) and plays the dutiful mother to her son, Timmy (who has the only smiles she lives for, the only arms who wait for her) while she supports her family (lazy-kooky mom, lazy-yet-plotting sister, and tiny lovable tot).

In just 128 pages, we also encounter not-quite-funny comedy of errors (misunderstandings which keep lovers apart, end friendships, force our lovely nurse into another bad relationship with another drunk — excuse me, “alcoholic”), a near-death by criminally drug-induced abortion, and almost remarkably, some sort of (twisted for the dishrag character — but typical for the genre) pride which keeps Rita from advancing upon her romantic goals and having a lifetime of bliss.

Along the way, the best friend, Nurse Cougar Connie, has to be lost because Nurse Cougar Connie can’t handle losing the man she loves to her friend, Rita — no matter how amicably she feels towards the couple, even sacrificing herself to reunite the lovers.

In the end, it’s the love her child which is said to force Rita to make the tough choices & win herself the man she loves — but only upon hearing that Glenn loves her.

It is supposedly convenient, in terms of book length, for mom & sister to send themselves packing at this time. They run off with money obtained from the wealthy doctor in town who wishes to cover-up the fact that not only did his son knock Nadine up but is the person responsible for giving Nadine the near-fatal Ergot. (I could applaud that the author didn’t give us the standard evil girl fakes pregnancy plot, but we are given the equally typical morality of Evil Immoral Nadine using an abortion juxtaposed against Good Girl Nurse Rita becoming a mother.) In any case, when the lazy money-hungry duo leave town, they leave a huge legal issue for our nurse Rita who is suspected of at least dispensing the Ergot — but the author has decided just-never-you-mind-that because our heroine’s got her baby a daddy & herself a man!

The final words of the book leave us with the happy couple discussing nuptials and the love nurse Rita & her son have for their soon-to-be new names. We are, thankfully, spared the “Mrs. Dr.” part; but one doesn’t need any real imagination to see the writing on the wall…

Eventually, Rita will be the alcoholic.

Or maybe I’m just reading to damn much into this.

Astonishingly, aficionados of nurse novels claim that books by Cinderella Nurse author Jane Converse are “more sophisticated” than most — of course, you’ll have to decide for yourself if that comment, posted by Jenny here, is accurate or not:

Speaking from experience: the story lines of most nurse books make the plot of any episode of Scooby-Doo look like Plato’s “Republic”—in the original Greek.

I say most nurse books, because the story lines of the more sophisticated nurse books (“Cherry Ames,” “Sue Barton,” any Jane Converse) only make Scooby-Doo look like, say, “Hedda Gabler”–or maybe “The Mill on the Floss”–in comparison.

I can’t say that Cinderella Nurse is a good book; but I can’t say it wasn’t worth the read either… For 50 cents, I was able to sigh, groan and rant — which has some value. So perhaps, given it’s short length & low price one could say that this retro nurse romance novel (for others are not quite as bad) is a fine beach read — provided you & the girls are at the beach with margaritas. You’ll have plenty of snark to rim your glasses with.