For a decade, from 1974 through 1984, Happy Days was one of the most popular sitcoms on television. While the show was supposed to be centered on Richie Cunningham (Ron Howard) and his family, quickly the star of the show became Arthur “Fonzie” Fonzarelli (Henry Winkler). So much so, that in 1980, the Smithsonian honored the Fonz and the series for it’s role in American pop culture history by putting one of the Fonz’s leather jackets on display — and there’s even a Bronz Fonz in Wisconsin memoralizing the TV series. But when I brought home the Happy Days game from the thrift store (a paltry $1.75), neither of our girls (age 19 and 12) even knew what or who the heck we were talking about.

I guess our rigid TV limits prevented them from mindless hours of channel surfing & the discovery of reruns.

But I never let stuff like that, be it the ignorance or the distaste of others, stop me from enjoying a new-to-me find.

I cleared the table and invited them all to play Happy Days, “Fonzie’s Real Cool Game By Parker Brothers”, © 1976 Paramount Pictures Corporation. 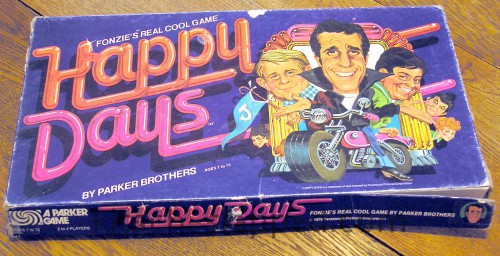 The instructions sheet states the goal of this retro board game as follows: “Heeeeey… the Fonz is hangin’ out at your house. Show him how cool you really are by being the first player to collect 16 cool points and light up Arnold’s juke box.” Which doesn’t tell you much — other than you’ve somehow appropriated Arnold’s juke box and are keeping it at your house. Or maybe the Fonz did the liberating? I don’t know.

In reality the game is based on collecting cool points; but you don’t spend time at your house or anyone elses (with or without the Fonz). In fact, landing on your home space or another home space can cost you in cool points. But I guess I’m expecting too much story from a story-based board game.

The game is pretty simple. In theory. I’m not saying the ages 7 – 13 thing is off; I’m just saying that it’s more complicated to explain without typing the entire instruction sheet.

OK, picture playing Monopoly. You start with some money (in this case, a $3 allowance) and your playing piece starts at your own color-coordinated home rather than “Go”. Unlike Monopoly, you also get a Somethin’ To To card, have a peg in the juke box “cool meter” (with one cool point granted to you), and you only have one die to roll. 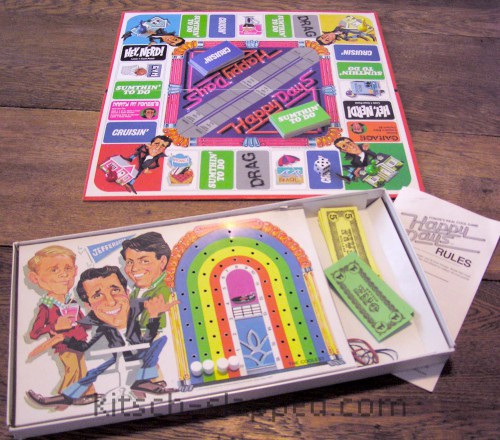 Round & round the board you go, going on dates, hanging out with pals, earning allowance & money for odd jobs (so you can hang out and go on dates) — plus earning and losing cool points. 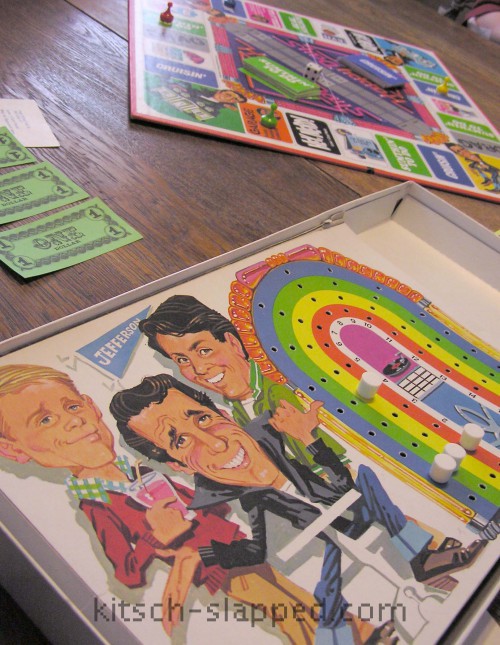 The game is not monotonous. Along the way, you or another player may draw a Crusin’ card, which will direct you all to “stuff a telephone booth” or “play the pinball machine” — the winner of which, selected by being the high roller, gets two cool points. Of course, you can loose cool points whimsically too. Like when another player draws a Crusin’ card which says “knocked over Fonzie’s bike” or “the Fonz catches you wearing colored socks”. The penalty point loss isn’t given to the player who drew the card; they get to play it against an opponent.

But by far, the most fun are the Drag spaces on the board.

When you land on one of these two spaces, you get to challenge any other player to a drag race. Should anyone chicken out, the chicken loses a cool point and the other gains a cool point. Ah, but if you race, the action moves to the center of the game board, where you roll the die to see who reaches the finish line first — be careful, because you could spin-out or have an engine stall! The winner of the race gets two cool points and the loser is moved to the “Hey, Nerd!” space of the winner’s choosing, where he or she loses a point. Plus the winner of the drag race gets to place themselves anywhere they’d like on the board.

So while the game play is pretty simple, the game action is rather varied — and we all had a blast.

I know what you’re thinking — I’m a silly board game geek and a lover of retro chic, so of course I liked it, and therefore I’m probably imagining that everyone else did too. Plus, I won the first game. But honestly, the kids insisted on playing three more games (Des, the 12 year old, won twice) — and both girls whined when hubby & I had to call it quits for dinner.

And the rest of the night, “Hey, Nerd!” was shouted and giggled at one another for any old thing. Not just by the kids either.

So I totes recommend the retro Happy Days board game; it has not jumped the shark. It’s even fun if you don’t know the show. 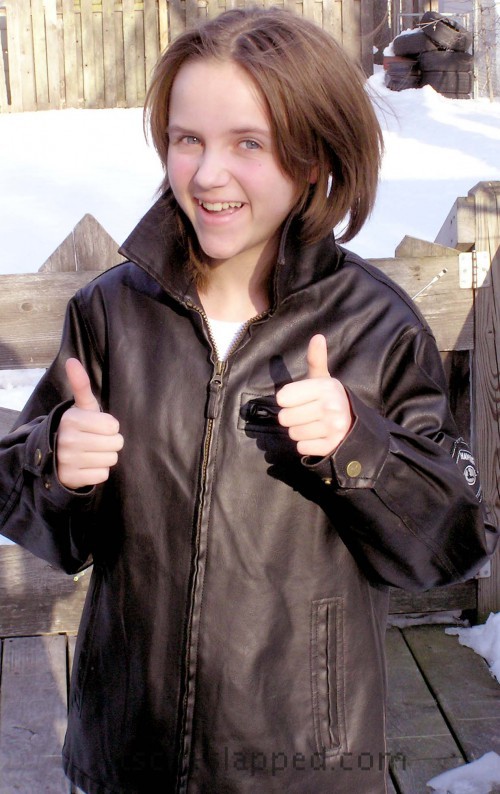