Hubby was reading to me from his newsfeeds about the latest news on David Carradine’s death, saying, “Rumours Carradine died attempting auto-erotic asphyxiation–”

I interrupt with a righteous, “Go old guy!”

Hubby, ignoring me (as most interrupted husbands are wont to do), continued to read, “– where victims achieve heightened sexual pleasure by restricting their air supply – are backed up by a quote a Bangkok police officer gave to British newspaper The Sun… urm.”

My response? “Well anyone who talks to The Sun can be trusted; it says so in the Bible.”

“Well, this one says, ‘Did David Carradine die as the result of a sex game? (with photo gallery)’ — but I don’t think it’s that sort of gallery.”

“That would be creepy-cool. Like, ‘Here’s Carradine getting blue…bluer… bluer yet…'”

This is when hubby has to make a choice: laugh at/with me, or leave the room. He laughs.

And I know it’s grim & rude to laugh at all of this; but remember, we aren’t laughing at Carradine’s death — we’re laughing at the coverage of it.

And it’s not like any of us didn’t already make the jokes about Carradine dying from Pai Mei’s Five-Point Palm Exploding Heart Technique. 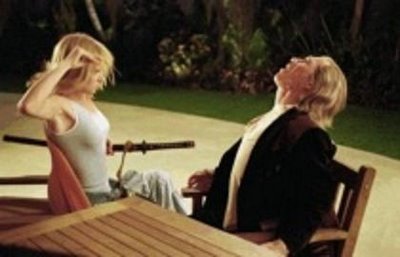