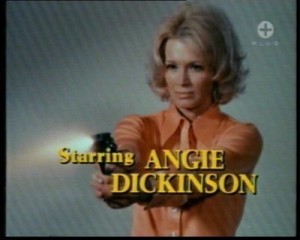 Most of us tend to think of Angie Dickinson when we think of police women — and it’s not just because she was Sgt. Suzanne “Pepper” Anderson on Police Woman in 1974.

Most of us tend to think of the 60’s & 70’s when those women’s libbers pushed and sued for the opportunity to be equals (including police officers) and Angie baby was in full mod swing then, so naturally we “see” her as the face (and bod) of the mod we’ve-come-a-long-way-baby policewoman. And the plethora of Police Woman dolls & toys — like this ridiculous “Sabotage Under The Sea” set with octopus — helped solidify this image for a lot of us. 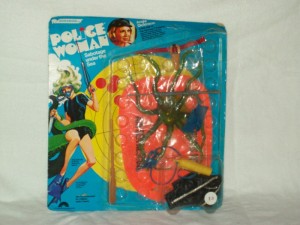 But in truth, there not only were female cops before then, but they were the result of what we’d now call “unlikely feminists” — and some bad male behavior. These battles would be more dangerous than tangling with an octopus.

You may have heard of Isabella Goodwin, the first US woman detective appointed in New York City on March 1, 1912 (it’s the sort of “fun historical fact” people like to blog about, say, on March 1st). But few take the time to give you some real information about her — or at least some cultural context. But you know I’m all about the context, right?

There’s little information available on the web about Isabella Goodwin (save for the fact one-liner), but there is a story & a setting alright.

The story begins in the mid 1800’s when female prisoners were housed with male prisoners and so male officers, their wives, widows of policemen (called “bedmakers,” these women were paid out of the policemen’s own pockets), or “the maid at the police station” performed searches on female prisoners. Such mingling of the sexes shocked the general public — mainly because of the high number of poor men and women who came to New York City often found themselves forced to find shelter at station houses (these people were called “casuals”). According to the NYPD, “in 1887, at various times, up to 42,000 of these homeless women spent at least one night in a station house.” However, things were about to change.

The Women’s Prison Association of New York and the American Female Christian Temperance Union petitioned the Board of Estimate and Apportionment for the appointment of police matrons, and for the creation of separate prison cells for men and women. If it sounds odd to you that Christian women of the 1800’s would be involved in a feminist push for equal career opportunities, you misunderstand. The push was not for careers for women, but for the protection of women who could be victimized by men. And you must remember that once upon a time, Christians saw their role in society as to help the less fortunate, including through social reform, as opposed to the current day philosophy of “”convert them or judge them & leave them to rot.”

Pressured by groups seeking social reforms, the New York State Legislature passed a law requiring that female doctors treat female patients in mental institutions & that every precinct station house has Police Matrons to tend to female arrestees. This legislation was passed in 1888. But the New York City Board of Police Commissioners does not make any Matron appointments until 1891 — after Governor David B. Hill signed a bill that mandated the hiring of Police Matrons and the establishment of separate cells for men and women under arrest. This was a direct result of a police officer being found guilty the attempted assault of a fifteen-year-old girl at a station house and sentenced to prison in 1890.

Months later, the first civil service test was held for the title of Police Matron — with applicants being required to have letters of recommendation from at least twenty women “of good standing.”

In an attempt at humor, I suppose, Jay Maeder sums up the “new” police matrons with “thus creating the jail-matron system that remained a sinecure for many a stern, stout Irishwoman well into the 20th century.”

Maeder’s stereotype isn’t the worst, or even the first. Gilder Lehrman Institute of American History notes:

Of course the matrons were not installed without criticism, which by the way ranged from the prediction that women would become totally incapacitated at the sighting of a mere rodent to criticism that men wouldn’t stand a chance because women would completely take over, dominating the station house and their fellow male employees.

Police Matrons worked long hours, receiving only one day off per month, and just one week’s vacation per year. In 1896, there is one Matron per shift (one day, one night) per station house. Their duties increase too. Matrons are now assigned to search subjects; process, escort and supervise inmates; and to care for lost children. As of 1899, they were paid $1,000 per year as of 1899, and they would not receive a pay increase until 1918.

It is in 1896 that police widow Isabella Goodwin (noted as having four children) is hired as a Police Matron and begins her police career, which will culminate in making First Grade Detective in March of 1912, and being appointed second in command of the first Women’s Police Precinct in April that same year.

Goodwin’s appointment to detective came about through the Police Chief bypassing Civil Service requirements that discriminated against women — presumably in large part due to pressure from the public and lots of press regarding her role in “bringing to justice of the taxicab bandits,” as evidenced in Goodwin’s interview in The New York Times, March 3, 1912 (below). 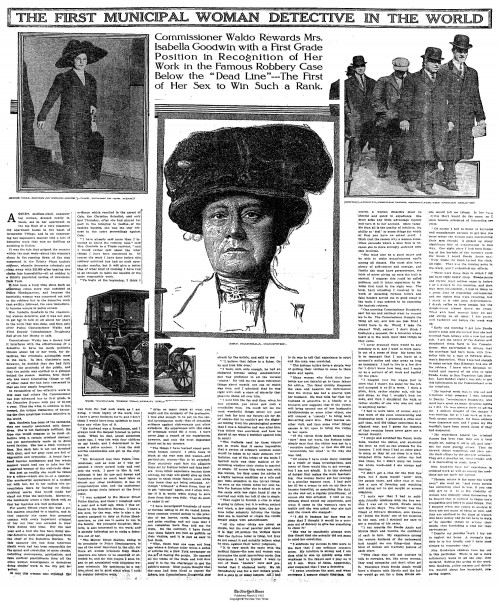 You really should read it; where else can you read a real news story which includes characters called Swede Annie and Eddie The Boob?

The old newspaper article also includes Goodwin’s story of a bust of a (male) fortune teller. The problem of $2 readings were apparently quite prevalent, for The New York Supplement details of Goodwin’s testimony & the judge’s affirmation of the conviction of fake fortune teller Maude Malcolm on Janurary 18, 1915 (beginning on page 919).

Goodwin, naturally, ends the interview with a, “Despite my peculiar work I try not to neglect my home. A woman’s first duty is to her family, and I have tried always to remember that.” To which the author is only too happy to pander, prove (with assertions from Isabella’s children & the author’s own eyes) & compliment.

But if this seems, well, less satisfactory than the loud “long way baby” route of the mod 60’s women’s lib ladies, consider the following…

Such public adoration may have been new to Goodwin and to female policewomen at the time, but Jay Maeder notes it wouldn’t stay that way:

Matrons did women pretty much exclusively until 1912, when one Isabella Goodwin, theretofore detailed to the wayward-lass wing of the Mercer St. station, was assigned to take a position as a domestic in a household full of suspected bank robbers. Goodwin, swiftly getting the goods on this bunch, then became New York’s first female detective first grade. Subsequently, more and more women began to get pulled into crime-busting duties, and a full-fledged Bureau of Policewomen was established in 1926.

The city’s lady cops, many of them nurses and lawyers and social workers and other such college-educated professionals, were celebrated public figures all through the 1930s and ’40s and ’50s, always good press copy as they went often quite dangerously undercover to lure sexual predators and smash abortion rings and whatnot.

Isabella Goodwin may never have had a doll or octopus made in her honor; but then again, she was probably never called “a bitch of a detective” in some sort of twisted praise. Angie Dickinson, on the other hand, only played a detective on TV and got the doll, the octopus, the pinup poses in men’s magazines, and had her then-husband, Burt Bacharach, “compliment” her by saying, “”If she’s down a notch from me in the public eye these days, well, she should be up a notch—she’s a bitch of an actress.”

So I ask you, who was the more respected woman? Who should we think of when we think of “police woman?”

And why hasn’t someone made a collectible Isabella Goodwin doll?

Maybe instead of an octopus accessory, it can have a fake fortune teller accessory kit.