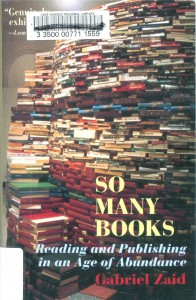 “So many books, so little time,” is the common lament of book readers and compulsive book buyers like myself who snap up paperbacks like this discarded library copy for 50 cents. That saying could have been the title of Gabriel Zaid’s book — but then, Zaid’s book covers more than just book readers, so he made the recognizable allusion & added a bit more to the title.

So Many Books: Reading and Publishing in an Age of Abundance by Gabriel Zaid (translated by Natasha Wimmer), covers the entire family of bookish folk: readers, buyers, collectors, writers, publishers, marketers, & retailers. The distinction of each may not seem like much to you; but having tried my hat at all of the above, I, and Zaid, can tell you there are some large differences (and when the book marketer & retailers, especially, are ignorant, they are very unsuccessful).

Zaid manages to pile on an enormous amount of facts (book publishing has been enriched by the very innovations that seem to threaten it), observations (many authors don’t write for their readers, but to pad their resumes) and philosophies (book are conversations; readers participate in the conversations and, in some cases, arrange the conversations) into a slim, 144 page, book.

But what’s truly amazing is that Wimmer’s translation manages to retain (or perhaps create? I’ve no way of assessing the original Spanish) a concise elegance that is fascinating & impressive.

Especially evident (as well as powerfully provocative) in chapter six, when the author lays out, step by step, how “learning to read is the integration of units of ever-more-complex meaning.” Ab-so-feakin’-lute-ly mind blowing to consider — while you are literally doing it!

Just how my copy of this book was deemed an unnecessary conversation by a library (the Lake Agassiz Regional Library, Moorhead, MN — not my Fargo Public Library!) seems more than ironic, but sad. Because I haven’t hugged a book to my chest like this in a long long time.

A true feast for bibliophiles craving both the intellectual & the literary, I could quote nearly endlessly from So Many Books — or at least 144 mass market pages worth. *wink* But out of respect for the author & translator, I’ll limit myself. These are my favorite passages — the juiciest ones that really make me think about myself — which come from the second chapter, titled An Embarrassment of Books:

Those who aspire to the status of cultured individuals visit bookstores with trepidation, overwhelmed by the immensity of all they have not read. They buy something that they’ve been told is good, make an unsuccessful attempt to read it, and when they have accumulated half a dozen unread books, feel so bad that they are afraid to buy more.

In contrast, the truly cultured are capable of owning thousands of unread books without losing their composure of their desire for more.

“Every private library is a reading plan,” Spanish philosopher Jose Gaos once wrote. So accurate is this observation that in order for it also to be ironic the reader must acknowledge a kind of general unspoken assumption: a book not read is a project uncompleted. Having unread books on display is like writing checks when you have no money in the bank — a way of deceiving your guests.

If that doesn’t make you smile — or at least grudgingly nod to yourself — then you book collectors will hate this next one:

A terrible solution is to keep books until you’ve accumulated a library of thousands of volumes, all the while telling yourself that you know you don’t have the time to read them but that you’ll be able to leave them to your children. This is an excuse that grows weaker and weaker as science makes even greater strides. Almost all books are obsolete from the moment they’re written, if not before. And marketing strategies engineer the planned obsolescence even of classic authors (with new and better critical editions) to eliminate the ruinous transmission of tastes from one generation to the next, which once upon a time.

The creation of an obsolete library for one’s children may only be justified in the way that the preservation of ruins is justified: in the name of archaeology.

Perhaps it at this point (page 16) that those who checked out So Many Books angrily stopped reading, returned the book to the library, and continued Zaid’s conversation in the most unflattering of ways, bad-mouthing the book into that useless space-taking-with-no-check-outs status that forced the librarian to discard it.

But me? I saw myself in those passages — and I loved it. Sure, it’s like those extra pounds I’ve got; not so pretty too look at for some, but baby, that’s all me! Before I can decide what — if anything — I should do about it, I have to first be aware of it. So Zaid held up a mirror and now I get to think about it… Why do I do that? (I buy it cheap, so that it’s at my fingertips — and there’s that osmosis thing.) Is he right? (I most vehemently do not agree all books become obsolete — some conversations ought never die & the past should be included in those conversations.) And then I get to converse with others about it. Awesome!

In case those passages really hurt your feeling (or before you rush off and buy yourself a copy of So Many Books), I’ll leave you with the following passage from the end of chapter one, To the Unrepentant Reader, which may put you & I & Zaid & all readers each in a better light:

The uniqueness of each reader, reflected in the particular nature of his personal library (his intellectual genome), flourishes in diversity. And the conversation continues, between the excesses of graphomania and the excesses of commerce, between the sprawl of chaos and the concentration of the market.