An amazing entry I found in The Journal of American History, Volume XI, January-February-March, No. 1, (copyright, 1917, The National Historical Society) which speaks as much to direct marketing responses as it does to attitudes about media. The National Historical Society, seeking to increase membership and circulation of the journal, had been “prosecuting a very extensive postal card campaign.” One of the recipients of the direct marketing response cards sent in a reply:

I respectfully decline to become a member of your society. I have absolutely no faith in American History. When the history of this great war will be written then you will have to take your information from the American newspapers, which have published more lies during the last 2 years than have been published since the beginning of the world. Yours truly,

The journal also notes that the correspondence was sent to the New York Tribune, where a representative of the newspaper tried interview Mr. Seitz by telephone. All Mr. Seitz would say in reply was, “You are all liars. I would not speak to you.” 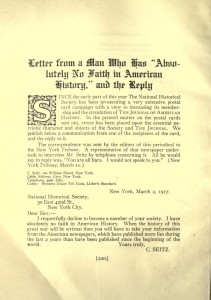