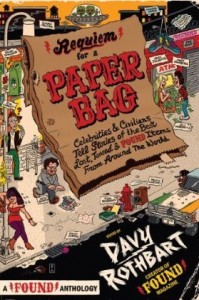 The resulting works are a feast for anyone who has found something and pondered the meaning or occasion of it — and yes, I mean anyone. Because you don’t have to be an ephemera collector to have found a found scrap of paper, a photograph stuck in a book, some trinket and have either wondered or even made up a story about it yourself. (And if you say you haven’t done it, I’m calling you a dirty rotten liar!)

Byron Case’s Trash Night reads so much like a memory of my own that even though I’ve never been lucky enough to make trash picking more than an annual event, I found myself nodding and laughing conspiratorially. 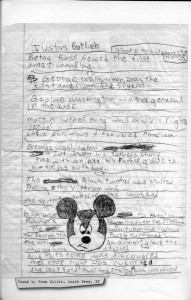 Sarah Vowell’s What Else I Know About U.S. History (a written response to a scrap of note paper found by Rona Miller of South Bend, Indiana) is so very Vowell in voice, that I can hear the emo as if she’s speaking the piece — and yes, that’s a fabulous thing.

And while Bich Minh Nguyen’s quote probably remains the most poetic, it’s Heidi Julavits’ Woodstove Girl which is the most haunting for me… It lingers… I wish I knew if it was real or a fiction piece.

Overall Requiem is a tasty dish, suitable for deouring in one leisurely buffet-style meal or for savoring in snatched snack-sized portions ala carte.