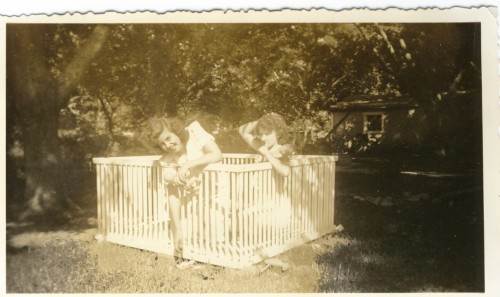 is really about. It could be innocent silliness; it could be some sort of kinky soft-core fantasy.

But when I look at it, I’m reminded of my sister.

When we were kids on family vacation one year, my sister had one of her dramatic fits of anger just as we were all walking from the hotel room to the car. As luck would have it, there outside of the rooms ins some sort of outdoor covered area, along with the ice and vending machines, there was a baby’s crib, left by housekeeping or something. Since my sister was acting like a baby, my dad picked up my sister (who was then roughly 10 years old) and placed her in the crib.

My sister should have been able to get out, but being so consumed and fraught with anger, she couldn’t mobilize such an effort. This made her even more furious.

Her face was so red, her fists were clenched in rage beating on the top rail of the crib’s walls — her screams demanding her release could barely be understood above her own howls of fury.

And we, my parents and myself, just stood there, watching. And laughing. At a safe enough distance.

The laughing only enraged my sister more, keeping her helpless and trapped in the baby’s crib.

Eventually she was spent. With nothing left to give, her emotional skies cleared, and the whole thing passed. Too exhausted from it all, she still couldn’t get herself out so my dad picked her up for the second time that morning and swung her back down to the ground.

And we went on our way to get breakfast.