I’ll admit I was drawn to this vintage paperback because of the cover. Spotting the sad little sweater girl, I thought to myself, “Why so glum, chum? What can happen to a pinup wearing a pink sweater? …Aside from the cruel misogyny of the world, that is.” But Police at the Funeral 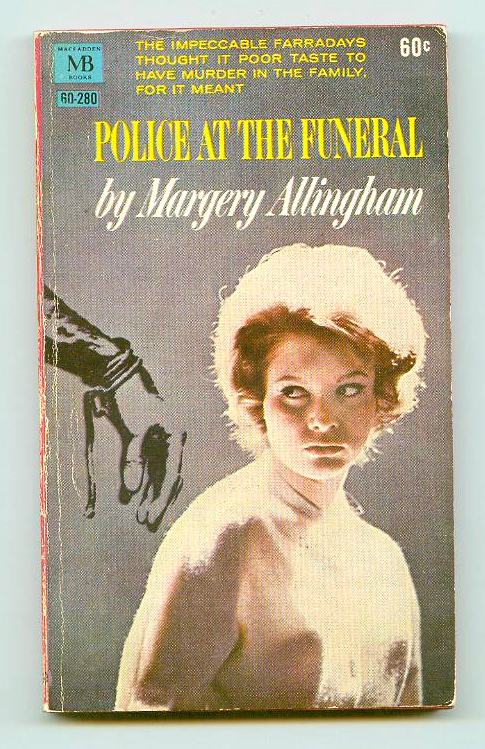 Oh, and when I flipped through the book, I found this little goofy thing: 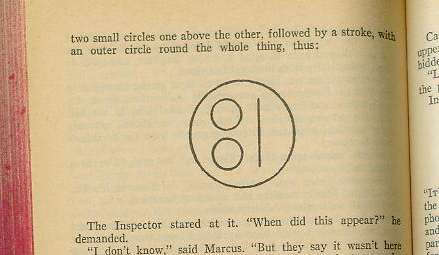 Who can resist a murder mystery with a sideways smiley face, of sorts, supposedly as a clue?

Since I was lured in by the pulp-esque cover, I had no clue as to the work or the author, Margery Allingham; as I typically do when I have no clue about the book, I scanned the covers and the copyright page for more clues. My copy is the second printing (April 1967) of the Macfadden publication (MB book #60-280). However, the work was originally published and copyrighted in 1931 and 1932, by Doubleday; which, I later discovered, was a later US publication of the original work put out in the UK in 1931 by Heinemann. So basically, what I have is a later reissue with a more “mod” retro pulp packaging, designed to lure new readers to an old (by now cheap) story. A tradition long upheld in publishing — one that obviously still works, as I’m a modern example.

Aside from being of interest to book collectors, fanciers of the book publishing industry, and the odd duck who cares about my behaviors, the dates of the work are important in terms of the review. For the book has that “formal” tone one oft equates with “old mysteries” — both from the British author and the time period standpoint; i.e. the book reads much like those of Agatha Christie, who was Allingham’s contemporary in what is now called the Golden Age of detective fiction.

The basic non-spoiler story is this: Albert Campion is called in by a friend to investigate the disappearance of a man. The man is found — dead. And so Campion winds up investigating by staying at the victim’s family home, the very “Gothic” Socrates Close, in Cambridge. Socrates Close, and the Farraday family it houses, are relics of Victorian times and mores. (The book’s title, Police At The Funeral, is a reference to the deep embarrassment felt by the scandal of murder; similar social rules regarding gender and race are also present.) More mystery, mayhem, and murder ensues until Campion solves the case. Here’s the back of the book for a full cast of characters: 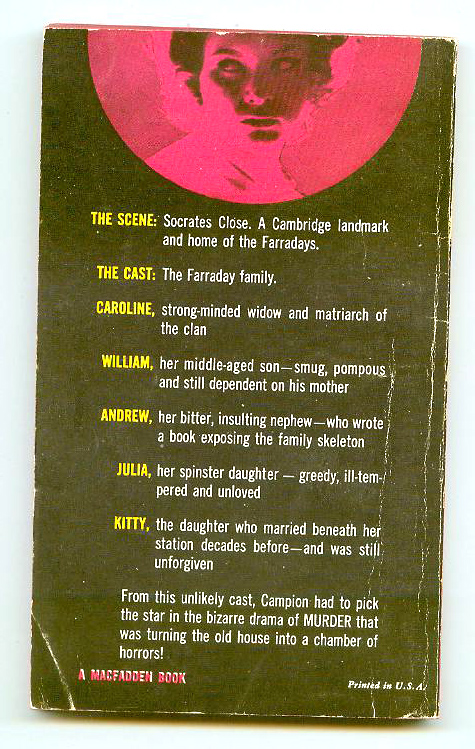 Usually, I have the “who” in whodunit figured out quickly; one of the many reasons I’m not a huge reader of mysteries. But I’ll admit that I didn’t see this one a-comin’. Perhaps this is because, as Inspector Stanislaus said of the culprit and the culprit’s deeds on page 203, the book has “the right mixture of cleverness and lunacy — an elaborate, ingenious scheme.” However…

While not deducing the murderer (early on or at all) is one of the delights of reading a murder mystery novel, I found myself not caring so much.

Firstly, I found myself not caring so much because, formal tone and style of the work or not, I found the characters cold — cold enough that I didn’t particularly like any of them. So even though my morality demands that the criminal be caught, I didn’t so much worry who it was, why they did it, or what the effects of discovery might mean. And those, for me, are required parts for enjoyment of reading such novels. For even if I do figure it all out on page three, I still (hope to) enjoy the character driven consequences of discovery. In this book, this was absent — save for the unique personal gift Campion receives for a job well done: an antique (even then!) gaff taxidermy mermaid skeleton.

Secondly, I found the most interesting and engaging mystery to be that surrounding Albert Campion himself. There are subtle references, most often from the wealthy Great Aunt Caroline Farraday, that Campion’s real name and identity will be kept — even though there are a few clues here and there… Right up to the end of the book, where Great Aunt Caroline mentions that his grandmother is “dear Emily.” This was the mystery I was more concerned with! And it turns out, fans of the author and her works are too. Now that I’ve read the book, I did a little detective work of my own (research) and learned that not only was Police At The Funeral Allingham’s fourth novel with Albert Campion, but the character would eventually go on to feature in a total of 17 novels and over 20 short stories — and at no point is Campion’s true identity given! Now there’s the mystery worth solving! Perhaps 16 more novels and all those short stories later, I could piece a thing or two together…

Thanks to Allingham’s decent writing, I might consider such an endeavor — if only time were infinite. For I have sagging bookshelves awaiting me…

Speaking of sagging bookshelves, I’m willing to divest myself of this one now.  You can buy it from me using the button below for just $6, including US shipping. Or you can try eBay

Since I’ve now finished the book, I’ve allowed myself the opportunity to look up the author, and found that she was cheekily self-aware enough to say that she had “a figure designed for great endurance at a desk.” I sincerely take that to heart. For more on the author, see The Margery Allingham Society.