From Greta Christina‘s Fashion is a Feminist Issue:

Fashion is one of the very few forms of expression in which women have more freedom than men.

And I don’t think it’s an accident that it’s typically seen as shallow, trivial, and vain.

It is the height of irony that women are valued for our looks, encouraged to make ourselves beautiful and ornamental… and are then derided as shallow and vain for doing so. And it’s a subtle but definite form of sexism to take one of the few forms of expression where women have more freedom, and treat it as a form of expression that’s inherently superficial and trivial. Like it or not, fashion and style are primarily a women’s art form. And I think it gets treated as trivial because women get treated as trivial.

What’s more, there’s an interestingly sexist assumption that often gets made about female fashion — namely, that it’s primarily intended to get male attention and male approval.

In my experience, this is very much not the case. Female fashion is often as much about women’s communication with one another as it is about our communication with men. More so, in many ways. When women who clearly care about fashion and style pass each other on the street, there’s often a sort of silent conversation: a moment of acknowledgement, a nod of recognition. (And the conversation isn’t always silent — I’ve been known to go up to totally strange women in bars or on the street and compliment them on their outfits. As other women have with me.) At parties, at conventions, at social and professional gatherings of all sorts, if there’s a decent number of women, there are almost certainly women checking out each other’s styles: appreciatively, competitively, enviously, companionably, subtly jockeying for status, in a spirit of co-operation and camaraderie, and in just about every other angle on human connection you can imagine. And it has little or nothing to do with men.

Now, granted: I’m a dyke, a lesbian-identified bisexual, and as such I have a different angle on this issue than many. I do have some interest in whether men find me attractive, but for the most part it’s only a passing interest, and my sexual self-esteem is only tangentially related to men’s opinions of me. (And my attention to other women is often driven by, shall we say, something other than our silent conversations about style.) But I’ve talked with other non-dyke women who are interested in fashion and style, and they say much the same thing: They dress for other women as much as they dress for men — and in many ways, more so. In particular, they dress for other stylish women. And this assumption that women’s fashion is aimed solely or primarily at men… well, there’s more than a little sexism behind it. 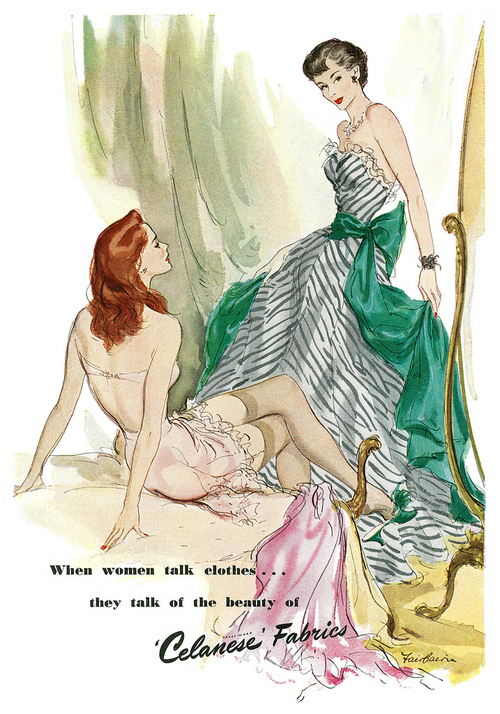