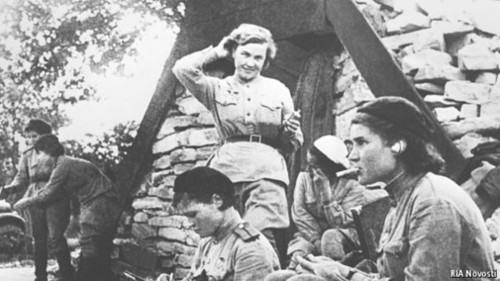 WHEN their hair was chopped off—as it had to be when they joined one of the Soviet Union’s three women-only air-force regiments—some of the women looked just like boys. Add in the bulky flight jackets, the too-big trousers and the size 42 boots, all made for men, and they could have passed for male pilots, just about. Not Nadia Popova. Somehow she managed, with a cinched waist here and a few darts there, to look like a Hollywood star. Between sorties she would fluff her hair, pressed flat by her leather flying helmet, in her tortoiseshell mirror (as at the centre of the picture above). Before each flight she would pin to her uniform a beetle brooch, which also served as a lucky charm. Beside her wooden cot in whatever shed they were sleeping in—once a cowshed—she kept a white silk blouse and a long blue silk scarf, in case she had to make a really feminine impression.

This was also the young woman—she was 19 or 20 then—who could turn her aircraft over and dive full-throttle through raking German searchlights, swerving and dancing, acting as a decoy for a second plane that would glide in silently behind her to drop its payload of bombs. That done, the second plane would act as decoy while she glided in to drop bombs herself. She made 852 such sorties in the second world war as a pilot in the 588th Night Bomber Regiment, later named the 46th Guards in honour of its courage.