Some people think that the only premiums that came in boxes were in cereal boxes for kids. Sure, there were those coupon books and other early loyalty programs designed to bring people back to certain department stores, gas stations, grocery stores, and other shops. But when it comes to actual free things inside boxes, most people think of the toys and surprises inside cereal boxes designed to make the kiddies beg mom and dad for the stuff. But there were other premiums, including those in products for adults. And primarily these offers were specifically aimed at those adults in charge of most household purchasing: the American housewife.

Perhaps nowhere was this push for premiums more used than in the area of laundry detergents and soaps.

The competition was fierce in this market on all sorts of points, just as it is today, on everything from cleaning power and amount of suds (any real expert will tell you cleaning has more to do with physical scrubbing and agitation than chemicals and soap suds) to product versatility, and, because some cleaning still was done by actual human hands (something I still highly recommend), how gentle the product was on the little lady’s hands.

Those of us who are at least 40 years old may vividly recall these premiums and brands — not coincidentally because of the soap operas, which were, at their very essence, dramas created for housewives to watch and therefore pushed soaps and cleaning products; hence the name soap operas. 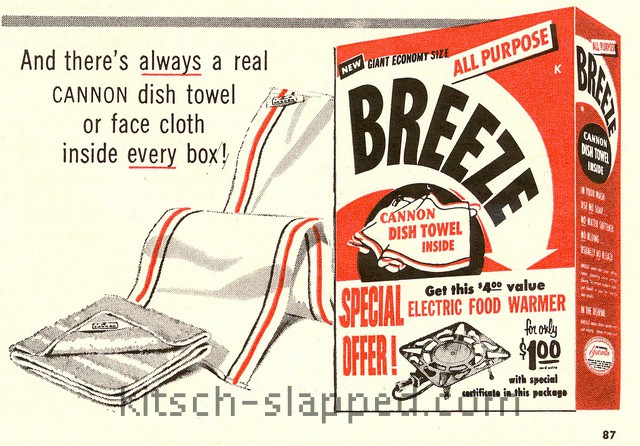 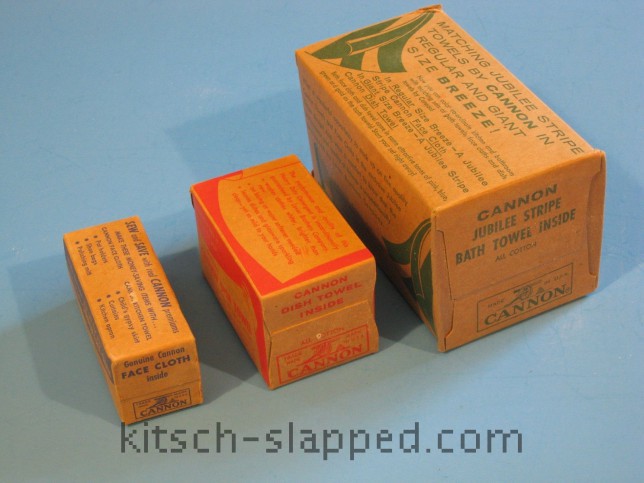 (This stuff is apparently so nostalgic, that someone just paid $39.99 for an old unopened box of Breeze with the towel still inside.)

My mom watched the CBS soap operas, as did her mother before her. As a result, our family was loyal to the family of Proctor & Gamble products. Proctor & Gamble put towels into their boxes of Bonus laundry detergent — as this fabulous musical commercial from 1960s illustrates. Note the gender split — and how the little woman’s knowledge (and sexual necktie manipulation) wins out.

Later, P&G would graduate from towels to putting glasses and china dishes with a wheat pattern

(some even with gold trim) in boxes of Duz, the “does everything” laundry detergent. Incidentally, those wheat dishes were once clogging thrift shop shelves, but now, nostalgia coupled with the fascination with Mid-Century Modern, these dishes are making a comeback.

However, when it comes laundry detergent premiums, I don’t think many things are so firmly entrenched in our collective minds as Dolly Parton pitching boxes of soap with towels in them in the 1970s. While there is some debate as to whether the brand of detergent was Breeze or Duz (it was, in fact, Breeze; and we pray again to the YouTube Gods that someone can upload such a commercial!), almost everyone recalls the ads. Especially the kitsch factor.

Dolly herself admits how corny the ads were:

I remember seeing you on “The Porter Wagoner Show,” pulling out giant towels from boxes of Breeze detergent.

It was actually a bath towel — we used to have to do our own commercials on those shows, and they were so corny. But I still have some of those towels that I’ve kept through the years. Those were the days — “And you can only get them in boxes of Breeze!” And honestly, with that towel inside, there probably wasn’t more than half a box of Breeze. But people didn’t care because they were getting something free.

Corny or not, to this day, when I see a small hand towel covered in gold roses, “zeenyas!”, or other yellow flowers I instantly think of Dolly Parton. Its not just Dolly’s love of yellow roses, but those 70s yellow florals that stick in my mind. And that’s not all. Whenever I am at someone’s house and they have a similar looking towel out for use, I am convinced my hands smell like vintage detergent too. Come to think of it, that may be why I don’t like those wheat patterned dishes either.