When discussing political collectibles, there are the strange, and then there are the tacky. And in my opinion, little is tackier than Nixon.

You know, I say this with affection, as I am collector of Nixon items and oddities. 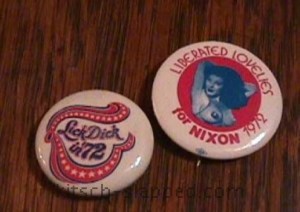 It began with spying a “Liberated Lovelies for Nixon 1972” button. And it might have stopped there — if the anti-button for 72 hadn’t been right there as well… But who could pass that up?!

Nixon naughtiness is out there, and I must have it.

Since those first purchases, I’ve kept my eyes open for more Nixon items. 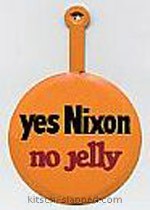 “Yes Nixon, No Jelly,” a tab from a candy company to promote their ‘Peanut Butter No Jelly’ candy bar during the campaign. It is interesting to note that the candy bar, like the President, is no longer… I imagine more folks miss the candy bar.

Yes, there was a matching McGovern one too, but I like mocking Nixon — & I have quite the Anti-Nixon collection to prove it! *neener neener*

There are a few reasons why Nixon is so easy to mock. One’s the man himself. The other is that Watergate changed the way we looked at our politicians and leaders. With this new awareness, or cynicism, Nixon spawned more ‘stuff’ than you can imagine.

Some of my personal favorites are the National Watergate Test booklet and the Watergate Coloring Book, where you can “color the facts” yourself. 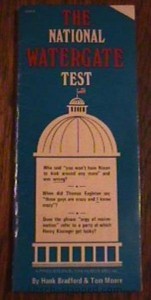 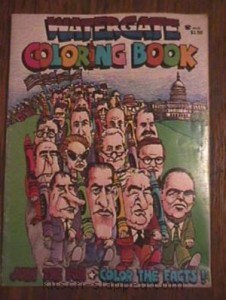 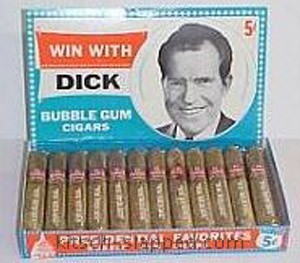 Speaking of Sticky-Tricky-Dicky… How about these “Win With Dick” Bubble Gum Cigars?!

When looking for Nixon collectibles, I recommend this book by Eldon Almquist, who once ran the Nixon Collector’s Organization: The Political Collectibles of Richard M. Nixon.