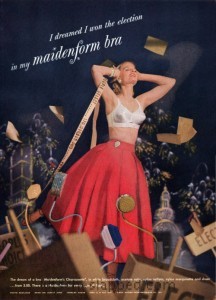 Whether or not “you’re with her,” you have to recognize the historical step of Hillary Clinton becoming the first female presumptive presidential nominee for a major U.S. political party. However, she was not the first woman to run for president. Rachel Maddow covered the titillating news (and nervous giggling that ensued) when other women ran for president of the United States of America. Maddow’s coverage includes vintage news clips reporting on Maine Senetor Margaret Chase Smith’s run for the Republican presidential nomination in 1964 and when Shirley Chisholm, the first African-American congresswoman from New York State, ran for Democratic presidential nomination in 1972.

Thankfully, there were no advertisements, real or parody, featuring any of the candidates in their underthings. A sign of minimal respect, perhaps. But then, the Maidenform “I Dreamed I won the election” ad from 1958 must have brought many a chuckle & guffaw. (More on the classic vintage lingerie ad series here & here.)