A vintage pair of Unitex Sanitary Panties — brand new, unused, in the original box with all the instructions, etc. 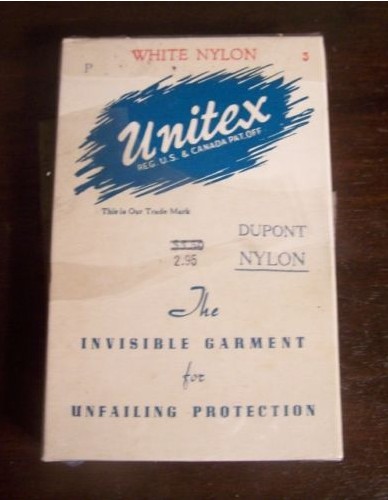 The panties are made of sheer nylon with a rubber or vinyl-like pocket (likely the same material used to put over baby diapers) to insert your old fashioned sanitary napkin in. 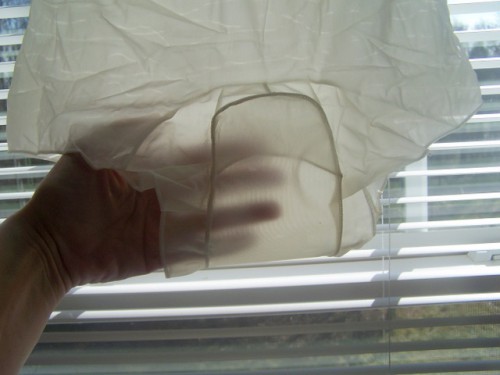 The original tag says the panties must be worn “next to the body… Never over any other garment.” A-doi! 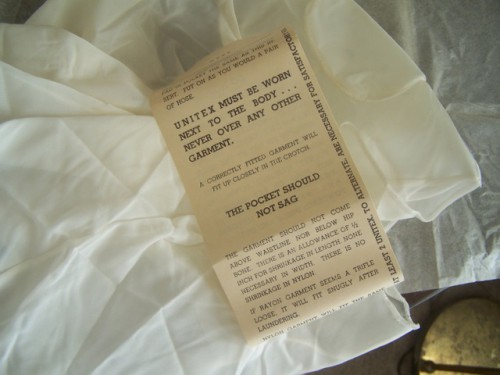 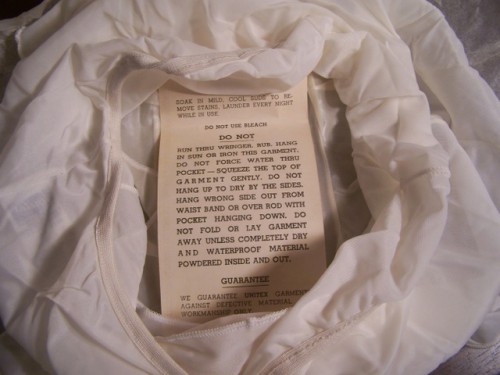 , “I bet there aren’t many of these left in existence.”

In January of 1988, Jimmy “The Greek” Snyder was fired by CBS for racism after he made the following infamous comment to an NBC affiliate, station WRC-TV:

The black is a better athlete to begin with because he’s been bred to be that way — because of his high thighs and big thighs that goes up into his back, and they can jump higher and run faster because of their bigger thighs. This goes back all the way to the Civil War when during the slave trading, the owner — the slave owner would breed his big black to his big woman so that he could have a big black kid.

[I remember, as a kid at the time, thinking it was odd no one was offended by the nickname, “The Greek” — especially as it, and even “Jimmy,” likely came from the general (lazy) inability to pronounce the man’s real name, Dimetrios Georgios Synodinos.]

I won’t deny there were more tactful ways to communicate realities of racism (it was, in fact, a breeding program; let’s not deny the horrors), but it seems “Jimmy” was also onto something… Something biological. Something which sounds even less, well, probable.

In a study published last year in the International Journal of Design and Nature and Ecodynamics, Professor Andre Bejan of Duke University, Professor Edward Jones of Howard University in Washington, and Duke graduate Jordan Charles, found that there’s a biological physical trait at the center of athletic performance:

The navel is the centre of gravity of the body, and given two runners or swimmers of the same height, one African origin and one European origin, “what matters is not total height but the position of the belly-button, or centre of gravity,” says study lead author Professor Andre Bejan of Duke University.

“It so happens that in the architecture of the human body of West African-origin runners, the centre of gravity is significantly higher than in runners of European origin,” which puts them at an advantage in sprints on the track, he says.

The researchers charted and analysed nearly 100 years of records in men’s and women’s sprinting and 100-metres freestyle swimming for the study.

Individuals of West African-origin have longer legs than European-origin athletes, which means their belly-buttons are three centimetres higher, says Bejan.

That means the West-African athletes have a ‘hidden height’ that is 3% greater than Europeans, which gives them a significant speed advantage on the track.

“Locomotion is essentially a continual process of falling forward, and mass that falls from a higher altitude, falls faster,” says Bejan.

The science, physics, of belly-buttons gets weirder…

In the pool, meanwhile, Europeans have the advantage because they have longer torsos, making their belly-buttons lower in the general scheme of body architecture.

“Swimming is the art of surfing the wave created by the swimmer,” says Bejan.

“The swimmer who makes the bigger wave is the faster swimmer, and a longer torso makes a bigger wave. Europeans have a 3% longer torso than West Africans, which gives them a 1.5% speed advantage in the pool,” he says.

Asians have the same long torsos as Europeans, giving them the same potential to be record-breakers in the pool.

But they often lose out to Europeans because Asians are typically shorter, says Bejan.

Many scientists have avoided studying why Africans make better sprinters and Europeans better swimmers because of what the study calls the “obvious” race angle.

While the study “focused on the athletes’ geographic origins and biology, not race, which the authors of the study call a ‘social construct,'” it seems Mr. Georgios wasn’t too far off the mark…

I should stop this now before I step into even deeper stereotypical waters.

But I can’t help but think that our hyper-sensitivity, our unwillingness to deal directly with racism in this country, leads not only to problems with firing the admittedly-tactless messenger (be it Jimmy The Greek or some angry comments to this blogger), but in any sort of rational discussion…

In even hearing this sort of news…

I mean this study was out a year ago, and if it weren’t for my visit to Chris Cruz’s blog, I never would have heard of this research.

Also in the December issue of Psychology Today, Mina Shaghaghi reports on the findings of a series of studies by Richard Russell of Gettysburg College which explains the “allure of dramatic eye makeup and va-va-voom red lips on women has biological roots.”

It seems that what glamor girls do (whether they know it or not) is increase the contrast of the eyes and lips against the rest of the face — and such contrasts communicate femininity and attractiveness.

These studies indicate that it’s not so much the colors of your cosmetics, but that they darken the eyes and lips, making the rest of your complexion pale even more by comparison.

For more on this, visit Richard Russell’s Research page (scroll to the bottom for the Artificial Enhancement of Facial Signals studies).

Live blogging 20/20’s show The Science of Seduction: Why Him, Why Her?

When I first heard about the show, which is sort of based upon biological anthropologist Helen Fisher’s book Why Him, Why Her? — a book which claims there are personality types — I thought, “Well here’s another form of astrology.” I won’t say I hate astrology; those daily things suck, but the general overviews are slightly informative. Then there’s Chinese astrology etc. So maybe these are some basic bits of information on personality, but what about personal experiences? I know far more women who are happily married to ‘men just like their dads’ then perfect astrology matches.

But after hearing of the research and science behind, I’m more intrigued…

I don’t think we are any more trapped by biology than we are the stars or family patterns. However, I think I want to check out this book and see if it is perhaps yet another layer — another framework among several. And when you lay each over the other, you end up with a complicated, yet far more accurate image of how we seek , who we find, and what we end up with.

Part of the television program also included being ‘damaged’ or insecure regarding relationships based on former experiences, opting to show professional matchmakers as a means to find love, or at least meet people. It wasn’t very helpful as far as remedies to your fragile belief in dating & relationships, but there was something very informative in this segment. The matchmaker said, “Many people say they want love, but aren’t ready for love.” I found that to be the most important part of that segment. It was too bad that 20/20 edited it to look as if the matchmaker was defensively using this as an excuse for not having perfect performance.

On the flip side, 20/20 erred in the next segment their aired. It was on arranged marriages, and rather than focusing on the wisdom provided by the expert who mentioned that a huge key in the success of Indian arranged marriages was the ceremony which clearly put an emphasis on the investment of both the bride & groom’s families and their communities to make such marriages work; 20/20 ended the segment with the small percentage rate of divorces in India, leaving out the plethora of cultural differences which can also account for such disparity. Leaving that as the last word, rather than the insight into total family & community commitment to the couple’s success, left me lingering on more negative, less helpful facts.

Second to that, were the damning statements about love as depicted in song and film (something covered in that study I’m participating in).

Ah, so at the end, the expert, Helen Fisher, does agree with me that love & romance are far more complicated than it sounded at the beginning. *wink*

I’m off to take the questionnaire to see “what I am” — and I think I’ll make the husband do it to. Then I’ll have more to say.