While searching for those 70s sex feet, I stumbled into these kitschy vintage bare feet salt and pepper shakers.

I guess not all of them are vintage; but they nearly always have bright red toenail polish. 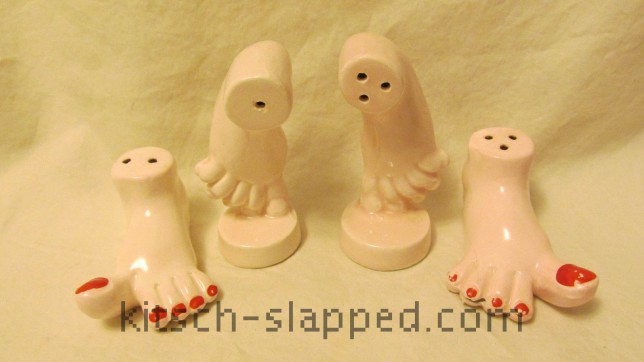 Why anyone wants to put bare feet on the table, let alone shake their contents onto your food, is anyone’s guess. Like momma always said, there’s no accounting for taste. 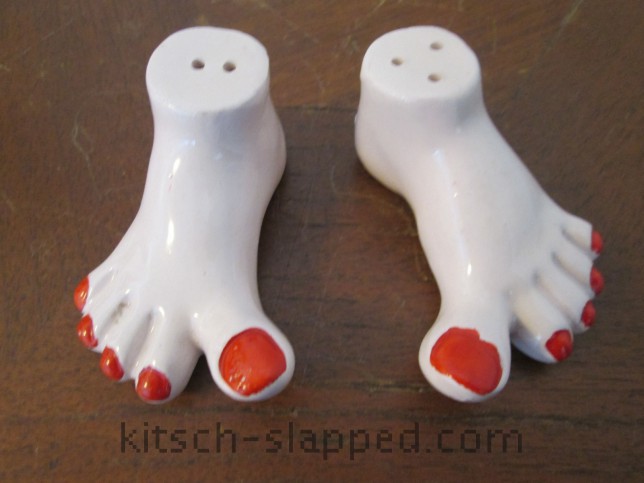 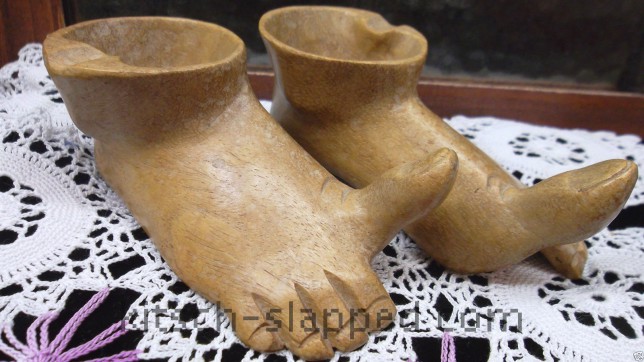 One seller, of this pair of mismatched bare feet ashtrays, states, “Designed for use as a pipe holder and ashtray.” So perhaps that big toe helps hold the pipe. …But that doesn’t explain the s & p shakers, does it. If anyone can shed some light on this whole thing — explain just why this is a thing — please, please do! 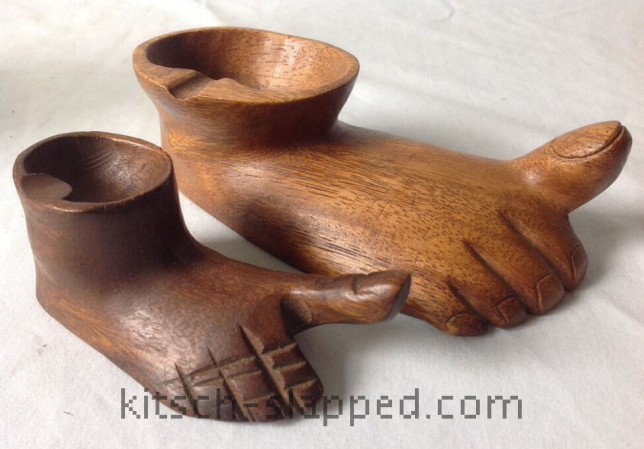 In the 70s, footprints were big things. Sometimes they were quite literally big things; such as the giant, and very fuzzy, footprint rugs my sister and I had in our room. (See other things that may have been in your bedroom back then.)

Other times, the feet were smaller.

If you were cognizant in the 1970s, you likely recall all the pairs of mating feet. Because many adults labored under the incorrect belief that such pairs of feet were somehow not understood by children (umm, this is exactly what many children saw when they opened the door to your bedroom), these sex feet were everywhere. 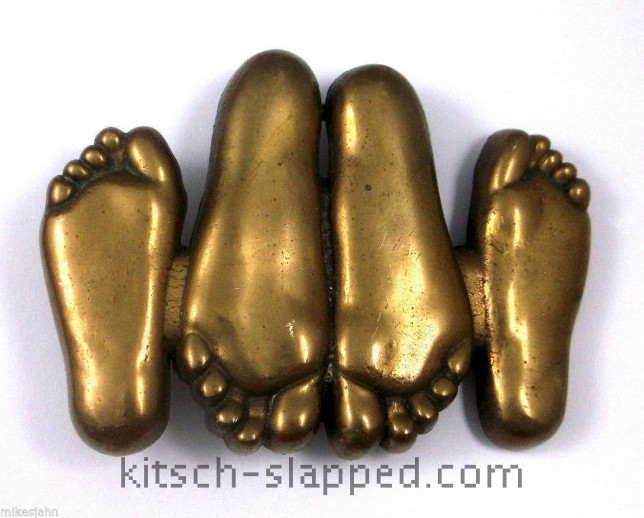 And — surprise! — there’s sexism involved in such a sexual revolution.

are shown as heterosexual couplings in the missionary position; which is neither all that revolutionary or, for many, very pleasurable. We are able to see that it’s a man and a woman doing it missionary style as there are two sets of feet — but not of the same size. This is typically deciphered to mean that the larger feet belong to a man. After all, hetero-normative rules state men are to be larger than their lady partners. And his feet must be much bigger because, you know, big feet mean big penis. That’s the myth, anyway. And he must be on top because he is The Top. 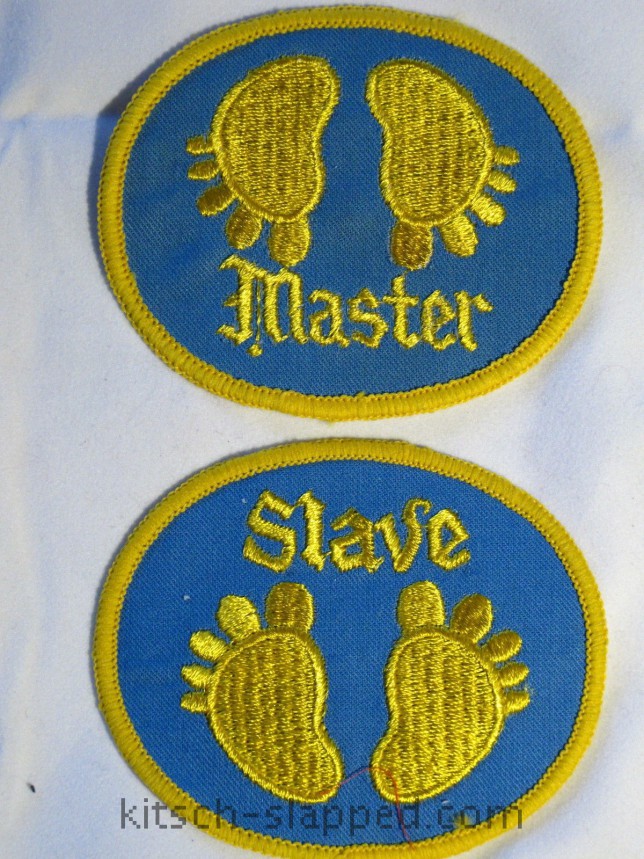 Besides, who would change their minds (cross their legs and feet) and say “no” other than a woman? 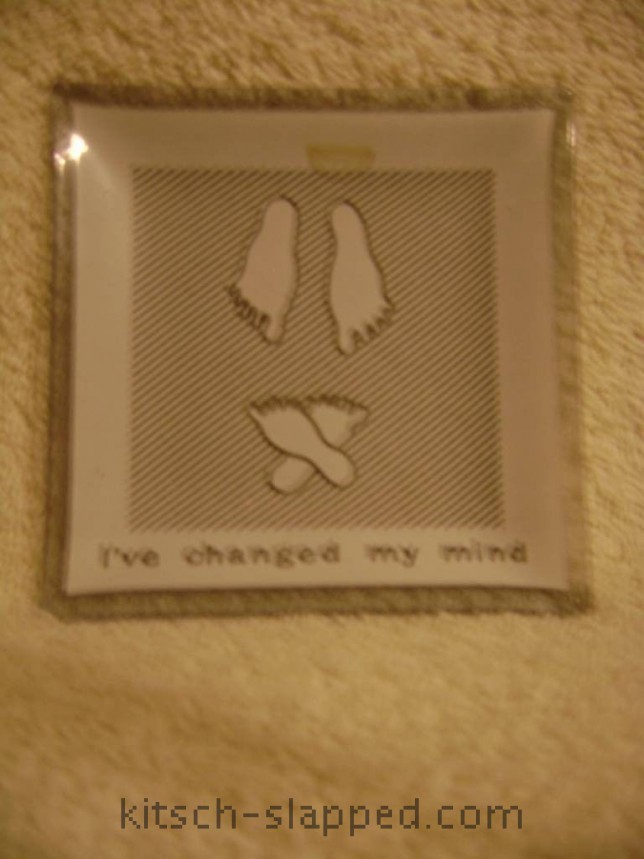 But if you think this is all about the Free Love movement, sex feet were often presented or captioned with odd supposedly humorous notions revealing traditional values. Like this ashtray and its “Man does this mean we are engaged” speech bubble. 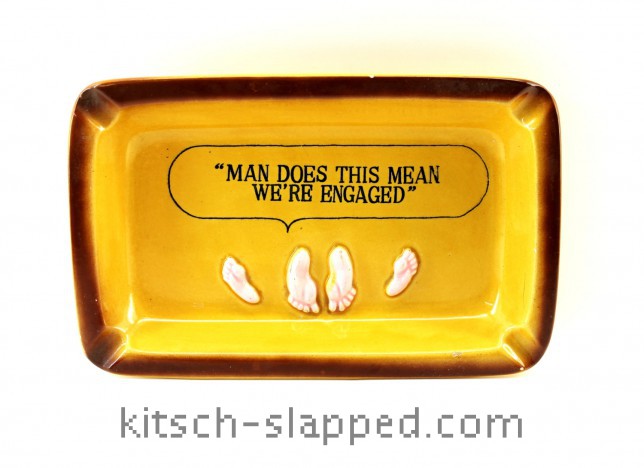