Before there was today’s code for handkerchiefs, there were other fashion accessories used in courtship for communicating and flirting. There was the fan, of course, and, according to this article found in the Bismarck Tribune (March 15, 1879), gloves were used too.

The English girls have improved upon the language opf the fan and the handkerchief by devising a very copious vocabulary of the gloves, which for the benefit of American women we beg to “pirate”from an English contemporary. It runs thus: 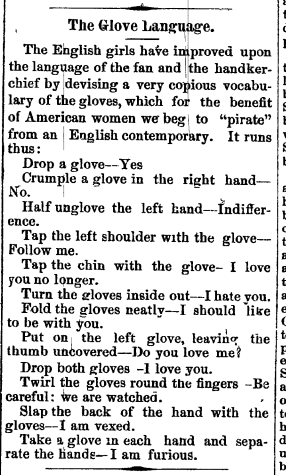 This also reminds me of the supposed code for rubber, gel or silicone bracelets; just because it was reported, it doesn’t make it true.