In the 1920’s and 30’s, a boy dreamed of owning a horse, and of being a writer. Encouraged by his high school teacher, he wrote every night after dinner for an hour. He worked on his book through high school and continued as an undergrad at college.

In 1940, his book was finished, and Random House was going to publish it. The editor told the author, “Don’t figure on making any money writing children’s books.” The author disagreed, saying “If you can write a book that will interest children you can make a living.”

His first book was an instant hit when it appeared in 1941, and it developed it into a series — even a fan club. This series has sold over a hundred million copies in the last 60 years, and even inspired several feature-length films in recent years. The author had proved his point well.

The author was Walter Farley, and that first book was The Black Stallion.

The Black Stallion was so successful, that Farley had enough financial security to quit school and travel around the world. Though flooded with an avalanche of requests for sequels to his book, being drafted into the service during WWII to work as a government reporter during the war, prevented the release of the next book. A few years later, he met & married his wife, and he settled down. Because of the success with the first book, Farley wanted to write full time, and told his editor of his desire. This was the response from Louise Bonino, Farley’s editor, in a letter dated February 8, 1945:

“Your desire to devote yourself exclusively to writing after the war is perfectly natural, but I know of only one writer of teenage books who has managed to come pretty close to what you’re after. Even he admitted to me once that if he were to depend on book royalties alone, he wouldn’t be able to support his family. The last thing in the world I’d want to do would be to crush an extremely worthwhile ambition, but I would feel remiss both as a friend and as a publisher if I didn’t caution you to do some careful arithmetic before you decide to burn your bridges.”

In October of 1945 the wartime restrictions on publishing were lifted and Farley released his second book, The Black Stallion Returns, to immediate success. Soon the royalties were enough that the Farleys had no concerns about making ends meet.

I have no doubts about the editors’ sincerity in their cautious statements — I’ve made similar statements myself to authors from time to time. (Heck, I’ve even pondered if we’ll make a living being publishers.) But Farley is an inspiration. 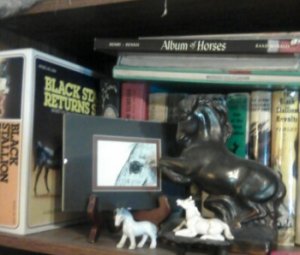 When speaking in classrooms, libraries & at book fairs, Farley often shared his philosophy that you can make a living doing what you love best, or doing something related to it. He took his two loves, writing & horses, and put them together with hard work, making his dreams a reality. Along the way, he inspired countless readers, certainly some horse owners, many authors, more than a few filmmakers — and he inspired this publisher.

At the time of his death, Farley had received over 500,000 letters from fans, and his books remain popular generations later. It’s a wonderful legacy for an author. But Waler Farley the man has an even larger legacy: one of imagination and inspiration for all.

“I don’t think kids are encouraged to use their imaginations,” said Farley. “Imagination can help you reach into the heavens to grasp an idea, bring it down to earth, and make it work.”

Now those are words to live by, to write by, and yes, to publish by.

NOTE: This is a rerun or “classic” post I am resurrecting from an old dead site ;)

Because (nearly) every little girl loves horses (I sure did!), it shouldn’t be surprising that a shelf full of horse figurines would be among the decor shown in smut to designate the juvenile status of the woman. However, in this case, one would be pretty hard-pressed to suspend their disbelief that this “babe” disrobing to her stockings and suspenders is an innocent teen; she looks a lot more like a mom in her daughter’s room — perhaps there to dust the Breyer horses, nodding dogs, and 45 RPM records. For more thoughts on this: When Lollipops Make Us Suckers (NWS). 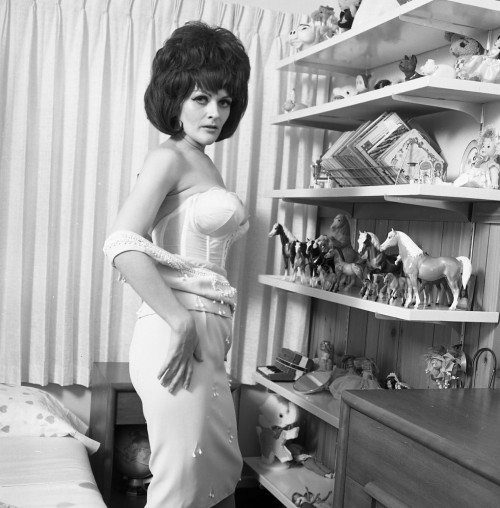 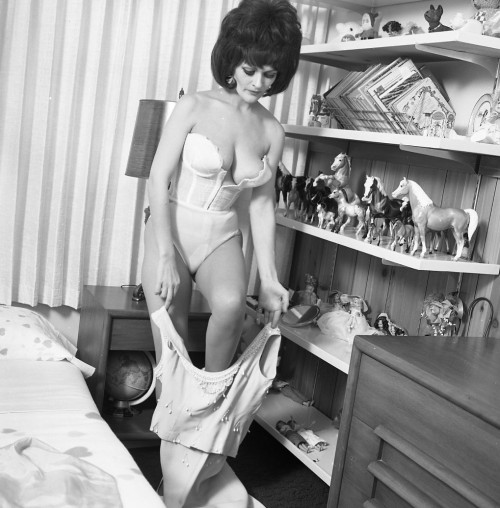 Two new foals were born this year on Assateague Island — just like those famous horse stories by Marguerite Henry, such as Misty of Chincoteague. 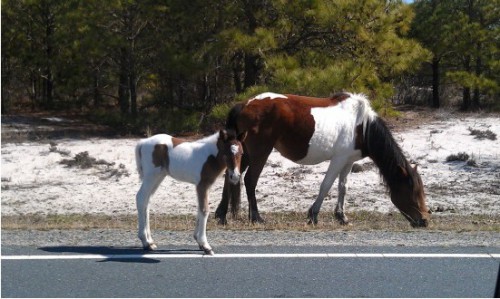 Assateague Island is a Barrier Island which lies to the east of Chincoteague Island. Here’s a photo gallery of the 86th annual pony swim across Assateague Channel, held in July of last year.

Ladies, if you love the original tramp-stamp girlie toys, My Little Ponies, so much that you dreamed of becoming one, here’s the solution: My Little Pony Unicorn Dresses. 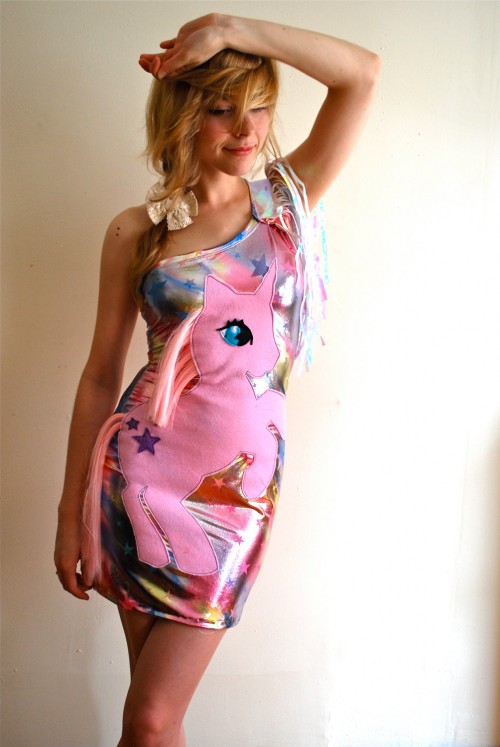 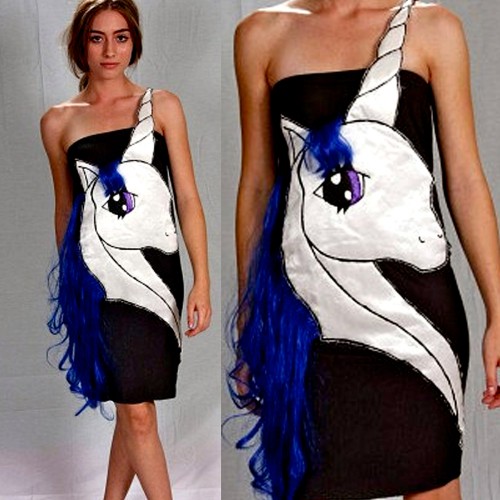 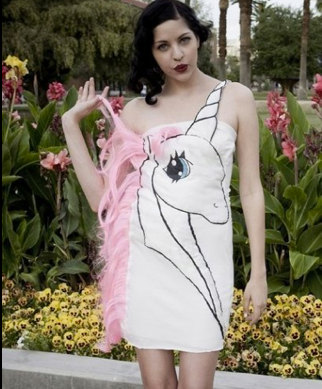 Consider it stuff I could have tweeted if I weren’t so long-winded & too lazy to work within the 140 character limit; yes, you can take the title to mean the following are odd notes by the curator, or notes from the odd curator.

Upon donning my new bra, making adjustments & checking self out in mirror: Why aren’t bras made in as many flesh tone shades as makeup — they are both the foundations of “beauty,” right?

Eldest daughter is selling magazines for high school choir. Upon paging through the catalog & spotting Horse and Rider magazine: They should have Horse & Writer magazine… I still don’t have a horse, but I’ve never outgrown my appreciation; I can’t be the only one…

Reading to hubby the latest Tweet from @shitmydadsays. Post giggle, I say, “Ah, if only our dads abused & confused us more… Well, my biological dad probably would have, but he died when I was little.” I would have added on a glib, “What’s your dad’s excuse?” but hubby’s face but the kabosh on that.

And now what you’ve been waiting for… This week’s Whatjamacallit Wednesday.

I found this in a box full of old pinbacks at a local antique shop — the pin reads “Menopausal Women Nostalgic for Choice.” 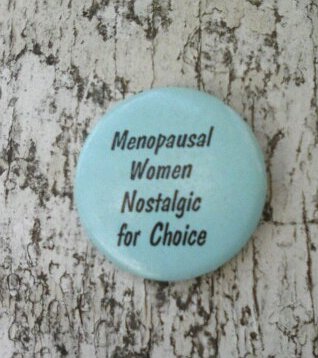 See, if you are crazy enough to diligently pour through the hundreds of things in a box or pile, you can find an awesome surprise.