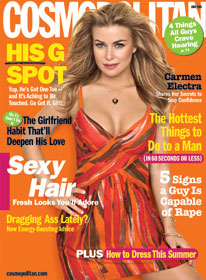 The article, featured on the cover with the line “5 Signs a Guy Is Capable of Rape”, is called “How a Date Rapist Works”; the related sidebar pieces are “Reading a Rapist’s Body Language” and “Personality Traits That Make You Vulnerable”.

On the surface you might think this helpful advice — but only if you believe the imperative premise that women are the ones responsible for men’s behavior. As McDaniel writes:

The article, like its gray-rape predecessor, ends up being both insulting to women and victim-blaming to boot. If a rapist could be identified with such easy-to-spot criteria, what woman wouldn’t readily discern a potential assailant and haul ass out of that bar? Rape victims are traumatized enough without being made to feel that their rapists were giving off clear signals that they were too stupid or oblivious to read.

(For the record, the “grey rape” article referred to was published in Cosmo back in September, 2007; you can find that pile of steaming crap here.) 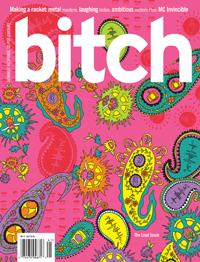 It’s dreck like this that has had me avoiding Cosmopolitan magazine for a long time now. I hope you’ll avoid it too because the only help you’ll find in those slick pages are how to perpetuate the abdication of male accountability.

Does anyone really need that?

While I want women to be safe (and I hope Cosmo does too), it’s absurd, irresponsible, and down-right hurtful to put the blame for male violence on female victims.

As McDaniel said, “It’s not so surprising that Cosmo still seems to think so little of men that it refuses to hold them accountable for their behavior, but couldn’t they try to expect more from women?”

Instead, grab a copy of Bitch — better yet, subscribe. Because Bitch does expect more from both men and women.