Advertising based on fears — especially the female fears of beauty, “catching” and “keeping” a man — are nothing new. This vintage print ad for Dorothy Gray captures those horrors. 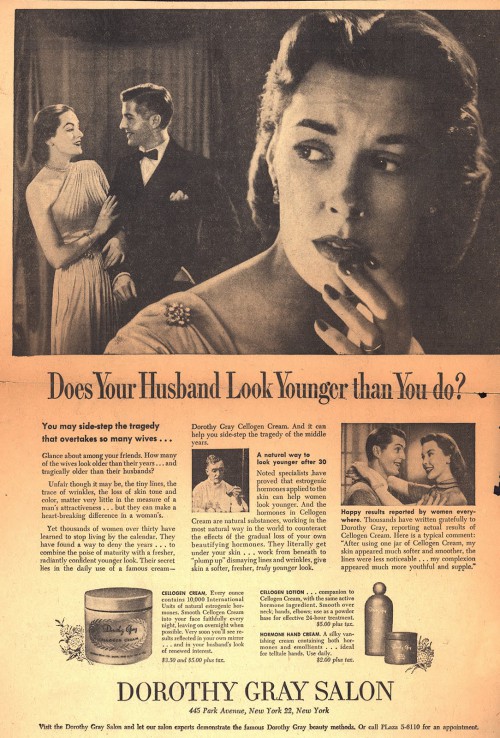 However, this vintage TV commercial for a pre-cold war cold cream preys on more than beauty fears. Circa the 1950s, this commercial for Dorothy Gray Cosmetics boasts how the cleanser removes two and a 1/2 times the radiation of other cleansers. No word on how much radiation is left behind or even it it’s enough to kill you…

I just love everything about vintage Princess Pat powder

— from the logo and colors to the name that, once in your brain, of speaking aloud you simply cannot refrain. 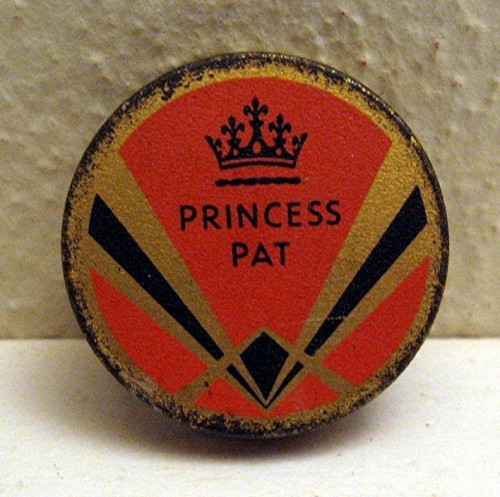 Also in the December issue of Psychology Today, Mina Shaghaghi reports on the findings of a series of studies by Richard Russell of Gettysburg College which explains the “allure of dramatic eye makeup and va-va-voom red lips on women has biological roots.”

It seems that what glamor girls do (whether they know it or not) is increase the contrast of the eyes and lips against the rest of the face — and such contrasts communicate femininity and attractiveness.

These studies indicate that it’s not so much the colors of your cosmetics, but that they darken the eyes and lips, making the rest of your complexion pale even more by comparison.

For more on this, visit Richard Russell’s Research page (scroll to the bottom for the Artificial Enhancement of Facial Signals studies).

I wasn’t going to answer this question right away, but seeing as 1) it’s holiday time where dressing more glamorous is de rigueur (or at least more possible), 2) that Twolia’s own Josi has written a great tutorial on how to apply those perfect red lips, and 3) three of my friends and I were just debating this very topic, it seems now is the time…

Do men really like women who wear makeup — big hair and sexy red lips — or is this something we do for other women? Men often say, “I prefer you with less makeup and more natural looking”… Yet who are they looking at in magazines, movies and yes, at clubs? And the related question, when women are so gussied-up (no matter who it is for), are men put-off on the action aka kissing or touching you?

There are many kinds of men, so this is going to be pretty generic advice; but…

For the most part, men are just as much part of this culture as we are and as such, they see and are as moved by beauty as we women are — in fact, they may be even more manipulated by it and our female use of it. Sure, some women eschew such glamor and so we can reasonably expect some men to do so too; but as a general rule, men find the woman with sexy red lips beckoning to their libidos.

We may buy the products, but they buy the end result.

Does such gloss and glamor keep his attentions at bay? As a general rule, I say, “Nay.”

They may not want to wear the red smudges in public, but in private… When men are attracted, aroused, they really aren’t concerned by such things as lipstick smeared on their faces or hair that deflates as it rubs on the pillows.

We women are though.

We women often hold men at arm’s length, telling them not to muss the ‘do or smear the face. In that sense, what man wouldn’t say he prefers his woman au naturel? So ask yourself if you haven’t trained your partner as Pavlov did his pooch — only you make your mate drool but then don’t give him the treat he seeks.

There are, of course, other times when a man may state his preference for your more natural look.

If he said it in response to your disclaimers of, “Oh, but I’m such a mess!” when he called to say he’s in the neighborhood or otherwise has suggested a sudden visit (or just impulsively stopped by), it’s simply the proper thing for him to say.

If he said it just before, during, or after sex, well then, “more natural looking” is about as reliable as those three other little words said at the time (I love you).

But there are times when a man says he “prefers you without makeup” or “more natural looking” (and I’m assuming here that you are not applying it like a clown!) when he may just be full of crap.

The best way to know that such statements are bullshit is if he first approached you when you were your glamor-doll self or if you typically are a makeup-wearing woman (at least whenever he could see you) — because, baby doll, if he was attracted enough to your glamor-doll self to ask hit on you or ask you out, then he likes that look.

It may mean that he’s attracted to painted ladies, but fears others are too and doesn’t want you being attractive to others.  That’s why I said his claims were bullshit.

It’s not only a contradiction, but it’s a sign of insecurity.  Especially if he’s derogatory about you being “made up.”  And men so insecure as to manipulate you to meet their needs are worse than a waste of time — they can be dangerous. (Such manipulation is just steps away from controlling and abusive behavior.)

It doesn’t matter if he is insecure about himself, fearful because he’s ‘been burned before’ by a cheating (or ‘promiscuous’) partner, or just has this view of women as in control with their attractiveness and is upset by it; if he’s so insecure that he feels your application of red lipstick is akin to Roxanne putting on the red light he’s too insecure in himself to be partner material. And don’t kid yourself, ladies; he’s not even good casual dating material because he’s going to see your casual attitude and read that as proof of his fears. Just walk away.