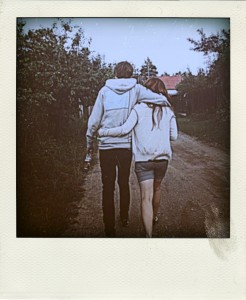 If the holiday of romance has you looking backwards, remembering a love you once had, a first love, instead of celebrating a romance of today or eagerly looking for the romance of the future, I ask you to limit your indulgent trip down memory lane to just this one day…

Anything longer, anything more than a fond remembrance over a carton of ice cream (shedding of tears optional) is putting your romantic future at risk.

See, we have this tendency to remember the relationships of the past through rose-colored glasses or an emotional layer of sepia tones, glossing over the reasons why it didn’t work out. And the further away in time those relationships were, the worse it gets.

Like the cultural recalling of the “good old days,” we tend to forget that those easy-peasy, lemon-squeezey relationships of yesteryear seem so easy largely because we were younger, our problems smaller. Especially when seen with the older & wiser (and somewhat world-weary) eyes of today.

But the danger of living even remotely in past romance isn’t just that we might be missing the moments of today; it’s that we are seeking simpler times, simpler relationships, setting up unrealistic standards for the relationships of tomorrow.

So feel free to enjoy or even wallow in the romantic past for the day. A day. But don’t try to live there.

Or you won’t ever be happy where you are now.

Image via Since She Left.

In this month’s issue of Health, reader survey results on the subject of sex.

Some survey results (and my comments):

I do believe the “secret” part is a problem, as it connotes an attempt to cover-up. My husband never asks me who I email… If I would be emailing with a former boyfriend or lover, would that mean I would be lying or keeping a secret by omission? Or does his not asking just mean he doesn’t care about my endless emailing? *wink*

If it’s the 8th grade or high school varieties, it isn’t the fear of a “wildly jealous husband” that keeps you mum, it’s the embarrassment, dears.

64% say they “absolutely do not” mention their sex lives via Twitter or other social media site, saying it’s “a perfect example of TMI” — yet 29% “might” read someone else’s “sex tweets”

I suspect this has more to do with people “marketing” aka spamming themselves via Twitter et all and therefore aren’t showing any real aspects of themselves to begin with. But how can your sex live be any more ridiculous than discussing your love or reality television? And perhaps more importantly, how can tweeting about your sex life be any less alienating, personal and off-putting then disclosing your politics or religious preaching? Now that’s too much information. 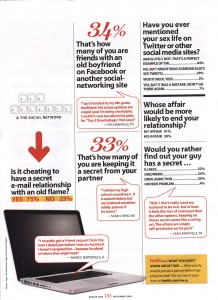 The questions was: Whose affair would be more likely to end your relationship?

Naturally, this discloses that Health has limited it’s questioning to heterosexual couples; uncool. But the question itself, the apparent answer options, and the answers themselves are sort of confusing — not because of the nearly 50-50 split, but because I’m not sure how the respondents interpreted the question… Were they answering that his affair would mean he was ready to move on, so their relationship would end? Or did they mean that they would, selfishly, be (albeit slightly) less tolerant of his affair then they expect him to be of their own?

I’m not sure how I would interpret the Q & A, so I’m completely unclear as to my own answer.

There’s more from this survey, but I’m saving it for later.