Continuing to salute men who care enough to do something, I bring you the happy news that Moby has announced that he will donate 100% of the proceeds of his three California tour dates to help the state’s domestic violence shelters which have been struggling ever since Governor Schwarzenegger eliminated all State funding for shelter services back in July.

For more, you can see this CNN video with Moby.

I’d like to be all poetic and say something witty, like how the pen may be mightier than the sword, but music is mightier than the governor’s pen, but well, I’m just glad someone is doing something. And, as Moby also reminds us, you can do something too: donate to the CPEDV.

Men Can Stop Rape helps us all celebrate Domestic Violence Awareness Month with a sale:

Target young men with inspiring images and messaging that highlight how they can be strong without overpowering others or resorting to violence:

So when men disrespect women,
we say that’s NOT RIGHT

Mention code DVAM20 when ordering 10 or more posters, 50 or more postcards, or 2 or more banners and receive 20% off the subtotal (before shipping).

Sale ends 10/15/09 — and you must use the promo code on your order form to receive the discount. Now shop already! 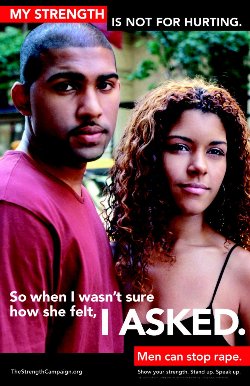 Continuing my support of men who “get it,”, today I salute Men Can Stop Rape, Inc. (MCSR), an international organization that mobilizes men to use their strength for creating cultures free from violence, especially men’s violence against women.

Our Mission
To mobilize men to use their strength for creating cultures free from violence, especially men’s violence against women.

Our Vision
To institutionalize primary prevention of men’s violence against women through sustained initiatives that generate positive, measurable outcomes in populations throughout the world.

A World Leader
Since its inception in 1997, MCSR has led the call to redefine masculinity and male strength as part of preventing men’s violence against women. In 2007, MCSR was named the United States Changemakers winner in the competition to identify the world’s most innovative domestic violence prevention programs, sponsored by the Robert Wood Johnson Foundation.

A Comprehensive Approach
In contrast to traditional efforts that address men as “the problem,” MCSR’s pioneering Strength Campaign embraces men as vital allies with the will and character to make healthy choices and foster safe, equitable relationships. Our youth development programming, public education messaging, and leadership training together constitute a unified and comprehensive campaign that has been launched in states and cities around the country.

Give MCSR your fingers — not the finger! Help Men Can Stop Rape with their upcoming mailing:

MORE: MCSR needs your help for our upcoming mailing! We’ll provide dinner, you provide your invaluable stamp-sticking, envelope-stuffing skills. Please RSVP (email cporter-borden (at) mencanstoprape.org) if you can attend. We greatly appreciate your help!

I do a lot of talking here about the fact that men need to take responsibility for their personal roles in rape and violence against women — this includes making a loud vocal stand against such crimes & attitudes. So I figured it was about time to show some of the men who are doing such work.

To debut the series saluting men who care, the work of the White Ribbon Campaign, the largest effort in the world of men working to end violence against women (VAW):

In over fifty-five countries, campaigns are led by both men and women, even though the focus is on educating men and boys.

At the same time, we do think that some men have learned to express their anger or insecurity through violence. Far too many men have come to believe that violence against a woman, child or another man is an acceptable way to control another person, especially an intimate partner.

By remaining silent about these things, we allow other men to poison our work, schools and homes.

All images shown here are posters belonging to the White Ribbon organization; go get yourself some & spread the word while supporting the cause.

For more on the White Ribbon Campaign:

You can also keep up with them at Twitter. (I am.)