You know, by now, that I horde vintage magazines, publications, newspapers, and other ephemera. (If not, please send me your recipe for Denial Sauce; the anti-women politics of the time are hard on me.) So I’m completely smitten with Women’s Page History: “A blog devoted to women’s page editors beginning during World War II (when many women were hired by the newsrooms until the war ended) through the early 1970s when the women’s pages were transformed into lifestyle sections.”

The blog is run by Dr. Kimberly Voss, of whom I am more than a bit jealous… I long for some sort of credentials to make my piles of old paper legit. *sigh*

But the word “professor” before your name has more than a cache — it has the clout that opens doors. As in getting your phone calls routed properly, messages and emails returned, etc. Of that, I am envious.

Of course, my biggest problem is not specializing — not narrowing my focus. (Watch comments at this post for a link from my other blog, Inherited Values, on that.)

On a related — to me, anyway — note, check out Jen But Never Jenn (who I met through a mutual fascination of vintage living).  She made her sister and her future brother-in-law a magazine timeline as a “sense of what it was like NOW vs. THEN.”   Amusing, yes. But also an awesome way to put your collection to good use. 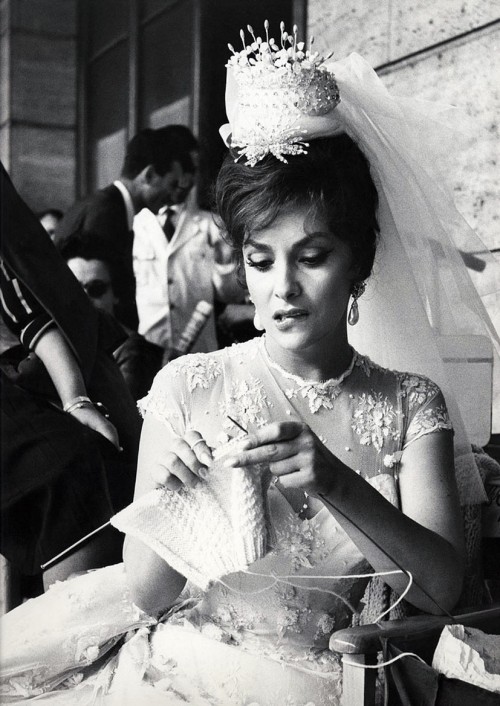 ) showing a home decorated for newlyweds. 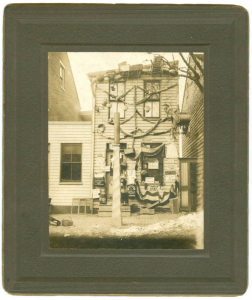 Note the old paper lanterns and the plethora of handmade signs — most of which resemble tombstone R.I.P. notices. 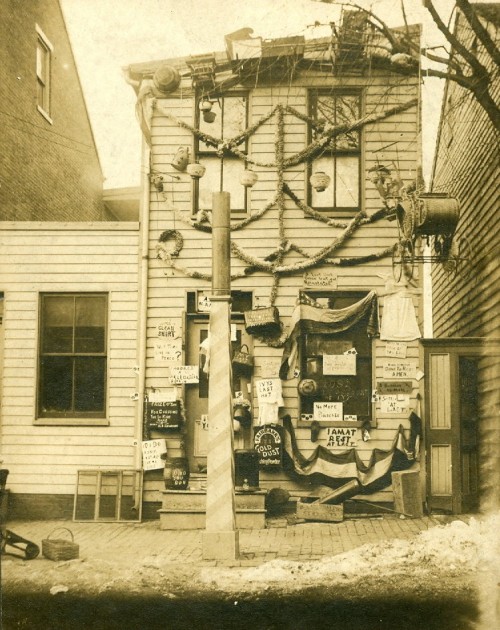 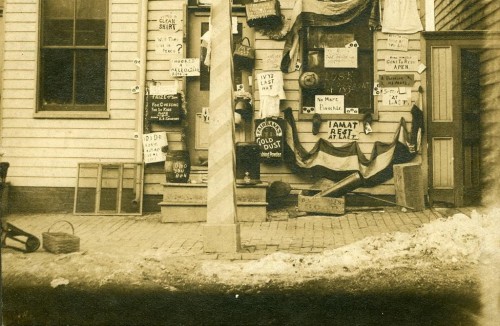 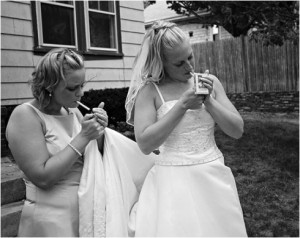 There’s a whole heck of a lot of good relationship stuff on Twolia; I thought, just in case you never leave Relationship Underarm Stick, that you should see some of it…

Twolia now has a new relationships blog where you can make your own post — sort of like a forum. It covers not only dating & marital relationships, but friendships & relationships with family members & coworkers as well. Go check it out.

Over at Kitsch-Slapped, Deanna’s done the research on a sad story of romantic misfortunes that took place in the late 1940’s.

Deb Amlen (her book, It’s Not PMS, It’s You is due Spring 2010 from Sterling) has answered a letter about sleeping with your professor over at Miss In Your Business.

Survived all your relationship stink, and now you’re getting married? Congrats! Now see what you need for your wedding over in the Twolia Shops.

Married, single, divorced, whatever your situation, music tells your story. You know… Without breaking up and making up, there might be no music… So check out the music on Twolia — I’m digging Bri Anne Michelle and Ellee Ven’s Dangerous Diversion. (Yes, I can enjoy pop-country & hip hop too; how about you?)

If you’re packin’ heat on your wedding day, chances are it’s not the typical cold feet. Run away, bride; run away. 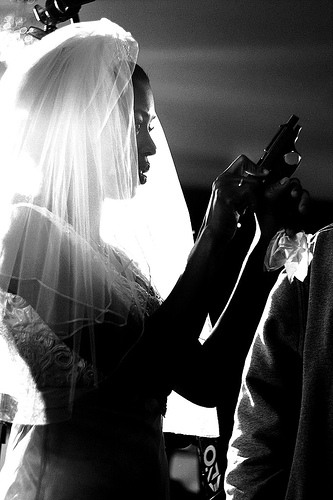 Are a lot of your friends announcing engagements, getting married and having the stork visit — so many, that you’re running out of party ideas and ways to celebrate? Here are 13 vintage ideas, loaded with kitsch and just begging you to use them, maybe even update them a bit…

Remember — all the images get much much larger when you click them — so read away!

1. How To Tell The Secret, aka bridal announcement ideas, from The Bride’s Party Book, published by Dennison. Some of these may be tweaked to fit other announcements — or even used to invite guests to the next event. 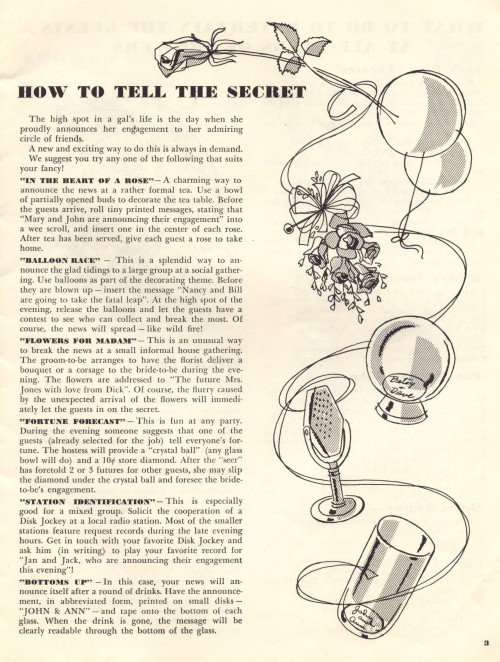 2. The next few bits come from Bridal Shower Party Games, “For As Many As 20 Guests” (presumably because it originally had 20 copies of each of the game sheets), Leister Game Company, Toledo, Ohio, (N-1400). The company is still around (but the site isn’t working — or they did just perish — so some links are to Goggle cache). 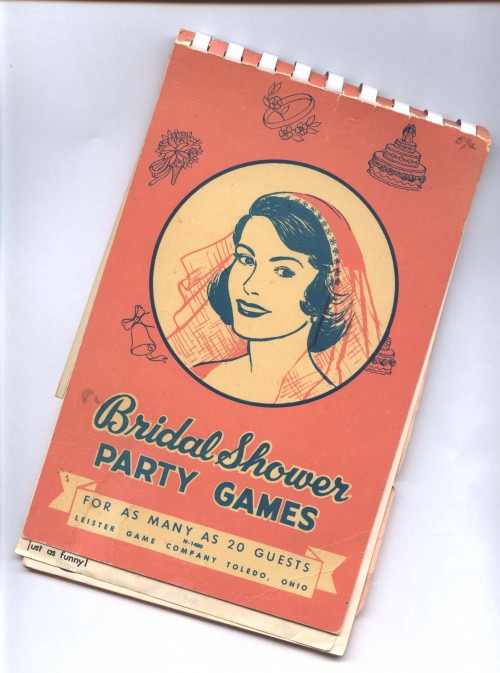 Inside the front cover, ads for baby & bridal party games and products. The company has gotten racier since then; now they have “Naughty Bingo” and “Condom Blow Jobs”. So you may prefer the quaint & corny vintage Leister games.

One of the party games is Card Pass — “a relay race that’s a little daisy!” 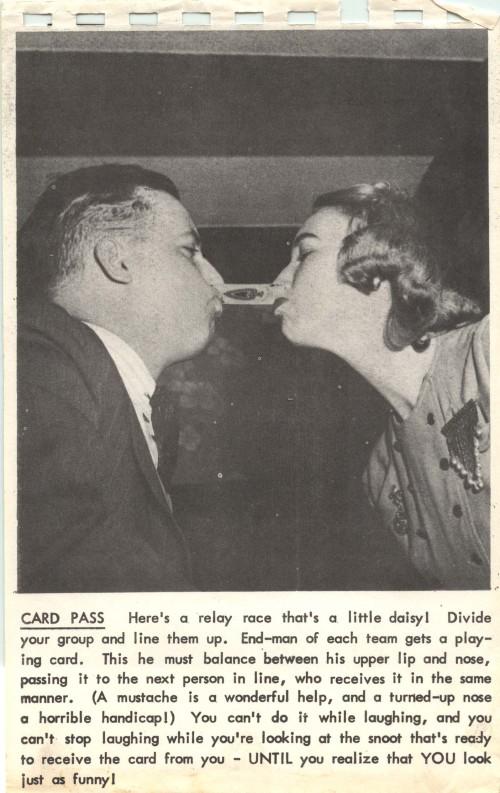 Totally believe you should open a brand new pack of playing cards for this; you don’t know where the hands of previous card holders have been and you’ll be sticking them in your mouth. :shudder: 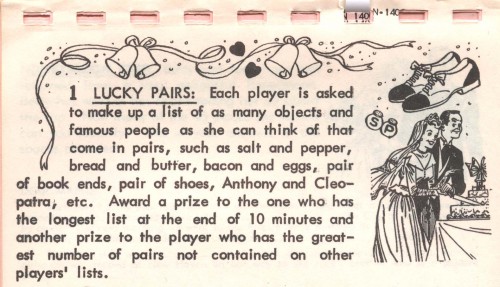 4. Want-Ad Marriage (which, by the way, is also a fun game to play on girls’ night — having you write each other’s ads): 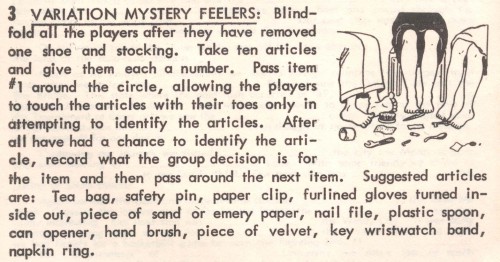 (Don’t know about you, but I don’t want any of the objects back — they’ll be covered in toe-jam!)

(I could be crazy, but didn’t we just do that?)

7. This next one is a fill-in-the-blank game — but don’t get excited thinking it’s a Mad-Lib; it’s a geography quiz. You fill in the blanks of the Honeymoon Trip. 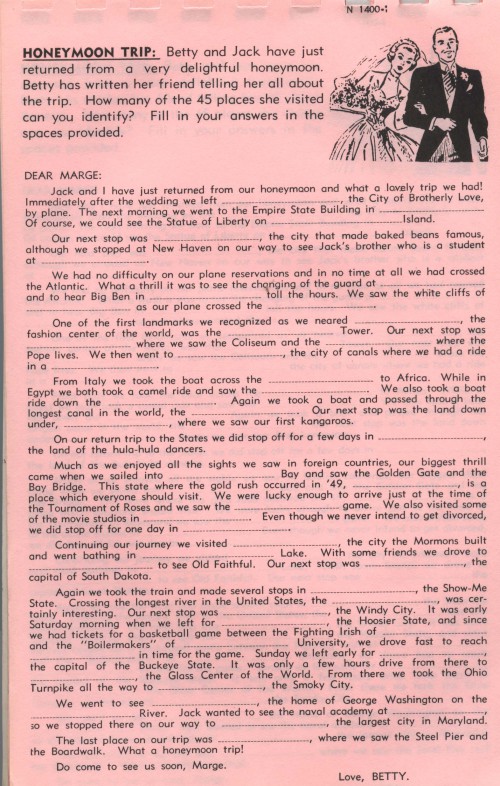 Sadly, the answers were on the back cover which has been cut; so you’ll have to figure out some of these by yourself. (Treat it like a test — like you have to be this smart to get married.) 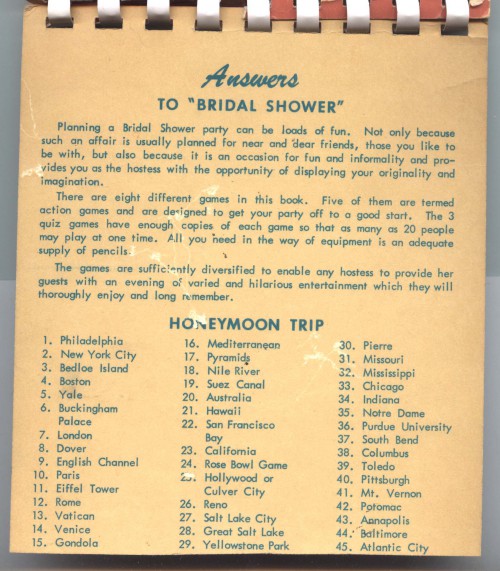 8. This next one, Wedding Spell, is some twisted spelling bingo thing. Too complicated for me these instructions are. May Yoda help me. 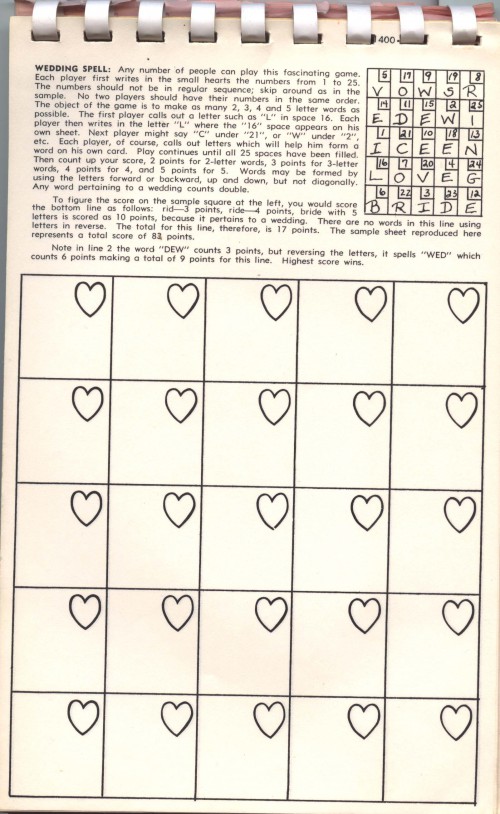 9. Back to the Dennison’s book again…

This time, it’s the bride who gives a party (and isn’t it about time!) 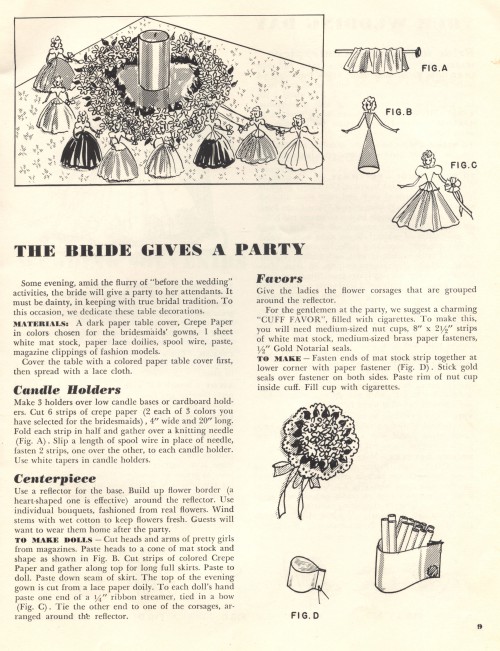 And the legal team wants me to tell you not to stuff the cuff party favor with cigs; totally not healthy or PC, you know.

I’m totally skipping the wedding day stuff; I’m certain your bride is not going to let you make crepe paper couple centerpieces. Or crepe paper anything. That doesn’t make her Bridezilla either; she just doesn’t want the kitsch enshrined forever in photos on the in-laws mantle.

(If, for some reason, you need these crepe paper frights delights, let me know.)

10. “There Went The Bride” is “A Mock Wedding for Your Anniversary Celebration” — complete with kitsch skit.

The bride “as seen by her future mother-in-law — carries rolling pin decorated with flowers”.

The clergyman begins the ceremony with, “Dear Friends, we are gathered here before this congregation of fellow sufferers to join this headstrong couple with the shackles of matrimony. If anyone present can show just cause why this painful ceremony should never take place — for heaven’s sake — speak up — tomorrow may be too late!”

The groom, repeating after the clergyman, vows: “I ____ take thee ____ for my duly wedded wife, to hold, if I have to, from this day forward, in spite of your ceaseless conversation, your unappetizing cooking, your nagging and complaining, your silly girl friends and willful spending — until death do us liberate.”

The bride, repeating after the clergyman, vows: “I ____ take thee ____ for my duly wedded husband, to hold if I have to, to tolerate your black cigars, to laugh at your corny jokes, to clean up after your poker parties, to balance on your budget, until death do us liberate!”

It’s not just me who sees the bitter irony in these two sets of vows… Is it?

Well, at least the ceremony ends with handcuffs… :wink:

11-13 First comes love, then comes marriage — and if you make it through the mock wedding anniversary celebration — next comes your friend with a baby carriage. Some announcements for the new arrival: 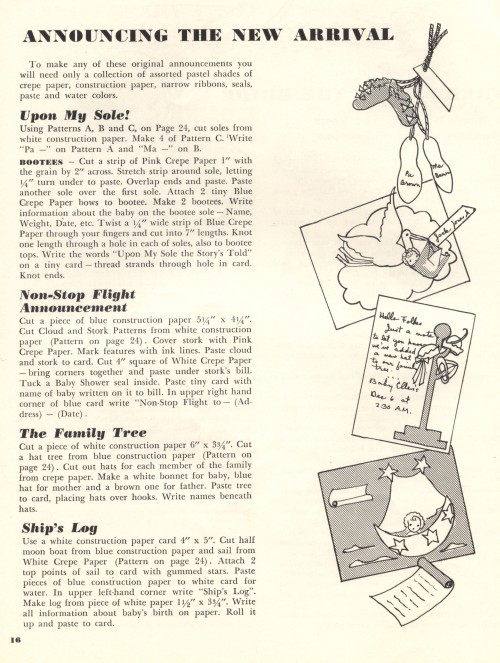 Upon My Sole! Announcements with a shoe theme
Non-Stop Flight Announcement has a flying stork theme
The Family Tree is an announcement stretching things — using a hat rack?
Ship’s Log has a nautical theme.

All the patterns for these baby announcements are found on page 24 and the scan is here: 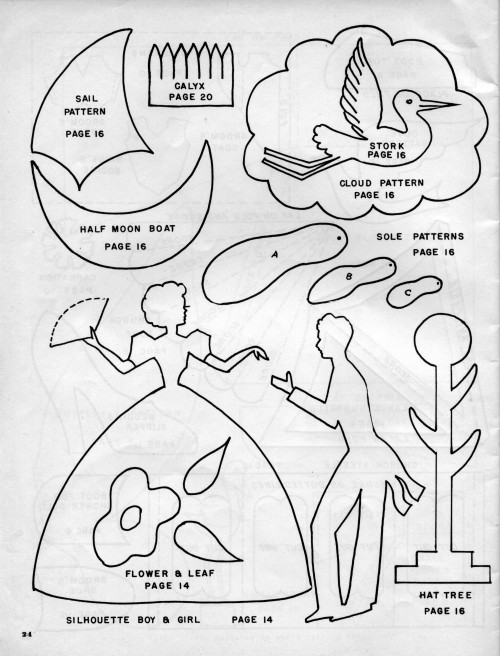 Get the Thursday Thirteen code here