Don’t hate me for wanting to get one of these Zulu Lulu swizzle stick sets — it’s just too horrific not to own if you’re into non-PC things, which I totally am. As a woman & a collector they leave such a bad taste in my mouth, I just had to own them. 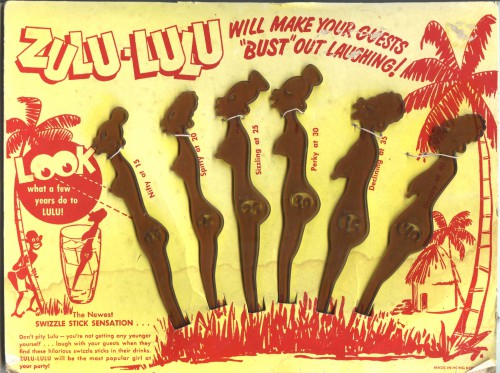 I often shy away from the Black Americana (lest folks take my interest the wrong way), but sometimes, like the vintage postcards, they are literally attached to other things. These vintage swizzle sticks are not physically attached to something else, but are attached in ideology to things that make a feminist’s heart ache (or sing, if you’re into documenting such things). Along with racism, there’s sexism & ageism in these swizzle sticks.

Inside each woman’s abdomen (or uterus) is a number representing her age. As the number increases, her breasts droop, her ass grows, and her tummy bulges. She may be Nifty at 15, Spiffy at 20, Sizzling at 25, and even (despite the nipple pointing downwards) Perky at 30 — but she’s Declining at 35, Droopy at 40, and I guess women look so bad after 40 that there’s no sense in making a swizzle stick. (There are rumors that there’s another set of swizzle sticks with Zulu Lulus at 50 and 60 years of age; but I’ve never seen them.)

While the messages of these vintage barware pieces are more transparent than the brown plastic they are made from, the promotional holder is more pointed than those plastic swords used to skewer cherries, reminding everyone every woman just what men think of them:

Don’t pity Lulu – you’re not getting younger yourself…laugh with your guests when they find these hilarious swizzle sticks in their drinks. ZULU-LULU will be the most popular girl at your party!

There’s so much sexism, racism & ageism in these swizzle sticks that it had to ooze out into the drinks being served and from there, infect all those at the party. I guess that’s why your guests would “‘bust’ out laughing”.

Today, we’d bust out in tears; or just spontaneously combust.