When I was a little girl, my parents would often get together with my mom’s parents & siblings to play cards — usually Cribbage, but sometimes Sheepshead. When I was too young to play, and even when I was older & had learned to play those games but then forgot again because I preferred my nose in a book, I played games by myself. Along with the classic Solitaire, one of the games I played was Shutbox.

Shutbox was what we called it; but I guess that’s the abbreviated name for Shut The Box. 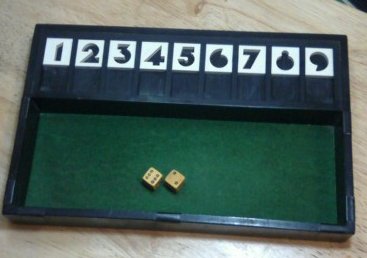 The game is simple, but because your success at the game is up to the whim of the dice, it isn’t as boring as it sounds. (Of course, like Solitaire, when you win at Shutbox, you believe it’s entirely a game of skill.)

You roll both dice, and then shut, flip or slide, the numbered tiles that add up to the total sum of the numbers rolled. For example, I rolled a 12, so I slid the 9 & 3. 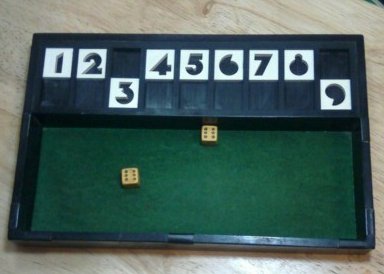 You roll again, and do the same — but once a number is slid or flipped, it cannot be used again. 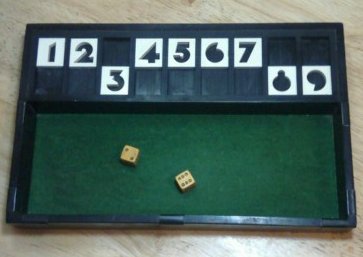 Over & over again you continue until either:

* the remaining tiles total less than 6, and only 1 die is rolled (this rule varies by household/location)

* you’ve flipped/slid all the numbers and “shut the box”

When you shut the box, you win; but when you have numbers left over (numbers that cannot be slid/flipped), you add them up and that’s your total to beat next time.

Shutbox can be played alone, or you can play with an unlimited number of people, each trying to best the other at “shutting the box.” When you play against others, the person with the lowest score wins — and if more than one person shuts the box, then those people compete again (sort of championship round). 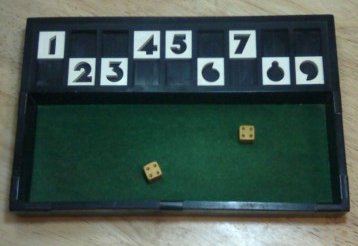 And, I guess, in some schools (and Mensa gatherings), the game is played based on multiplication, etc. 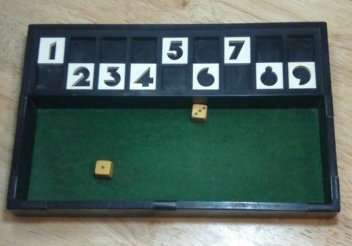 My game is a cheap old plastic one, but when I spotted a nice newer wooden one a week ago at a rummage sale (for a whopping 50 cents!), I got it for my 20 year old daughter. Not only do I love the mod style digits on my plastic Shutbox game, but this one, with it’s electrical taped sides, was from my grandparents. They gave it to me when I moved out and I can’t tell you the number of memories it has for me…

Not only do I fondly remember my grandparents teaching me to play, family members playing with me, and my afternoons & evenings playing Shutbox at grandma’s house while the adults laughed and played cards, but that game was my sole companion as a single parent to a baby who sometimes had to cry herself to sleep.

And then there were the times Shutbox was the center of Girls’ Night Out and turned into a drinking game or a gambling game (hey, IRS, we played for, uh, pretzels – yeah, pretzels). We didn’t pervert the family friendly game; Shut The Box has a long history as a bar or pub game — and before that as a game sailors played to pass the time on long voyages. There are even Shut The Box bar leagues in some places.

So, the next time you’re at a garage sale, flea market or thrift shop & you spot a Shutbox (with or without dice), grab it and give it a go. It’s a very versatile game. 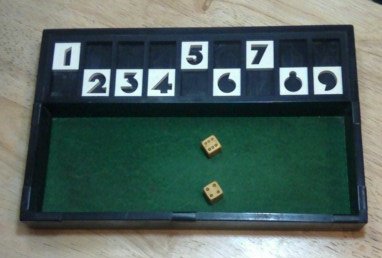