As usual, I spotted a retro game at the thrift store and had to spend a whopping $1.99 — and make someone play it. This time the game was Parker Brothers’ Careers and the victim was the husband, Derek. Fortunately, the only pieces missing were two dice — and, after lengthy searching, I was able to remedy that so we could play. (No one escaped playing games with me that easily!) 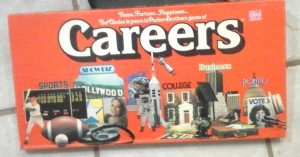 Unlike the What Shall I Be? games by Selchow & Righter Co., this game isn’t so much about the rah-rah-sis-boom-bah “you can be anything you want to be” as it is about the “success formula.”

Instead of exploring career options and considering the education and work involved in landing that dream job, Parker Brothers Career Game reminds game players that success not only is about the games we play, but that one can actually define their success. I’m not just waxing poetic; it’s right there on the game’s box: “Fame… Fortune… Happiness… The Choice is yours in Parker Brothers game of Careers.” (Parker Brothers even registered it’s board game and equipment trademark under the “Fame, Fortune and Happiness.”)

Game play seems a bit complicated (there’s not only a set of instructions, but what we’d now call an FAQ printed inside the game box) and might be a bit intimidating at the start (hubby & I were awfully glad we hadn’t opened any wine coolers to drink while playing), but once you set up the board & roll the dice, it’s much easier than all the type implies. 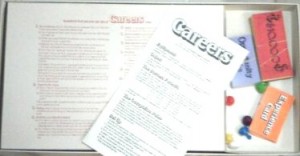 Like Monopoly, you begin at start and get paid every time you pass it; unlike Monopoly, this game doesn’t need to be all about money, for before you roll the dice, each player sets their own goals.

Each player must define their own idea of success by designating their individual Success Formula — and actual equation by which they will win. While each player must get 60 points, they may divide their points up, in any way, between the three categories of Fame (stars), Fortune (money – each $1,000 being 1 point) & Happiness (hearts). Since we were a bit bewildered at first, we just guessed numbers to fill in the blanks. Hubby went for the mathematical “divided by three” and gave himself a goal of of 20 each. I went for $30,000 (30 points), and 15 each for Fame & Happiness. 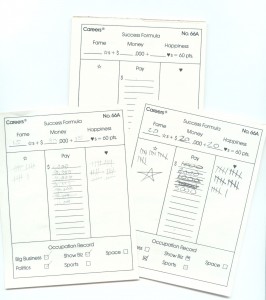 The you move around the board, based on the number of spaces the dice rolls tell you & the information based on the cards you get, and the directions on the spaces themselves. Along the way you have options to pay for publicity (earning Fame Stars), gamble in the stock market & at Las Vegas (earning money), and spend time in Paris and Hawaii (earning Happiness Hearts) — again, if you have the money to spend on such things. Of course, just as with real life, you may also fall prey to hospital stays, unemployment, taxes & rent.

You earn college degrees & work experience by following the individual career paths (using only one die for those areas). Some of the career paths offer more money to earn, raises in salary (what you earn each time you pass “start”), Fame & Happiness points, as well as “Opportunity Knocks” and “Experience” cards. 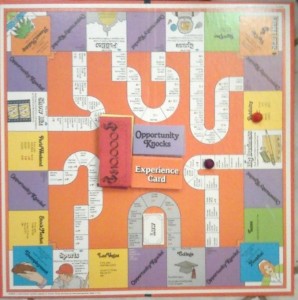 In this game, your specific career paths are limited to Big Business, Politics, Show Biz, Sports and Space; which sort of parallels the pop culture ideas of careers in the late 70’s. (More on that here.) Navigating the side trip career paths which offer the best possibilities for your self-created Success Formula is how you attempt to control your destiny. Want more money in your pocket? Try Sports (it apparently brings lots of Happiness too). Want pay raises? Try Big Business. Politics and Space bring the most Fame; Show Biz is one of the shortest career paths, but you can find some Money and Happiness there too. But it won’t be easy…

Not only must you rely on the roll of the dice to bring you to your hopeful career path, the luck of Opportunity Knocks cards, and avoid the treachery of not only spaces but other player’s actions “bumping” you into Unemployment, but you will need to pay your way into each career, have the proper college degree &/or work experience to get into each career. Since Derek had some poor luck of the dice early on, he was unable enter any careers for quite awhile, forcing him to stay on the outside tack and pay taxes etc., prompting hit to comment that this game was a lesson in “no matter how hard you try, if you don’t start with enough money, you’re doomed.”

But then, I did win.

Seems Derek, the one reading the instructions, misunderstood the difference between “Money” and “Pay” on the score pads, resulting in the mistaken notion that your Pay needed to reach the same amount of Money in your equation (it doesn’t; Money equals cash you have in hand). So at that time, since I had gobs of money, I was declared the winner.

The irony of two Bohemian “creative types” screwing up the money component of the equation was not lost on us.

Overall, I think it’s a very cool game. But then, maybe my standards are low; I just love board games & when they are “old” I’m twice as happy to play them.

The game has many variations (you know I looked ’em all up!), some of which are very cool; others nauseating. The worst of which came in 1990 when Parker Brothers thought a hot pink pandering Careers for Girls board game would profit big time. 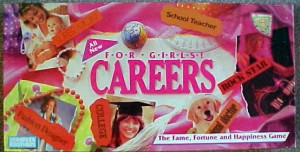 The career paths girls could travel in this game were schoolteacher, rock star, fashion designer, college graduate, supermom, and animal doctor. And the game’s strategy was greatly simplified — because females can’t be bothered by adhering to strategy; we’re restricted to the whims of our biology, emotional whims, and itty-bitty brains. (Heck, we don’t even know what a veterinarian is; we use “animal doctor.”) So, to keep us entertained and flushed as pink as the game’s box, players were asked to perform dopey things like “Describe your dream husband” & “Show us how you dance with your main squeeze.”

When Susan Engeleiter, head of the U.S. Small Business Administration, caught wind of this game, she knew it was more than hot air — it came from Parker Brother’s derrière. This is how she responded:

Engeleiter said she was amazed the game didn’t include such careers as business executives, government leaders, astronauts, scientists or moms without the prefix “super.” “Parker Brothers is sending the wrong message to young girls,” she said. “Even Barbie dolls come with business suits these days.” Then she added, “I am raising my daughter to believe there are no limits on career choices for women. If the Parker ‘Brothers’ were the Parker ‘Sisters’ this game would never have passed ‘Go.'”

In response, Parker Brothers’ spokeswoman (note: that’s not company “super spokeswoman”) Patricia McGovern stressed the game is purely for entertainment and “is certainly not to communicate that only certain careers are limited to women,” adding that the game was designed by a woman, art was managed by a woman and the product manager was a
woman. (No word on how many of those women threw-up Pepto-Bismol, hence the game’s profuse pinkosity.)

But you know what? I want them all the versions of this game — including the nauseating “girls version,”

because it’s part of our history. Let’s hope I can find the other versions of this game at my local thrift stores.