Via Eugenics Archive, a clipping from the New York Herald dated August 23, 1932 — a review of Third Eugenics Congress: 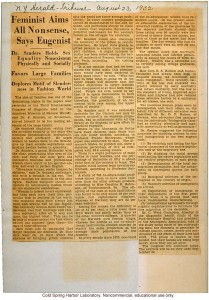 If you don’t have time to read the whole thing, here’s a snippet that might change your mind:

The size of families was one of the dominating topics in the papers read yesterday at the Third International Congress of Eugenics held in the American Museum of Natural History, and Dr. J. Sanders, of Rotterdam, proved himself to be the leading advocate of the large family.

He deplored feminism, saying that the so-called equality of the sexes was nonsense physiologically, biologically, socially and politically. He urged women hasten back to the fireside, give up their outside aspirations and produce healthy babies in quantity.

Dr. Sanders, a genial Hollander with the clear, penetrating blue eyes of his race, and curly fair hair, gave the successful business and professional women short shrift in his spirited address, delivered in perfect English.

“Nowadays women prefer fashion to children,” said Dr. Sanders scathingly, but with a twinkle in his eye, “for large families are inimical to the slim figure. Fashion designers should cooperate by introducing models which do not emphasize slenderness.

“Woman is indeed man’s equivalent, but they each have their own particular task to perform in the world. The woman’s main duty always has been and always will be the family. The university woman must know, understand, feel that marriage and children represent, after all is said and done, the highest ideal. This can be so only if women accept the task which nature has imposed upon them — the care of their offspring.”