OK, so we didn’t make a lot of money at our rummage sale this year — but we did empty our house of a lot of clutter. However, I did keep a few things that my mother had sent over for the sale. (Since she said we could keep the profits & dump whatever didn’t sell, I figured she wouldn’t mind.) One of the items I opted to keep is this odd, badly chipped, vintage painted wooden man. 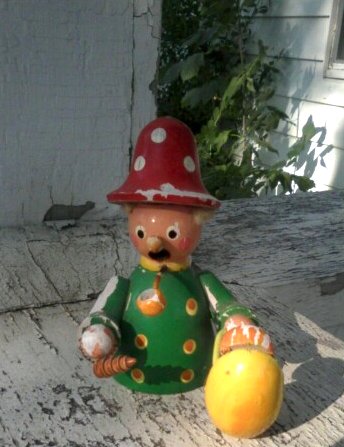 I had dubbed him “the little German gnomish guy.” I can’t say why… due to his red-dotted mushroom cap hat, basket full of mushrooms and handful of pine cones he could be Swiss or Austrian or some other European dude.

Anyway, we had set him out for sale for a whopping 50 cents — and still couldn’t sell him. Maybe because we didn’t know what he was. Other than “odd,” I mean.

People picked him up. A lot.

In case you aren’t familiar with having yard sales, or selling at flea markets, etc., there’s always a “little German gnomish guy” at every sale. One object that, for whatever reason, is continually picked up, asked about, but doesn’t sell. At least not for a very long time. It’s not because it’s too highly priced (this guy was only 50 cents), but because he’s unusual enough to beckon and yet too unusual for a person to justify “needing” it, especially if no one knows exactly what it is. This item is dubbed the “it” or conversation piece of the sale. (Former public sale mystery “it” items have included an antique metal buckled leather loop for some sort of horse-pulling harness-esque thing and a vintage hand-held lemon press.)

When it became obvious the little German gnomish guy was the “it” piece for this sale, we let him lure people over with his paint-chipped vintage charm and start the conversation ourselves with a, “We don’t know what he is, besides ‘vintage’ and ‘shabby gnome chic’… Do you know what he is?” 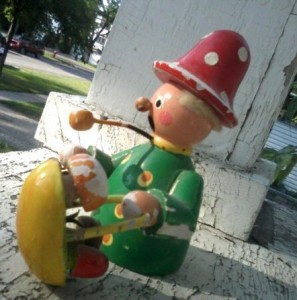 Eventually, as usual with these “it” items, a person came along who knew what the shabby chic wooden guy was: an incense burner. You set his open bottom over a burning cone of incense and the smoke wafts up & out through his little ‘O’ of a mouth, like he’s smoking.

Once this discovery was made, we slapped our heads like we could have had V-8s. Then I shuttled him the house to show the kids. “Oooooh, can we keep him?” Of course we were keeping him; we’d have to try him at least once, right?

Even if the stem of his pipe is stuck in his throat like some twisted moral interpretation of “smoking kills.” 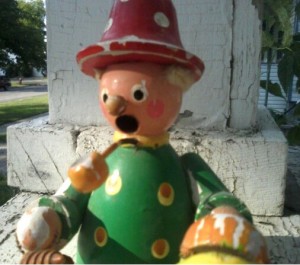