This week’s Weekly Geek is about a collection of books of one particular title:

[T]ell us, do you have a collection, (or are you starting a collection,) of one particular book title? If so, what’s your story? Why that book, and how many do you have, and what editions are they? Share pictures and give us all the details.

It will probably not surprise anyone who knows me & my “serendipitous path to discoveries” that any multiple copies of books are unintentional. Did I say “any” copies? I meant many copies… 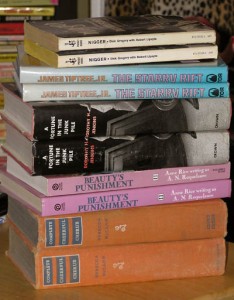 See, the problem with just letting universe steer your discoveries, is that you don’t exactly have a shopping list.

And you don’t exactly head into Barnes & Nobel with much of an agenda — at least not as often as you stroll through used book stores, thrift shops, rummage sales, flea markets, even curbside boxes on trash days, touching & paging through as much dust (and sometimes mold & mildew) as you do paper, on your way to discovery…

And when you trust universe to lead you, you buy it when you can afford it. Even if — especially if — it’s a box of books at an auction.

Online serendipity aside (for online discoveries & purchases tend to send me to my shelves to double check before I click & buy), all of this means purchasing duplicates or multiples of books is imminent. (Hubby has already documented the details of some of the titles, shown in this photo, at his book blog.) As for why we retain ownership of redundant titles, same prints even, when we are small-time sellers of collectibles who could easily sell them off, is probably more fanciful than how we’ve come to own them.

Simply put, I envision duo review opportunities — or dueling reviews, if you will, in which hubby and I begin reading the same book at the same time and then publish our reviews (rather) simultaneously. Of course, this doesn’t explain those cases in which we have three or more copies of the same book…

I believe that would come down to a reluctance to upset universe by refusing the multiple gifts it has given; re-gifting or selling of gifts given by the book gods seems too tacky — I wouldn’t want to risk peeving them, resulting in them stopping pointing the way to books.

But hubby would likely put this all down to sheer laziness.

However, it should be noted that hubby also mocks my suggestion of book review duels. And he says I mistake “greed” for “serendipity.” Clearly he is wrong about all of this. *wink*

And he must know it too; because he’d never suggest we catalog all our books or become more logical & organized in our approach to buying books, like having lists. We can’t; we don’t know everything that’s out there, so how can we possibly know exactly what we’re looking for?

If multiple copies are the burden we and our sagging bookshelves must bear for our love of books, we accept it. Happily.