I discovered a new character and fell in love with her, but I didn’t find her in a book, a film, or even in my piles of ephemera — I found her when I found that auction for the antique vampire killing kit (and now, all of you who haven’t yet read about it will, with tiny mouse clicks, stampeded away in giant droves; but I patiently, digitally await your return).

Miss Isabel Person of Port Gibson, Mississippi, is more than just some older southern lady who passed away this last January, leaving an estate of fine antiques — although you wouldn’t really know it unless you stumbled into her nephew’s narrative, published at Stevens Auction Company. I know we are all more than our possessions, more than our distinguished and character-ridden family trees, but usually these are the things I truly see when physically present at auctions and estate sales, or discover through books &/or research; in this case, I fell in love in just 1600 words.

Of course, the writing by her nephew, Jim Person, certainly helped.

In the first paragraph, his line, “The house was filled with wonderful objects from all over the world and, to a child, the furniture was so huge that the pieces took on personalities of their own,” proves that he is, like I, an imaginative soul who appreciates the romance of objects, making the reading of his abbreviated story of Miss Isabel a delight.

I drank in the history of her family and their times, and I chuckled at the young Miss Isabel who blamed the college laundry for shrinking her clothes before realizing the true culprit behind the freshmen ten. But this is the paragraph which perhaps best sums up my affection for this special lady I’ve never met:

Miss Isabel never married, although she definitely liked men. She was very attractive, impeccably dressed, intelligent and the life of the party. And did she like to party. She enjoyed company and drink and indulged in both into her 90’s. She used to tell me about her great friend Lambert Huff, somewhat of a rounder, but an intelligent businessman and a charming person. After a few drinks Lambert would often ask Isabel to marry him. Miss Isabel, after a few drinks of her own, would invariable reply, “Lambert, if you think I would marry you, you must have taken leave of your senses.” I like to think that Miss Isabel was a modern woman and that during her marriageable years, the 1930’s and 40’s, the institution of marriage, as it was at the time, was not something that she was interested in. Maybe she would be more interested in a modern marriage where men and women are on more equal footing. Miss Isabel was not one to be on unequal footing with anyone. On the other hand, she was so fiercely independent, that it is hard to see her agreeing to even equal footing.

We continually hear of (and I myself write about) how women had less choices in the past, and all this time there’s been Miss Isabel bucking the system in grand style. Sure, there are and have been other “Miss Isabels,” but this one was a southern belle with a vampire killing kit in her attic, entertaining rounders — all while, I imagine, a great twinkle in her eye.

Before Dwight Stevens himself was on the phone with me, another good southern gentleman (whose name I didn’t catch) tried to help me. When I mentioned my affection for Miss Isabel, he regaled me, in the tremendous southern story-telling style, of a story about her.

The story goes (in my not-so-fine southern story-telling way) that one day the chief of police was riding by the golf course and spotted Miss Isabel chasing after a golf cart. Apparently in one of her daily golf games, her group had decided to leave before Miss Isabel was ready and she sprinted on after them. The police chief was impressed by her speed — especially for a lady of 70 years. But as it turns out, Miss Isabel was already 90 years old.

This story must be a classic Miss Isabel story, for when Mr. Stevens did come to the phone to speak with me, he too told me the story of the 90 year old sprinting after her golf cart.

When I asked about Miss Isabel, about the possibility of obtaining a photo, Stevens told me that he found that in poor taste; Miss Isabel had just passed in January, you see. I felt like a classless (northern) idiot.

I told him that I had no wish to be inappropriate or disrespectful, I was impressed and charmed by Miss Isabel — would he be able to put me in touch with the nephew who had written the lovely piece about her? Stevens said he had no contact information for the nephew, but perhaps he would run into him when traveling next week. I hope he finds Miss Isabel’s nephew and that Mr. Person is willing to speak with me about his aunt — maybe even share an old photo I can study… Keep your fingers crossed, dears!

As if seeing an actual antique vampire kiling kit weren’t cool enough, I’d love to travel to the auction on Halloween and walk among Miss Isabel’s things — and at her own home to yet, as the auction will be held at her house in Mississippi. In fact, the auction preview on Friday, October 30, 2009 is also at her home and will even conclude “with music on Miss Isabel’s porch, a tradition in Port Gibson.” Mr. Person says Miss Isabel’s house, “although showing some neglect (Miss Isabel could afford the maintenance but couldn’t stand the inconvenience), is still a beautiful thing to see.” Oh, if only… *heavy sigh* 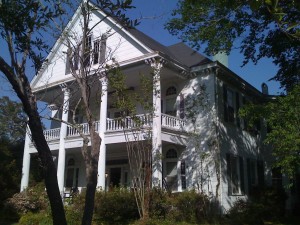