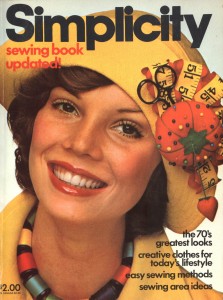 I had to have it because I actually thought that they’d have instructions for how to make the hat. Yes, I thought that 1) the kitschy fisherman’s hat adorned with pincushion (with pins, no less), scissors, and measuring tape-turned-bow, would be awesome to wear going to rummage sales on those rainy days, and that B) a book of sewing instructions would actually include instructions for creating the item featured on the cover.

Now you might agree that I’m just plain silly for the first thing; but don’t you think a person ought to expect the latter? But no. Apparently Simplicity thinks making the hat is obvious enough. Which I suppose is better than being like that super-annoying and frustrating Science Channel show, How It’s Made, which informs you that markers are made by putting felt into a plastic tube and inserting ink into the absorbent felt. A Duh. That’s not how something is made, that’s how something is assembled from already made parts.

But my point is, while I can buy a bright yellow rain hat and all the sewing supplies, I have no idea how to attach said sewing supplies without ending up having to wear a pirate’s eye patch — and telling people that I was blinded by my own lack of sewing skill, causing a scissors to fall from my kitschy hat & skewer my eyeball.

None of this, however, dampens my desire for such a hat. Sew So, if you know how to make such a hat — that is safe enough to wear — please do tell.