From the June 26, 1950, issue of Newsweek, results of Gallup Poll regarding “how well informed the average American is on terms and phrases appearing regularly in the news.”

The result: 94 percent understood the term “flying saucers”; 68 per cent, the term “bookie.” But only 26 per cent knew “bipartisan foreign policy,” and 5 per cent, “Point Four.” 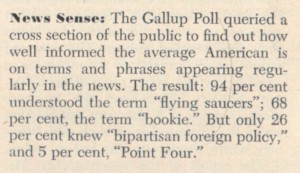 So, the titular meaning of the 95% of Americans in 1950 means that I didn’t know what ‘Point Four’ was. (I did, however, know the rest of the terms, thank-you-very-much.)

While I was not alive in 1950, one would think I could be excused for my ignorance; but it turns out I shouldn’t be — ignorant, I mean. I might still have an excuse…

‘Point Four’ refers to President Truman’s fourth point in the foreign policy objectives he stated in his inaugural address, January 20, 1949. Seeing as this fourth proposal, announced as the Bold New Program, was not only the foreign policy equivalent of the New Deal but based on similar conservation, rural rehabilitation, public works, and economic development strategies, it seems I should have been taught this in school. Especially as Point Four is what inspired president John F. Kennedy to lay the foundations for the Peace Corps in his inaugural address, January 20, 1961.

Why did my public school education insist upon making me an Ugly American, omitting foreign policy and our connected world history instead of including it in discussion of domestic policy and affairs?