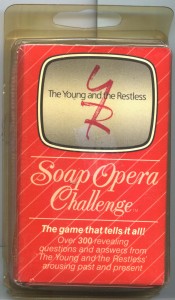 Hubby grabbed this 1987 Soap Opera Challenge game for me at a rummage sale this summer for a buck or two and I’ve just now gotten around to attempting to play it.

This particular game in the series by The United States Playing Card Company is based on television’s The Young and the Restless daytime soap. There were several others in the series — and had I either the As The World Turns or Guiding Light versions, I might have fared far better… As it is, my puny knowledge of the Y&R was limited to either my high school summers (1979-1982) when my sister insisted upon watching it because she discovered that the show’s fictional Genoa City, Wisconsin, was based on the very real — and visited — Lake Geneva, Wisconsin, and a few episodes in my freshman year of college (1982-83), when the boys in the dorms insisted upon watching it. (Though most of them locked their dorm doors and pretended not to be ‘home’ whilst watching the show, Y&R had a huge male following at the University of Whitewater; mostly the same guys who watched pro-wrestling, so no surprises there, really.)

Anyway, since the Soap Opera Challenge games are, as you’ve likely surmised, trivia games, my lack of viewing of the soap itself, especially around 1987, impedes my ability to play the game with any success. If you were a fan you’ll likely do much better — though that’s not saying much, because I stink.

However, I endeavor to be fair in my reviews and my lack of knowledge isn’t the game’s fault. While pretending that can fathom just who Jack Curtzynski is/was and so make a guess as to who his first wife was won’t quit cut it, I will focus on the game’s play. 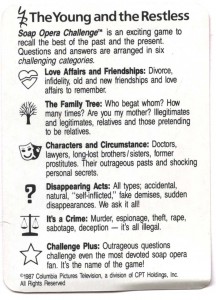 The game itself consists of a game die and deck of 54 question & answer trivia cards, categorized as Love Affairs & Friendships, The Family Tree, Characters & Circumstance, Disappearing Acts, It’s A Crime, and Challenge Plus (“Outrageous questions challenge even the most devoted soap opera fan. It’s in the name of the game!”). Each of the six categories is represented by it’s own icon (Broken Heart, Tree, Theater Masks, Question Mark, Scales, and a Star, respectively) which are then repeated on the game die.

Two or more players gather. Each rolls the die and the player who rolls the Star goes first.

Game play begins with a (fresh) roll of the die. The player to the right of the die-rolling player picks a card off the deck (with questions facing ‘up’) and asks the question which corresponds to the icon on the die. If the question is answered incorrectly, the card is placed at the bottom of the deck and the player on the right begins their turn. If the question is answered correctly, the roller keeps the card and rolls again until she gives an incorrect answer.

When there are no more remaining cards, each player counts the cards they ‘won’ and the player with the most cards (correct answers) wins.

There also is a Solitaire version of play. In this version, the player draws a card from the deck, rolls the die to determine the question category, and takes a stab at answering 54 questions (one question off of each card). Cards answered correctly are placed to create a ‘yes’ or ‘correct’ pile; cards answered incorrectly are placed to create a ‘no’ pile. After going through the entire deck, the player counts all the number of cards in the ‘correct’ pile:

If there are 27 or more cards in the ‘correct’ pile in front of you, you are a winner and a devoted soap opera fan.

If there are less than 27 cards in the ‘correct’ pile, don’t take it to heart, these questions are truly a ‘Soap Opera Challenge.’

Again, I can’t really experience the joy of playing, let alone winning, this game; but if you are a Y&R fan — who knows the show’s history — I can’t see why you wouldn’t dig it. A gaggle of giggling girl’s night guests who know the soap opera’s score (and who scored with whom) would have fun; and lonely girls with a half-gallon of ice cream could distract themselves well enough.

And, if all else fails, you could turn it into a drinking game by having the loser take a shot for failing. Just be sure that stinky players such as myself do not drive themselves home. 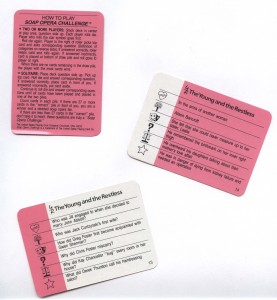