In her post, Phony Feminists and Super Bowl Commercials, Karen Townsend says that the “outdated, outmoded, out of touch [with the] feminist movement” females who’ve “loudly bellowed” in a “snit” that CBS — a network which has blocked other advocacy groups from such an opportunity — would give a radically anti-choice group like Focus on the Family a platform to expose its extreme agenda to millions of people have “hijacked a perfectly good movement have brought shame to those of us who are feminists.”

They have given the term a bad name.

What was the snit about? CBS allowed the showing of a message ad, not allowed before in Super Bowl time. The message? A pro-life testamony given by the mother of widely known college quarterback, Tim Tebow. The silliness of the brouhaha was evident, once the audience actually saw the commercials. Not only were they so benign that if you were not paying attention you may not have realized what the message was-

I hate to interrupt Townsend, but as this is writing, not speaking, and it’s easier to read if I respond to points as they occur, I will interject. Spelling errors aside (it’s “testimony,” not “testamony”), it’s not wise to label something as a “brouhaha” or “benign” when your evidence is that the message isn’t discernible to those who are not paying attention; “not realized” is the definition of not paying attention, and inattentiveness is quite often a danger to one’s health. The only “silliness” here is that her last statement completely refutes the former statement.

…now they are complaining that one of the ads promotes violence against women. Why? Because in one of the ads – they were run in a bit of a story line – Tebow appears to tackle his mother and then she bounces right back up. Obviously done in a campy kind of humor, the loud in the feminist movement have been reduced to whining over a non-act. There was nothing to their concern over a pro-life message ad, so they had to do something to attempt to save face.

They are shameful and not at all effective.

Personally, as a subscriber to several “feminist” and/or pro-life newsletters, I didn’t read any such commentary regarding the campy tackle violence. And Townsend didn’t link to any such statements, let alone from any organizations. (I’m sure I could Google for such things — but then this conversation would veer off-course.) But I can tell you that personally, my ire over the ad aside, I am a feminist with a sense of humor who did see the mother-son tackle as “campy.” And I’m a survivor of domestic violence and other violent acts directed at me because I am a woman. Many feminists have a sense of humor. Even about “touchy” issues. 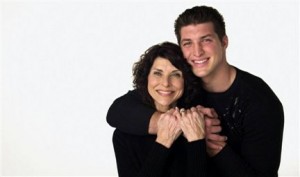 Townsend says those of us who were offended by the ad — or, more specifically, the hate group which sponsored the ad being allowed to spew its tainted philosophy while other groups are not allowed to use the network’s time and powerful audicne pull for their messages — are “shameful and not at all effective.” That’s a two-pronged argument; with neither prong supported.

To stand up for what we believe in, to point out unethical practices — especially those which will limit our message, is not shameful. (The misogynistic, unhealthy, fear-based, hate-filled, discriminatory, and down-right mean “focus on the family” that the Focus on the Family organization has is what is shameful. That organization is unmistakably not only anti-choice, but anti-birth-control and anti-sex-education, as well as anti-gay.)

Since Townsend did not define what “effectiveness” would be, it’s difficult to debate her. Obviously the campaign to motivate CBS to reject the commercial was unsuccessful. But such a “brouhaha” has also helped expose the lies in the ad. And overall the “loud bellowing” has done what Palin et all do for the far right: motivated the base. Hardly ineffective.

Sad, really. Many women who have come before all of us worked very hard to make the lives of us better today. We stand on their shoulders. These women make a mockery out of serious women everywhere.

Despite my early mention of a sense of humor, I am indeed a serious woman. A woman, even a feminist, can possess both traits.

And I thank the women and men who came before me, working to ensure that both myself and Townsend would have the right to be heard, among other things.

I would just agree to disagree, but how can Townsend or anyone else say that feminists such as myself “have given the term a bad name” when they themselves seek to limit the rights, the equality, of women?

Seeking prohibition on female autonomy, free will, and health is not “feminism.”

Townsend finishes her post with this parting shot which exposes her ignorance of the actual issue at hand:

Hey, did I miss all the outrage by the loud over the Go-Daddy commercials? Now, those are demeaning to women.

The point of our “snit” was not the demeaning sexual message, or even the message of anti-choice; it was the unethical practices of CBS. First to allow such advocacy on the network when other ads from other organizations with a different point of view or agenda are not allowed. Second to allow false advertising.

Such unethical practices should offend everyone, especially those in a capitalistic society, where the free hand of the market is supposed to dictate fair play; if an organization has the funds for the ad, they ought to be able to buy it. Or, if the network’s policy is slanted or assists a specific agenda, it out to be stated clearly so that the consumer can make a clear choice about consumption — surely that’s one choice you can agree to.