I’ve thought my Great Aunt M had lived through some amazing changes — suffrage, working during WWII and returning back home when the men came back to claim “their” jobs, the choice not to have children in the atomic family age… Amazing cultural shifts in one lifetime.

I’ve long been aware of my mother’s experience — but usually from the point of view of what it’s been like to have been her daughter. She was the first and only mom I knew who consistently worked outside of the home. At first it may have just been for the money; waitressing and the like. But by the late 70’s she was progressing from “just an office job” to reading The Assertive Woman

, attending workshops on how-to-dress-for-success, and actively pursuing a career. As the only kids in the neighborhood — and in our family — with a wanting-to-work mom (and a father who supported her choice and her work), my sister and I had a different perspective of women’s lib: equal parts of liberation, greater responsibilities, and increased expectations. …This could be a long post by itself. 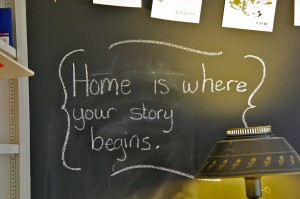 She and I had been discussing how different my sister and I are (I’ve always said that if we hadn’t been born sisters, we never would have met), and I said, “I could understand it better if she and I had been born further apart, but there’s only a year and a half separating us — we were raised by the same parents, at the same time in their lives.”

And then that’s when my mom shared some stories that rocked my brain.

When my mom was in high school, this would be the late 1950s, she wanted a summer job. Her father said he would recommend her to the diaper washing service next to his auto-body shop if she promised to work every single day — not miss one day, or ever be late. She agreed, he made the recommendation, and she got the summer job.

She went in to work every day, all summer long. Then one night, she and her boyfriend — her first love, broke up. She spent all night crying, as teenage girls will do. When she woke up and her father spotted her in the hall, he asked her why she wasn’t yet dressed for work. She responded that she was a mess, that she could barely see through her puffy eyes, that she wouldn’t be going into work that day. Her father looked directly at her, said, “You gave your word,” then turned on his heel and left.

Mom quickly got dressed and to work on time.  She never missed one day of work and lived up to her word.

When it came time for her younger sister Vickie, mom’s junior by nine years, to get a summer job, Vickie only worked four days before she quit. Years later, when having some sister-chat, my Aunt Vicki asked her sister, my mother, “Why didn’t they teach me to be responsible, like they did you?”

My mom’s response was, “You came along at a different time in their lives; you were their baby and they had different expectations of you.”

That is probably a fair analysis. And an amazingly insightful, non-spiteful, response from my mother to boot.

But my mom wasn’t done sharing her stories.

A few years after the summer laundry job, my mom worked full-time as a secretary at a finance company. This was at the same time that her brother, Mike, just two years her junior, was working at Pabst. My mom was paying $15 a week in rent to her parents. She thought nothing of it until she discovered that her brother wasn’t paying anything to their parents.

When she asked her parents why she paid rent and her brother did not, the answer (given in that “you’re so silly to ask” tone of condescension) was that “she was working for pin money, but Mike was a man.”

Even though “Mike the man” wasn’t supporting a family (his paycheck went to purchase beer), the assumption was that he was working for a future, that his paycheck and job were more important. He was expected to work; she was not.   The price for her frivolity in dabbling in employment was one she would have to pay for.

Even now when I think about this I am amazed. Not just that this greatly shifts my perception of my beloved grandparents, who were a product of their own times, but that my mother who was raised by and living with these people had the guts to question her parents about this gender bias.

But that’s not even the worst of it.

When I expressed my surprise and shock — including that I’d never heard these stories before, my mother shared one more…

This one is about my cousins, Lisa & Danny, who are my Uncle Mike’s kids.

Recently, my cousin Lisa was out to lunch with my mom and she confessed that both she and her brother felt they never pleased their father; Danny for not being a macho sports guy — and Lisa for not being a boy at all. It was so bad that Lisa said, “You know, my mom never read to me. Not once. She read to Danny.”  And then she rapidly tacked on — as if risking being accused of being unfair or mean-spirited,  “I could listen though.”

Images of a small shy child silently lurking in the doorway while a mother snuggled with a sibling on a bed, reading to him from a book he’d selected… *shudder*

I always wondered why my cousin Lisa was so shy — painfully so. Ill-confident, uncomfortable in her own skin.  How can you be anything else when your own parents don’t think you’re worthy of being read to because you’re not a male child?

But here it is, gender bias bullshit, from real lives, not text book depictions; from my family, some of it even in my lifetime.  It’s real. It’s still living here, if only in echos. And poor self esteem.