The most famous element is the musical scene where Red performs and “Wolfie”, as she calls him, reacts in highly lustful wild takes. Those reactions were considered so energetic that the censors at the time demanded cuts in this scene and others.

The film’s original conclusion had Grandma marrying the wolf at a shotgun wedding (with a caricature of Tex Avery as the Justice of the Peace who marries them), and having the unhappy couple and their half-human half-wolf children attend Red’s show[citation needed]. This ending, deleted for reasons of implied bestiality and how it made light of marriage (something that was considered taboo back in the days of the Hays Office Code), was replaced with one (that, ironically, has also been edited, but only on television) where The Wolf is back at the nightclub and tells the audience that he’s through with chasing women and if he ever even looks at a woman again, he’s going to kill himself. When Red soon appears onstage to perform again, the Wolf takes out two pistols and blasts himself in the head. The Wolf then drops dead, but his ghost appears and begins to howl and whistle at Red same as before.

Prints with the original ending (where the Wolf is forced to marry the lusty Grandma) and the Wolf’s racier reactions to Red are rumored to have been shown to military audiences overseas during World War II, though it is not known if this print still exists.

‘Cuz suicide is funny. Or at least suicide, like most violence, is preferable to sex.

And in on of the weirdest decisions regarding bestiality ever, it’s only offensive if the woman is older — and lusty. 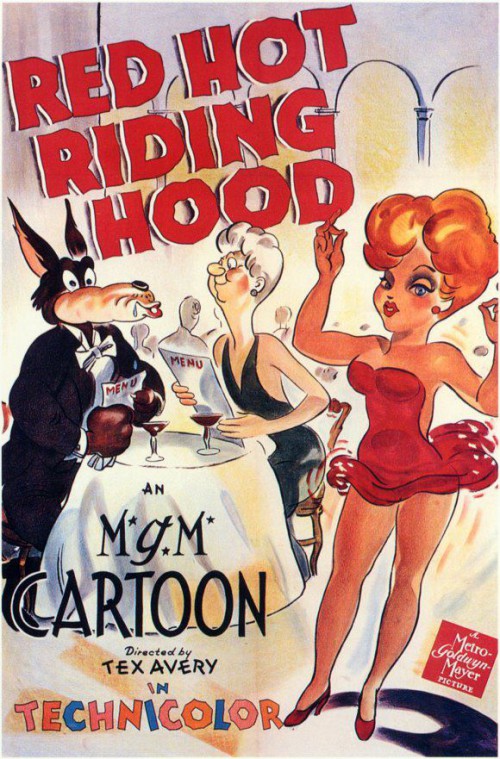