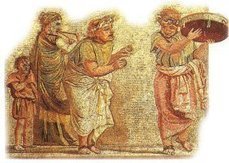 Cytheris was born a slave in the latter days of the Roman Republic, about 70 BCE.  Her parents were probably Greek, and her name (deriving from Cytherea, one of Aphrodite’s bynames) may not be the one she was originally assigned at birth, but rather one she adopted (or was given) later when it became clear what her profession would be.  She was the property of the wealthy and ambitious Publius Volumnius Eutrapelus, an enthusiastic patron of the theater, who had her trained as a mime and introduced her to the theater in her early teens.  Roman mime was not the silent niche-art it is today, but rather a blend of singing, dancing and acting, much of it improvised; it is therefore more closely akin to vaudeville than to Mummenschanz or Marceau. As I mentioned in “Meretrices and Prostibulae”, most mimes – like most actresses for centuries before and millennia after – were also prostitutes, and Cytheris was probably in the group of mimes who in 55 BCE began the tradition of ending the Floralia with a striptease (the public sex was not added until imperial times).