As I mentioned, I’m downsizing; so lately, I’ve primarily been focused on listing in our Etsy shops. (1, 2, and, now, 3.) This has led to lots of posting at Things Your Grandmother Knew and Kitschy Kitschy Coo. (But don’t worry, the next stack of ephemera has plenty of “women’s issues stuff”, so then this blog will be busy. To everything, there is a season…) 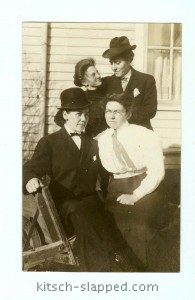 One of the more rare items I am parting with is this antique real photo postcard featuring two female couples. I’m rather certain this is a legit “lesbian interest” photo, as it is called in the trade, and not some mere drag party of the past. However, without any living folks to tell the tale, it is hard to say definitively. There is a certain combination of affection and defiance as opposed to the hamming it up for the cameras which is usually found in ye olde crossdressing and drag parties and films of yore.

This reminds me of the fact that many sellers will call any photo of same-sex folks being affectionate as LGBTQ history. Rather than rant about that, I will simply direct you to where others have done a good job covering the issue: Brothers In Arms (NWS), naked Vintage Soldiers (NWS), and Touch Isolation: How Homophobia Has Robbed All Men Of Touch. (It is perhaps no surprise that all of this talk involves men, not women, but then “everyone loves a lesbian.” …Well, almost everyone. Everyone does love Lincoln, however.)

Yes, I’m still Tumblr-ing and Scooping. (You might mostly be interested in what goes on at the women Tumblr tag and the Herstory & Dare To Be A Feminist topics.) But I have still managed to make a bit of time for reading…

What I’ve been reading: 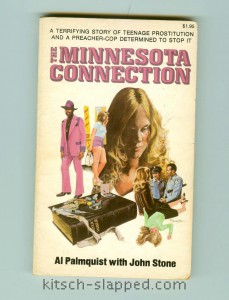 My friend Gracie compares the past and present of sex trafficking: 1978’s The Minnesota Connection Vs 2015’s Trafficked: The Exploitation Of Women & Girls In The Bakken & Beyond. (Oh, sure, North Dakota, sex trafficking gets coverage, including a 30 minute news documentary; but the environmental damage being done in the Bakken and the related train bombs notsomuch. The legislation is even worse.)

Speaking of politics… Oh, if only!

Yes, as a collector of vintage magazines, I am very aware that little has changed in beauty ads.

At ErosBlog, Bacchus discusses (NWS) this article at The New York Times. (See also my earlier article: Grandma Was A Swinger: Estate Sales & The Ephemera Of Women’s Lives.)

That’s it for now; time to get back to work listing the collectibles.