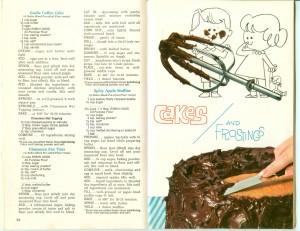 I’ve been collecting vintage cookbooks (and other ephemera) for decades. But it’s not because I actually cook. Other than baking, I nearly hate cooking. Thankfully, my dear hubby is the cook in the house. (Aside from baking and cleaning, I tend to stay out of the kitchen.)

So what is my interest in cookbooks then?

There are many other things to be found in cookbooks, especially the vintage ones. I am particularly fond of the thrift tips and, because I am an antiques dealer as well as a collector who likes to live with old things, I find the cleaning tips quite helpful. And who doesn’t love the old graphics? But primarily my interest in the old cookbooks lies in all the cultural clues.

You can tell a lot about a culture from its cookbooks. For example, according to this 1961 Betty Crocker cookbook (Betty Crocker’s Outdoor Cook Book), there was a Mid-Century swing to putting fireplaces in homes for cooking.

A striking change is taking place in American cooking and entertaining. The backyard barbecue is fast becoming the nation’s number one hobby as, each year, more families discover that fun and good fellowship seem to double around an open fire; that nothing is more appetizing that the aroma of food grilling over glowing coals; and that the easy informality of service under the wide sky makes even the most elaborate patio party seem carefree.

The taste of charcoal broiled meats is so delicious that many of no longer let the end of summer mean good-bye to the “Cook-out.” When the snow flies, it becomes the “Cook-in” at the fireplace or at the broiling hearth now so often seen as a feature of new kitchens or family rooms.

The popularity of backyard barbecues makes sense. They are embedded images of the Atomic American lifestyle, part of the postwar attitude that creative hobbies enhanced life and “made it worth living”. But I have no recollection of this “Cook-in” phenomenon. Was cooking with real fire inside homes — not gas stoves with flames on burners, but cooking in fireplaces and on broiling hearths — a thing? (And what the heck is a “broiling hearth”??!)

Sure, I was only born in 1964 & so have little memories of the early 1960s. However, if so many homes had such things as fireplaces and hearths for cooking, they still would have existed in the 1970s. As a kid, I went in and out of a lot of homes… Extended family, friends, the neighbors… And none of them had these cooking hot spots. 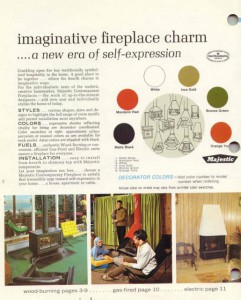 Sure, there was the whole retro mod fireplace thing (which mainly was a home decor “You had the money for that?!” statement piece), but the closest to cooking that fireplace got was when the fondue pot and accoutrement was placed on the coffee table near it. (Majestic, Malm

, & Preway were the names in Mic-Century Modern fireplaces.)

Should General Mills be telling the truth, and not having Betty blow some marketing sunshine up my apron, there are other reasons that I likely know nothing of this “cooking with fire in the home phase” of American life. Primarily this boils down to the socioeconomic status of my life.

We were Middle Class folks, yet not the Upper Middle Class sort who were building their own homes. Plus, in my family, my mother worked — as in she had a career. Cooking was no longer her main focus — if it ever had been. (I married a man like Dear Old Dad, one who cooks!) As a result of all of this, the trendy “cook with fire inside” thing likely was a trend my parents were neither interested in nor one they likely could afford. (We were, however, early adopters of the microwave oven.) 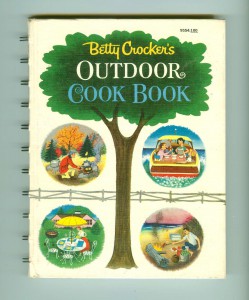 Thanks to a number of things, I really have done no better in socioeconomic terms than my parents. To keep it simple, I am a 99%-er. While I am in the midst of slowly restoring a century old house, I have no plans for internal cooking with fire options. (I am no cook, remember?)

Anyway, while we slowly restore that house, we live in a very small house — and too much stuff. So, we are downsizing, including our personal collections. (In part why I have been so quiet at this blog; it is time consuming work!) This means that I am currently listing a lot of my antique and vintage cookbooks in our Etsy shop. And other items from my other collections, such as vintage and pulp paperbacks, will be there soon too. Along the way, I will do my best to share interesting tidbits from these items here and at my other blogs (see links under “Deanna Elsewhere”).