Or at least that’s what I see in this photo. 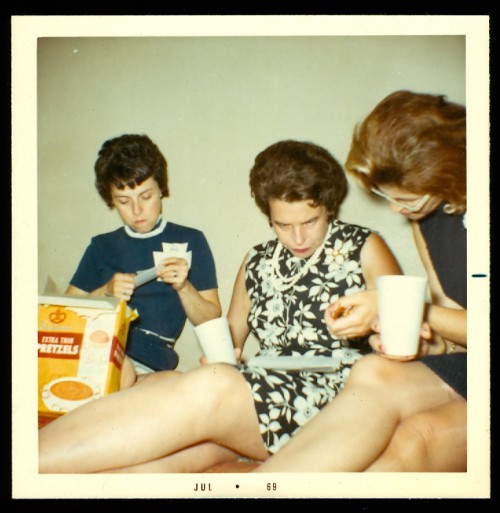 When Chelsie Hightower & Mark Kanemura Dance danced to Leona Lewis’ Bleeding Love on So You Think You Can Dance (choreography by Napoleon & Tabitha D’Uma), I was mesmerized…

But the lyrics disturbed me; doubly so when the girls, my daughters, began singing it. Especially the chorus.

Now, technically, according to the full song lyrics, neither the cutting nor the bleeding is real; it’s metaphorical teenage poetry expressing the pain of trusting and loving after having been hurt before by others. But…

Whoever “they” is, be it family or friends, why don’t you trust them?

I know it’s social acceptable — required, even — for teens to rebel. (And love songs are filled with teenaged angst & longing, even if they aren’t of the pop variety — which Bleeding Love is.) Teens aren’t supposed to trust their parents. But parents are the very same people teens have to thank for keeping them alive all these years. They don’t have an ulterior motive. They want you alive, safe & happy — even if your definitions of the latter differ greatly.

And what if it’s your friends who don’t like the guy — or girl? OK, occasionally, you have a frenemy who wants the dude (or babe) for themselves… But if you aren’t wise enough to keep away from frenemies, you probably aren’t mature enough to date (or have sex) anyways.

My point is, unless what “they” say is that you shouldn’t date or be with him is because he’s too short, or her nose is too big, or some other superficial thing, shouldn’t you at least listen to their reasoning & evaluate it for yourself?

Oh, you might be temped in that dramatic romantic way to believe you know more than “they” do — but really, why would “they” try to pull you away unless they saw or knew something was bad or even dangerous?

Ignoring the people who’ve known you longer, if not better than anyone else; resisting the warnings of the people who’ve cared for you, invested time and money in you, because you want to be right or play Romeo & Juliet, is not maturity. (See comments about frenemies.)

It scares me when I hear songs with lyrics like these… Hear people singing along, like it’s a mantra… Romanticizing “forbidden love” to the extent that they mistake warning signs for meddling, mistake dangers for a chance to prove themselves “right” rather than being safe.

True love doesn’t hit, soul mates don’t control or hurt you, and families & friends (the “they” sung about) don’t lie about your safety — the people who love you, family members & friends, want to like & love who you love. At the very least, they don’t want to upset you — but “they” will upset you, try to pull you away from things & people who are not good for you.

So maybe there’s no reason to drink from the poison cup.

This post is part of the blogathon for Hope For Healing, a wonderful event raising awareness of domestic violence & funds for supporting victims.

And use this special link to iSearch.iGive.com to perform searches; it will raise money for HopeForHealing.Org.

There’s a whole heck of a lot of good relationship stuff on Twolia; I thought, just in case you never leave Relationship Underarm Stick, that you should see some of it…

Twolia now has a new relationships blog where you can make your own post — sort of like a forum. It covers not only dating & marital relationships, but friendships & relationships with family members & coworkers as well. Go check it out.

Over at Kitsch-Slapped, Deanna’s done the research on a sad story of romantic misfortunes that took place in the late 1940’s.

Deb Amlen (her book, It’s Not PMS, It’s You is due Spring 2010 from Sterling) has answered a letter about sleeping with your professor over at Miss In Your Business.

Survived all your relationship stink, and now you’re getting married? Congrats! Now see what you need for your wedding over in the Twolia Shops.

Married, single, divorced, whatever your situation, music tells your story. You know… Without breaking up and making up, there might be no music… So check out the music on Twolia — I’m digging Bri Anne Michelle and Ellee Ven’s Dangerous Diversion. (Yes, I can enjoy pop-country & hip hop too; how about you?) 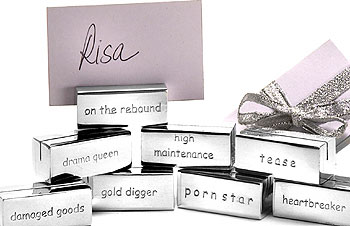 But with labels such as “tease,” “high maintenance,” “gold digger,” “drama queen,” “damaged goods,” and “on the rebound,” I think they are perfectly wonderful for any good old-fashioned get together. Sure, for girls’ night, but how much fun to use as a party game in mixed company –with couples too — where you either…

A) turn the moniker away from the chair, facing the rest of the dinner guests, and have each guest guess what their label is

Or, B) you hand one to each guest as they enter, and have them act out their label, making the other people guess what their personality/circumstance is.

Naturally, all your guests will need to be both secure enough with themselves not to take anything personally as well as have a good sense of humor about the whole thing. But you’re cool like that, so you must have friends that cool too.

(Or at least you are wise enough to know better than to get these placecard holders to begin with.)

Single or not, don’t forget to celebrate Christmas with your girlfriends! 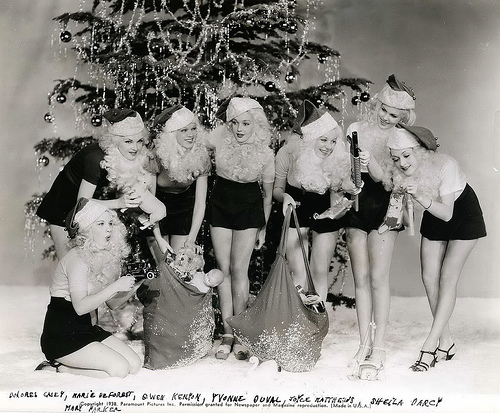 When I decided to start this blog I figured that I’d need a base of questions to work with. Sure, I have my ‘classics’ to share with you (and I will), but it could take awhile before those of you reading here are brave enough to send in your questions (more info on that here). So I gathered twenty of my friends and assigned them the task of filling out a blank piece of paper with one of the following:

a) a relationship question they’ve always wanted to ask, but been to shy/embarrassed/uncomfortable to ask

I thought I’d have problems with them filling out the papers — I even had a complicated plan for them to use my computer, instructions for folding the paper the same way, so that I couldn’t tell who wrote them. But amazingly I received 36 good questions and lots of loud laughter.

What this tells me is that your friends probably have a lot more questions & concerns than you know about — they’re just waiting to be asked.

We usually behave on the old friendship rule of Don’t Ask, Don’t Tell — meaning we wait to be asked to offer our advice, but may of our friends are just waiting to be asked to unburden themselves. So, this busy holiday season, you may want to make the time to ask your friends for their advice (you’ll find they are rather willing) as well as make sure your friends know you are really open to helping them with their relationship stuff. If nothing else, you’ll improve your relationship with your friends.

Anyway, all this gives you an idea of where this blog is heading, what you can expect.  There will be lots of questions, lots of answers, and lots of laughter.