In the June 2009 issue of Cosmo (you know, that magazine I neither subscribe to, nor like), the perplexing page that is number 98, titled “Fun Fearless Female,” a Q & A about T & A with Anna Paquin: 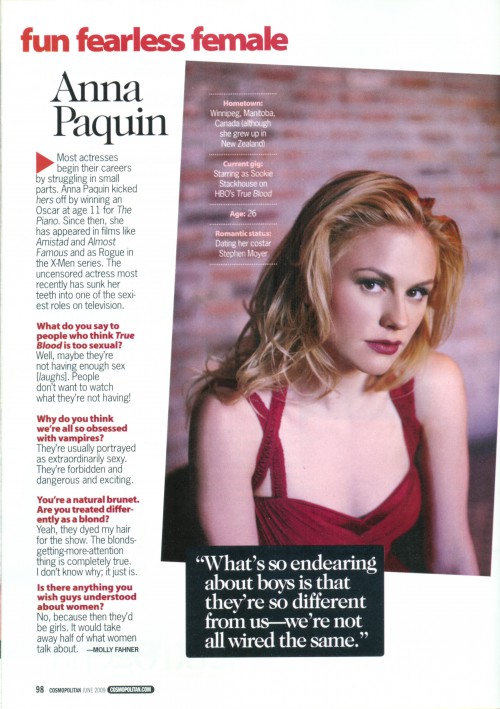 Is there anything you wish guys understood about women?

No, because then they’d be girls. It would take away half of what women talk about.

First of all, Cosmo, why does a (supposed) women’s magazine care about offering advice to men about women?

And second of all, Anna, I don’t know anything about you & your friends… But speaking for myself and my friends, we’d rather talk about — and listen to — pretty much anything else other than “my man doesn’t understand me.”

But that’s not the really creepy part.

As captioned by Anna’s photo, a quote from Ms. Paquin:

What’s so endearing about boys is that they’re so different from us — we’re not all wired the same.

Um, Anna, it’s really & truly creepy when a grown woman (and your age is listed as 26, so if anything, you’ve shaved a few years off that number) refers to possible male relationship candidates as “boys.”