When I spotted this authentic retro Q*Bert “a board game based on the exciting arcade game” (Parker Brothers #0142, © 1983, Gottlieb & Co.) at a rummage sale, I was excited. The box felt so light, I had no idea if there even was a game & pieces inside — but I didn’t dare to even open the box there; I just wanted to buy it and get out of there before the $5 price went up. 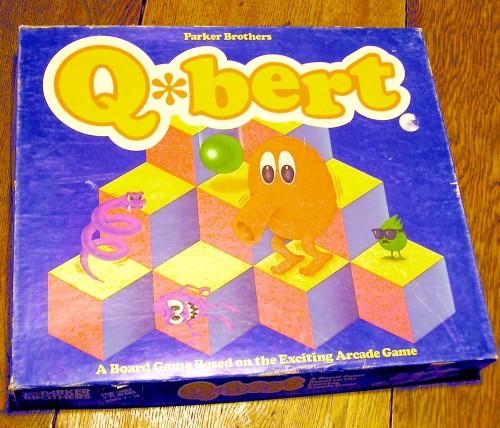 No, I’d never played Parker Brothers Q*bert; I was a freshman in college when this hit the market in 1983, and boardgames, especially for ages 7-14, were so not cool. In fact, boardgames weren’t especially cool then. Arcade video games were where it was at and any college bar worth visiting had them.

My college roommate, Sue, and one of our dorm-mates, Nora, were especially obsessed with Q*bert. I myself never mastered it; artist Jeff Lee’s pyramid of cubes inspired by M. C. Escher made me dizzy and I too often jumped myself (or Q*bert) off the pyramid. But when I spotted the retro board game box, I was so flooded with memories…

I told myself that if I did indeed now possess a complete game, I would probably be better at it than the old video game. And if I didn’t, it was a cool retro nostalgic piece. How could I lose?

Surprise, surprise! When I opened the box, I found every last piece was there (save for a standard 6-sided die, of which my drawers are plentiful). So I made hubby come over and play.

The game is a two-player game, with each player playing two rounds: one as Q*bert and one as the “nasty” characters, Coily, Red Ball, Ugg, Wrong Way, Green Ball, and Slick. (Don’t worry, you’ll only play one at a time, determined by the roll of the dice.) 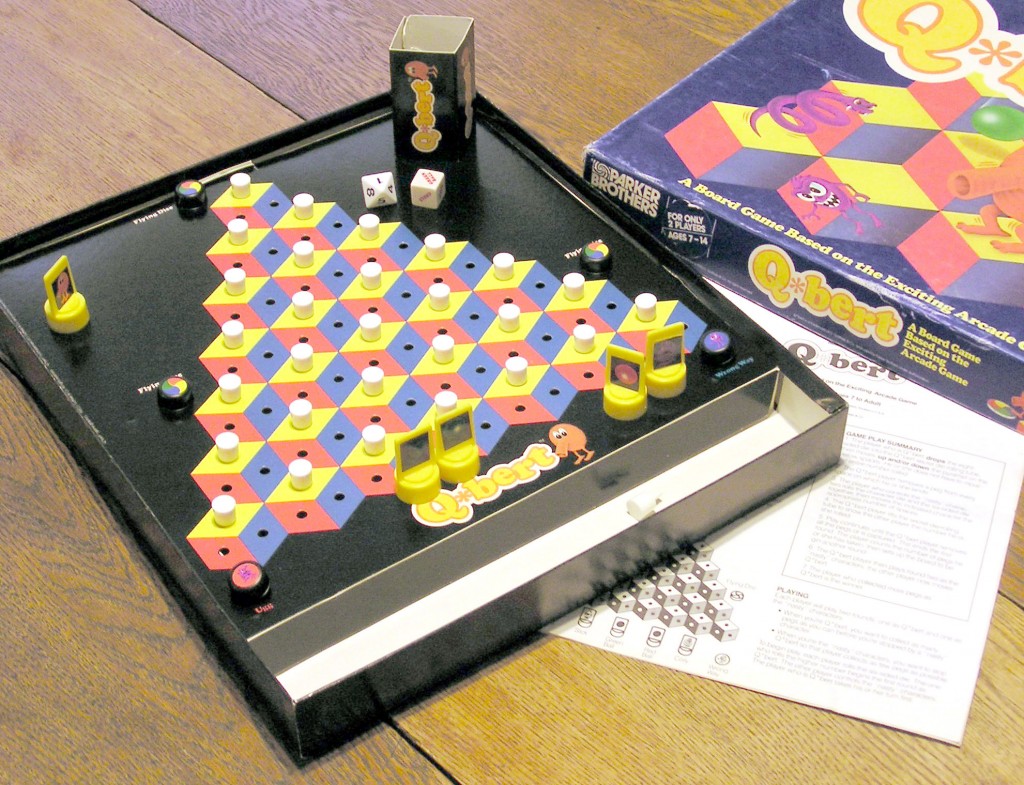 The player being Q*bert goes first. He or she drops the 8-sided die into the “Q*bert secret die-rolling tube” and then moves, like video Q*bert, up &/or down the pyramid on the yellow spaces, taking white pegs from every space Q*bert travels. The Q*bert player does not have to move the entire number rolled (more on that in a minute).

Then player two, as the “nasty” characters, goes. He or she rolls the character die and the 6-sided die together, revealing just which “nasty” character will move how many spaces — the chart on the back of the gam’s instruction booklet tells you A) where each character starts, B) the direction of their movement, and C) how or if Q*bert can be captured by said “nasty” character.

If a “nasty” character captures Q*bert, Q*bert may be saved if the player moving/being Q*bert did not move the total number on the dropped 8-sided die — those unused moves on the pyramid may be “escape moves.” If Q*bert cannot be saved by an escape move (just moving away or by using a Flying Disc), then that round is over and the total number of pegs collected are that player’s score for the game.

The players reset the board & switch roles (and drops and rolls of the dice) and play again. Whoever collects the most pegs as Q*bert wins.

Considering the game is for ages 7 through 14, the instructions are rather complicated… (This makes me wonder what lays beneath the round blue “for Only 2 Players, Ages 7-14” stickers — do they cover up other recommended ages?)

Yeah, if you remember Q*bert at all, each character’s movement sounds familiar… But it was a hell of a lot easier when the 1’s and 0’s of the program did it. Even if the pyramid on the screen made you dizzy & end your turn/game early while your friends played for hours.

Overall, the game is fun for the sake of nostalgia; but not so much fun to play. And, as a board game lover (even of kiddie games), it pains me to say it.