I was kitsch-slapped myself, reading this line (in one my feeds) from Linda Lowen’s post regarding Farrah Fawcett’s death:

Considering the fact that Fawcett was one of those impossible-to-live-up-to female images that feminists rail against, there’s been surprisingly little commentary about her passing or about her role in pop culture history from feminist circles.

Ugh, where do I even begin? 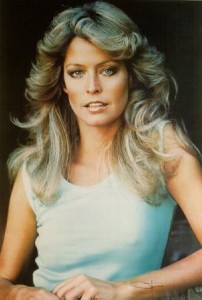 I could try to rectify the “little commentary from feminists” comment by showing all the other posts I’d read (and skimmed in feeds) in which feminists eulogize Farrah; but I’m a bit too lazy — and hot under the collar — to gather them all.

Then there’s the matter of this, Lowen’s response to Lisa Westerfield’s “feminist Farrah Fawcett” piece (originally published prior to Fawcett’s death; republished the day the actress died):

Still Expected to Cook Dinner
Westerfield doesn’t make this point, but Fawcett’s marriage to actor Lee Majors (who played the Six Million Dollar Man) was more of the same old ‘Cinderella marries the Prince’ story than a fresh, modern tale of a strong woman controlling her own destiny. (Westerfield, however, does acknowledge that Fawcett had to leave the show in time to go home to make dinner for her husband each night.)

Sorry, but this is not the stuff that feminist icons are made off.

So marriage makes one less of a feminist? Or is it just specific kinds of marriages, left undefined, that Lowen doesn’t like? I can’t tell. And then she mentions the whole “making dinner for her husband thing.” So boring. But more upsetting actually that here I go again… 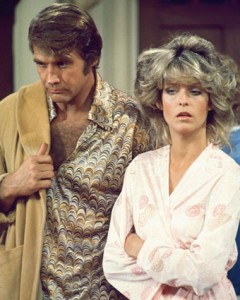 The truth is, we cannot know exactly why Farrah wanted out of Charlie’s Angel’s… Whether if was for “bigger bolder career reasons” or if she “had” to be there to make Lee’s daily dinners, or maybe, and this is too often left out of the conversation, Farrah herself wanted to be there make, serve & enjoy those meals with Majors more than be on TV. If she wanted to be there to make his man-meals after work or instead of her own career, that was her damn choice.

That’s what feminism is about; a woman’s right to choose the life she leads.

And yes, that includes the right to play 1950’s atomic “mommy” to her man. It may be, for some folks, harder to swallow than that retro lime Jell-O with its suspended carrot shavings; but suck it up & choke it down, because that’s still an option a woman has the right to choose. You have no more right to tell her she can’t than anyone else can tell her she must.

If she made that choice to be “Mrs.” rather than focus on a “career,” that is the stuff feminist icons are made of.

If she didn’t really, or freely, make that choice, as many claim, let’s look at why that would be… She went, as most women then did (and many still do — or are expected to), from Daddy’s Little Girl to The Little Woman. Breaking out of such family dynamics isn’t as easy as marching on Washington, you know. It is an individual act, done in isolation, railing against a patriarch you love; while the latter is undertaken en mass, railing against a The Patriarchy. Standing up to a man you love (whose face you adore), as opposed to standing up to The Man (who is anonymous & faceless), requires a maturity most women, especially without personally accessible role models, do not achieve until they are in their 30’s or beyond.

Isn’t that the stuff feminist icons are made of too? Or must we only be recognized if we are born with the power of rebellion, railing against things we don’t yet understand?

But what sticks in my craw most, are all the assumptions packed into one neat line in Lowen’s article: “the fact that Fawcett was one of those impossible-to-live-up-to female images that feminists rail against.”

Fact?! Who the hell says that all feminists rail against beauty? Most of us may rail against the need &/or pressure to conform to (white male) versions of “beauty,” but many of us are wise enough to realize that when a female is beautiful, impossible to live up to or not, she’s, well, she’s just beautiful.

Beauty, by itself, means nothing more, nothing less; no objectification necessary.

Nor is there a need for hatred or jealousy, or whatever pretense the stereotypical snark is supposedly serving. Such things are patriarchal constructions to divide & conquer women; crap I, and others, simply won’t perpetuate.

Some of us are also wise enough to see how beauty can & will be used against the one who possesses it. Not just in Hollywood, which rakes in money exploiting fair face & figure, while unfairly limiting actresses (such as Marilyn Monroe, Farrah Fawcett, Lucille Ball, and, recently, even Tina Fey) to (stereo)type; but everywhere.

Farrah fought against such things, not just with her stage & screen roles which eventually earned her some respect, but in her own life. Why diminish her to mean-spirited comments disguised as wit, like this comment left at Correctly Impolitic:

To mock a woman & diminish her value to only that of an icon of beauty, or “spectacular hair,” is abusive. Like an abusive spouse, such devaluation at the hands of an individual or a group culturally is an attempt to isolate and control.

To mock a woman & diminish her value to only that of an icon of beauty, or “spectacular hair,” is objectification. You are objectifying her. 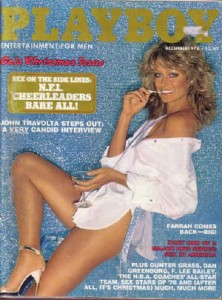 And don’t give me this BS that she’s asking for it; no one, Playboy fantasy girl or not, wants to be viewed solely for their occupation or one facet of their life.

Fawcett fought to have others see her many facets. She fought to make some decidedly feminist productions. But even if she had opted to make a career out of jiggle TV & silly bimbo roles (stuff our culture digs with a big spoon, allowing “dumb bimbos” to laugh all the way to the bank), she’d still be a feminist in my book. As long as she had choices to make & was exercising her right to choice, she was a feminist.

Why is that so difficult to accept? 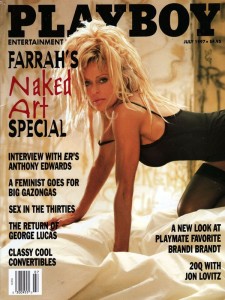 You know, it’s so damn weird that people actually spend time discussing whether or not so-and-so’s hair coloring is real — and if she colored/bleached it, if she’s doing it for the patriarchy. Why waste your time on that? Isn’t it enough that there’s an asshat ready to call you old, fat & ugly the minute you stand up for yourself or dare to assert your rights as a female? While their words are no sticks & stones that can break our bones, they are designed to hurt us, discredit us, and I resent the attempts. Are my words less important if I am ugly? No. Making oneself ugly to be taken more seriously or make one “more feminist” doesn’t work either. So beauty, even great amounts of it, do not remove one’s ability to be smart or dilute one’s ability to be a feminist.

It’s such a damn mess being a judged woman. You can be a bitched at beauty, or simply dismissed as a bimbo, one minute and then called a fat cow the next just for asserting yourself or educating another with some fact or other (maybe even for daring to mock Sanjaya). It happens at Wal*Mart, in academia, in the blogosphere, at family reunion picnics… Everywhere & anywhere. And I’m sick of it.

Stop this incessant bitching about who is and isn’t being a good feminist or feminist role model. Stop worry about who wears lip gloss, bleaches her hair, & why. Stop making snide gossipy comments about who is a stay at home mom, a working mom, or a true career woman; who does or doesn’t have kids; who does or doesn’t have a man — who doesn’t even want a man — and why. Just stop worrying about what people choose to do (99 times out of 100, it has nothing to do with anyone’s safety or your life) and start worrying about whether people have equal rights to control their own lives.

That’s what feminism & true equality are all about. 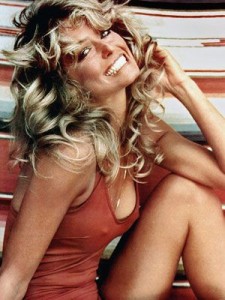 And if you’ve got spectacular hair, a killer smile, and only-too-happy-to-be-seen perky nipples, good for you. You’re beautiful! Why on earth should I make that your cross to bear or discuss if that makes you “feminist enough?” I’m only worried if you’ve got the right to make your own choices in life.

And to hell with the rest of ’em who want to put you in a box.

Especially when the only box you really are in is your coffin.

Farrah exercised her ability to choose how to live her life as best she could; and that’s as feminist as it gets.