Last night’s Royal Pains gave me a royal pain in my donkey. Normally I love the show (especially the MacGyver-medical stuff), but last night…

One of the plots in this episode (titled Crazy Love) revolves around a “passionate Latino couple” from Caracas. (I’ll spare you my diatribe on the stereotypical ick of that — and most of the hour long show’s plot — and just get to the part that makes me want to slap Royal Pains with a fine.) “Passionate Latina” Sophie (played by the lovely Roselyn Sanchez), discovers that along with paying for her boob job, her adoring husband (who is having financial troubles and so fears his beautiful wife will leave him) has had a GPS device implanted in her without her permission. This is discovered when she’s having an MRI and the device tries to pop through her chest (incredibly gross!), and gives her radiation poisoning. 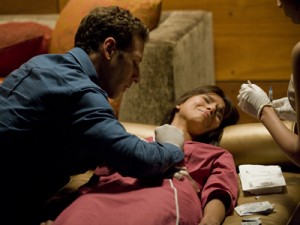 We never see Sophia upset (though the concierge doc, when confronting the husband with moral & medical outrage, tells the husband to “give her some space now” — and Divya, when asked by the doc how Sophia is doing, says, “She just keeps saying (in mocking Spanish accent), ‘Why me? Why me?'”). When Sophia lays in the hospital bed, recovering from the surgery to save her from the radiation poisoning, her sheepish husband shows up at the door to her room and asks if he may come in. Sophia says yes; he says he’s so sorry. Sophia’s reply?

(Get ready for it, because it’s so infuriating!)

Sophia’s reply to her controlling spouse who has had her secretively implanted with a GPS device so that he can track her, to a man who nearly killed her with such abusive behavior, is… “I didn’t know you loved me so much.” And then they kiss so much that everyone leaves the room.

Didn’t anyone during the writing, acting, editing — any part of making this show — violently puke at the idea of even suggesting a happy, sexy, “forgive & forget” reaction to the discovery that a man has violated his wife by secretively implanting her with a tracking device?!

I guess it’s all a-OK because he was stressed over money & insecure; isn’t that the excuse we so often offer abusers? We see the incidents (at least the reports) increase during times of economic down-turns, and we study those connections, but do nothing about it — other than use it to justify, to excuse the control & violence.  Here, in this show, literally.

And they didn’t even leave it at that!

Isn’t one woman mistaking love for abuse enough? No, you had to show us another woman craving it, thinking that’s the secret sauce missing from her happiness sandwich.

Knowing all this, doesn’t it make the episode’s title of Crazy Love wildly inappropriate? You’re going to inform us that you can check for blood type matches in a jiffy using a silver tray, but you’ll pass along the dangerous mythinformation that love = control?  Bad math, bad science, bad idea.

Shame on all of you at Royal Pains. I sentence to you to a fine of $60 million to, payable to two different abuse & crisis centers (each receiving $30 million) — one organization specifically helping Hispanic women.