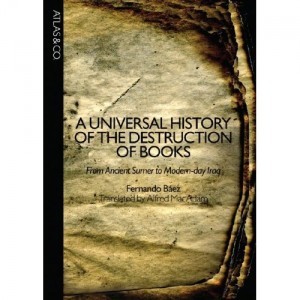 After reading So Many Books: Reading & Publishing in an Age of Abundance, I was delighted to serendipitously discover a copy of A Universal History of the Destruction of Books: From Ancient Sumer to Modern-day Iraq, by Fernando Baez (translated by Alfred MacAdam), staring me in the face from the “new arrivals” display at the public library.

I’ve always wondered just who would destroy books and libraries — and why. Here was my chance.

The book’s Introduction sums it up best:

It’s common error to attribute the destruction of books to ignorant men unaware of their hatred. After twelve years of study, I’ve concluded that the more cultured a nation or a person is, the more willing each is to eliminate books under the pressure of apocalyptic myths. In general, biblioclasts are well-educated people, cultured, sensitive, perfectionists, painstaking, with unusual intellectual gifts, depressive tendencies, incapable of tolerating criticism, egoists, mythomaniacs, members of the middle or upper classes, with minor traumas in their childhood or youth, with a tendency to belong to institutions that represent constituted power, charismatic, with religious and social hypersensitivity. To all that we would add a tendency to fantasy. In sum, we have to forget the stereotype of the savage book destroyer. Ignorant people are the most innocent.

You could take that at face value — but I preferred to continue reading how Baez came to that conclusion.

In the Note for the English Translation, Baez suggests the following:

I suggest not reading it beginning-to-end because, in its way, this book is an anthology of possible books. The reader, with no remorse, can start reading anywhere. So, dear reader, you are invited to embark on a circular, but, I hope, intellectually stimulating adventure.

Intrigued, I tried to randomly jump around — which is as unlikely as it sounds. Not only an oxymoron & unorthodox, but honestly, after six out-of-order chapters, I found myself desiring the book’s beginning to end layout which (mainly) mirrors a linear progression of time. Not only was this contextually refreshing, but, as a student of US public schools, I enjoy reinforcing what little knowledge of a time line of history I currently possess — & expanding new nuggets of information into such a stately progression was helpful too.

Along with the usual suspects in the destruction of books (natural enemies, such as fire, water, bugs, sunlight, etc.), there’s plenty of discussion, exploration, & historical documentation of those who applied the destruction on purpose. Book burning and book eating may result in the same thing as books on a sunken ship, but these actions usually had very different intents, so Baez covers the many ways to destroy books — accidental & by design. Censorship, on individual & public scales, may seem simple, but Baez exposes the stories behind the persons, passions, politics, prosecutions, and procedures.

Unexpected delights (in terms of chapters or topics — because the whole book is full of both the unexpected, the delightful, and the delightfully unexpected — even the losses are bittersweet for at least I’d heard of them now) included the chapter, Books Destroyed in Fiction.

This book not only affirmed my love of books & libraries, but reminded me how little I know… Including ignorance to relatively current events.

Like while I was very aware of the looting of museums in Iraq (especially after attending MPMA conferences), I never knew about the destruction, looting & losses libraries in Iraq suffered.

And how did I not know there was a fire at the Los Angeles Central Library in 1986 — in my lifetime? Not just any fire, but a deliberately set fire; a fire that must have been fueled with irony for it was both “the single worst library fire to take place in a nation where the most modern mechanisms for the protection of libraries exist,” and a fire started on April 28, 1986, just six days after the international Day of the Book.

Now that A Universal History of the Destruction of Books: From Ancient Sumer to Modern-day Iraq has made me aware of just how ignorant I am, I’ve set Google Alerts for library news.