This economy has everyone worried about money, and more results from that sex survey in September’s Health magazine prove it.

According to that survey, women think men would rather have more money (53%) than more sex (47%). (My husband asks, “Why not more of both?”)

And a whopping 89% of the women asked aren’t above admitting that they’d prefer a $1,000 bonus at work over sex with Brad Pitt. As one respondent, “Katrina from Scottsboro, AL,” put it, “Brad Pitt would be nice, but I’m sure $1,000 would last a lot longer!”

I’m not sure if that’s a slight against Mr. Pitt, or if Katrina doesn’t have a large balance due on her electric bill, car loan, or MasterCard… In most cases, a phone call to make a payment on any bill — even with waiting on hold &/or pressing the keypad in response to prompts — lasts less than 4 minutes. I suspect Brad lasts longer than that; Katrina, I think you owe him an apology.

The Health survey also reveals that 30% of (their surveyed) women would sell their eggs in a money crunch. And they aren’t talking about their hen’s eggs, either.

Apparently, the women Health surveyed came in a little under recent figures: “Our calls have just about doubled,” says Robin von Halle, president of Alternative Reproduction Resources in Chicago.

But the question was, “Who Came Last, Brad Pitt, your eggs, or you?” and sadly, it’s “you.” Or the women who took this survey anyway.  Because when asked to choose between financial security or orgasms every time they”do it,” 80% of the women opted for the money.

According to one “Susan” from North Carolina, she’s “perfectly happy with orgasms every other time!”

Uh, these poor women must not be having the orgasms I’m having.

I’d not trade my orgasms for money or “financial security” or all the money in the world.  In fact, my quality of life is directly tied to my ability to get off. Money may be a necessary evil; but there’s nothing evil about my orgasms.

Maybe Susan et all are “perfectly happy” with every other time… Maybe that’s a dream for them… Maybe they don’t know how to achieve their own orgasms by themselves… I don’t know. But it sure explains why they would turn down sex with Brad Pitt — even in a fantasy question. I know I can get myself a whole lot more “happy” just thinking about that than I can fantasizing about spending one grand.

(As usual, you can click the image to get a large scan.) 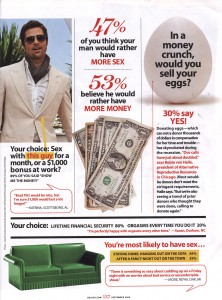