A character in the Gothic soap opera television series, Dark Shadows (1966 – 1971), Barnabas Collins was a long-suffering vampire — tormented both by his status as a blood drinker and his doomed romance with the beautiful Josette. But none of this really matters when it comes to playing the Milton Bradley Barnabas Collin’s game; it’s just a “scary” game for the kiddies. 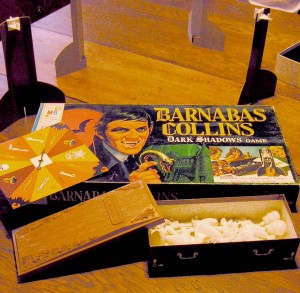 Our game is complete, save for the toy fangs which, while originally included in the game box, were “not part of the game” and ” to be used by the owner of the game when playing the role of Barnabas” (printed inside the box’s lid — twice). Of course, kids being kids, there’s also the proviso that “they should be washed before a player uses them.”

The game is rather like hangman — at least visually. Only instead of trying to spell words, you spin the spinner and try to build your glow-in-the-dark skeleton by “hanging” him, piece by piece, on the cardboard scaffolding. 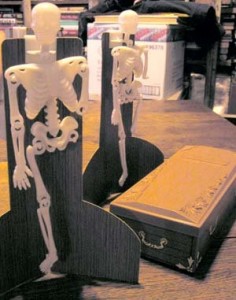 Each of the 2-4 players takes a turn spinning, hoping for the chance to collect bones/parts from the coffin. In order to begin building your skeleton, you’ll need either the skull or the body piece; so the first few spins can be anti-climactic. When the spinner lands on the ring, it’s like a wild card; the player chooses any bone, skull or body piece from the coffin.

But beware, you could land on the wooden spike space! When you do, you’ll need to take a wooden spike from the coffin; collect three of them and you’ll need to remove a bone from your skeleton (and then you may return the three spikes as well). There is an “advanced game” option, in which the player with the three spikes may challenge a player of his/her choosing to a “Vampire Duel.” (They take turns spinning to see who will spin the ring space first. If it’s the challenger, the s/he doesn’t lose a bone; the challenged player does. If the challenged player wins, the challenger must remove two bones from their skeleton.)

As game play is based upon the spinner, there’s very little strategy involved (other than having luckily guessed to use your wild ring spin to get an upper arm when your next turn gives you the lower arm, etc., it’s all chance), making it rather simplistic (even for the ages 6 to 14 stated on the box). But it’s certainly a cheap thrill — on any day of the week.

And it’s cool for Halloween — though it’s not anywhere as scary as indicated in the original television commercial (I doubt it was seen as scary then either).  But before you watch it, here’s an FYI: if you’re a Dark Shadows, Gothic fan, or just a Johnny Deep nut (perhaps all three?), Depp’s apparently signed to play Barnabas Collins in Tim Burton’s film adaptation of Dark Shadows.

Now for the word from our retro sponsor: