Once upon a time, I read romances.

First of all, they were plentiful in my youth. Not only did the popular paperback novels go from house to house as the adults around me swapped and traded books, but one of my aunt’s neighbors worked for a mall bookstore and he often went (against rules of his employment) and raided the dumpster for the paperbacks which were dumped after the covers had been torn off and returned to the publishers for credit, sharing the free books with anyone who would show up to grab copes when he put out the call.

Second of all, when in junior high our family moved a few miles away from that home near extended family, I ended up at a new school. A shy bookish sort, I was sorely in need of a friend, so when befriended by a fellow reader, I tried to read what she did. And she read romances.

I quickly gave up her favored Harlequins and turned to the bit more complicated, less predictable, suspense and Gothic romance novel varieties. But the shared romance novel reading ended quickly — even before she stole my first boyfriend.

I can’t say that the devastating loss of “Skip” hasn’t tainted, by association, any appreciation of the romance genre (they are forever tied together in my mind), but I honestly had been bored and annoyed with romance novels prior to that tender teenage heartbreak experience. Really. When I was about eight, I had practically gone from horse stories to non-fiction, so I felt silly reading predictable sappy love stories.

Yet, whenever I’ve spotted a Mary Stewart or Phyllis A. Whitney novel, I must confess, I’ve felt a fondness…

At first I told myself that this was some simple sense of nostalgia, memories of early years happily reading at my grandparent’s house while the adults played cards combined with the remembrances of myself as an wistfully romantic girl. Such things would make romance novels seem comforting — like pulp versions of turkey pot pies. Yet there there seemed something more…

Something compelled me to remember these authors and their books favorably after all these years. If I was ever going to know the truth, my truth about these books, there was only one thing to do: give in, purchase a few, and read them. 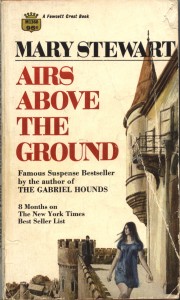 I selected Mary Stewart’s Airs Above The Ground to read first because I knew it was not one I had read before (surprising as the book boasts of the beautiful Lipizzan stallions I was so dreamy about as a youngster) and figured that would remove the potential of too much nostalgia.

My copy is a 1970 printing (thrift store score for a dollar or less), but the work was copyrighted in 1965 (a year after I was born!) and that means there are some beguilingly sexist passages for a feminist reader like myself.

On page 216, “our young wife’s” husband asks her if she can manage the “hellish” walk that lies before them in the dark; this is our heroine’s response:

He was already leading the way at a good pace. The question, I gathered, had been no more than one of those charming concessions which make a woman’s life so much more interesting (I’ve always thought) than a man’s. In actual fact, Lewis invariably took it serenely for granted that I could and would do exactly what he expected of me, but it helps occasionally to be made to feel that it is little short of marvellous for anything so rare, so precious, and so fragile to compete with the tough world of men.

For me the night had held terror, relief, joy, and then a sort of keyed-up excitement; and drugged with this and sleepiness, and buoyed up by the intense relief and pleasure of Lewis’s company, I had been floating along in a kind of dream — apprehensive, yes, but no longer scared; nothing could happen to me when he was there. But with him, I now realized, it was more than this; more positive than this. It was not simply that as a man he wasn’t prey to my kind of physical weakness and fear, nor just that he had the end of an exacting job in sight. He was, quite positively, enjoying himself.

Another favorite, from page 234, about Timothy, the son of the friend of the family who accompanies her on this mystery adventure:

Something about his voice as he spoke made me shoot a glance at him. Not quite authority, not quite patronage, certainly not self-importance; but just the unmistakable echo of that man-to-woman way that even the nicest men adopt when they are letting a woman catch a glimpse of the edges of the Man’s World.

When one removes (or forgives) such things, as (or if) they can, and reads for the story itself, what remains? 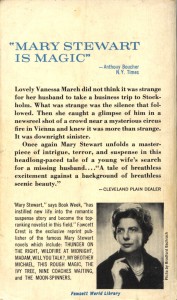 Officially billed as a “romantic suspense story” (presumably not officially labeled “Gothic romance” as it only has the air of the supernatural; there are more logical reasons for creepy mists and the seemingly impossible), Airs is not so much a will-he-ever-love-me romance as a is-my-man-a-dirty-rotten-creep mystery. This, of course, appeals to my jaded personality. So I quickly devoured the 255 pages, wondering if he is a creep, what his weak-arse story will be — and if Vanessa will fall for it (or, maybe, fall for the much younger Timothy?)

I won’t ruin the book for you with too many details or the outcomes. (However, I must tell you that the promised backdrop of Royal Lipizzan Stallions isn’t as rich and predominant as a horse-lover might like… But I’m supposed to have outgrown that romance too, right?) The bottom line is that Airs Above The Ground is, as far as expectations for a bit of romantic suspense fiction goes, pleasantly complicated enough not to be predictable.

It won’t win any awards from me; it is what it is. But I cannot disparage it. And maybe that means I ought not disparage the genre… A few more books will tell.