Feeling a bond (however imagined in my crush), I “latched” onto another common thread with artist Tamar Stone: I’ve made latch hook rugs. So I asked her to tell me about her latch hook rugs.

I began doing traditional rug hooking (using wool strips and a hand hook – you pull loops of wool strip up through burlap/Scottish linen stuff). It is very relaxing, and I like the idea that I can still be “busy” with my hands while I vegetate in front of the TV set… I tend to do this more in the winter since the wool is hot in the summer to have it on your lap. The squirrel rug was the first rug I did with Bob – he drew it, I hooked it. I had only hooked one other thing before, a pillow piece that was part of a one day class I took at the Museum of Folk Art in NYC where I met this great teacher, Marilyn Bottjer.

I’m not very good at always following the rules, or keeping in between the lines (so much of my work is like that, I always think that my idea of things “not being perfect” has something to do with my curved spine, and knowing that I was never “straight” and I tend to see things a little off kilter etc.)

Anyway, Bob drew this picture of a cabin (who knew we would own a house that looks like that a few years later) and a squirrel etc. Originally Bob was going to call it “A squirrel as big as a Cadillac” but we decided against that and then his dad – in his own corny and sweet way – said it looked like “nuts about you” so that is what we called it. 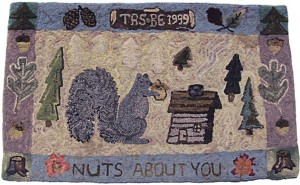 The next rug was the big map rug, which was all the road trip things from the first three years of us dating. Everything we ate, saw, bought, experienced, and photographed (I love my Polaroid camera – and the photo in the corner of the rug is the place in NH where we got engaged) in the. On the 4th year, we eloped to Iceland… But that is another story. 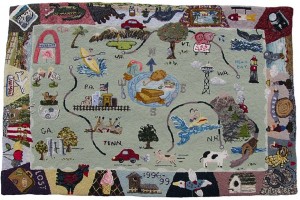